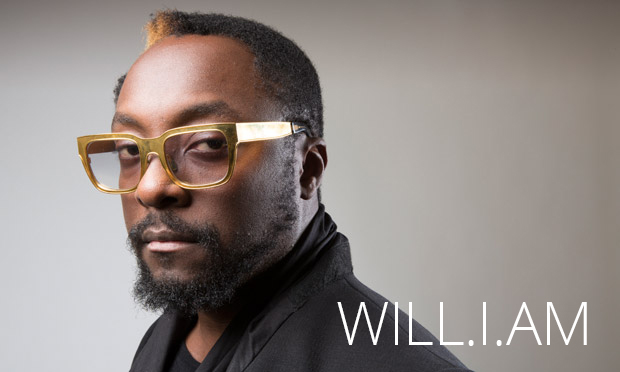 Life started in a housing project in Los Angeles where drugs and violence were prevalent, but Will.I.Am forged his own path to success through music, creativity and determination.

When Will.I.Am appeared on UK television screens on the first series of The Voice, there was an initial, ‘Who’s he?’ from the nation, yet within weeks he had a new legion of fans who were captivated by his off the cuff, straight yet charming responses to those pitching for a place on the singing coaches’ teams. With a sheepish bat of the eyes, and a, to the point, ‘That’s dope’ compliment, contestants and audiences took Will to their hearts.

Of course to some he was already familiar as a member of The Black Eyed Peas, whose tunes include the upbeat, I Gotta Feeling. It’s easy to forget that the man who today works with government to promote the creative industries, ran with the Olympic torch as part of the UK relay and performed at the Diamond Jubilee Concert at Buckingham Palace, started life in, what he describes as, a ghetto in Los Angeles.

Raised by his mother after his father abandoned the family, Will’s rise to the top of the music industry is the result of true creative talent and endless years of hard work. His mother encouraged him to be unique and avoid conforming with other youth in the largely Hispanic community in which he lived. His path into music was mapped at high school where he formed a friendship with Allen Pineda, aka apl.de.ap, who he went on to found The Black Eyed Peas with. Growing up in a rough neighborhood, life could have gone in a completely different direction.

“Coming from the projects, the ghetto that I come from, it was tough,” says Will, “You know, when your friends are, you know, dead – I can’t think of a nicer way to put it, but a lot of my friends have passed away to violence and drugs. But having good friends to make you smile about the good things – that’s why I’m always joking and laughing because coming where I come from, I’m happy that I have the friends I have.”

The success that The Black Eyed Peas enjoyed would be enough for many, but Will has taken his creative talents beyond a touring band. He has produced for Mariah Carey and Michael Jackson, and more recently collaborated with a new generation of musicians including Justin Bieber, Lady Gaga, Nicky MInaj, Justin Timberlake and Miley Cyrus.

Will has chosen another path yet again as a coach on The Voice UK, which is currently in its fourth series, this season with music legend Tom Jones, Kaiser Chiefs’ front man Ricky Wilson and new recruit Rita Ora. Following the first series, Will spoke of his love of the UK, setting up a home here, and his gratitude that the British public had taken him into their hearts.

In this experience too, Will’s belief in self-determination is key to success: “The Voice is a great platform for me to rinse out my experiences on folks who want to have a perspective, other than what they immediately know. Some people don’t realise how hard the wait is – it’s really about waiting more than it is your talent. So if you wait and you practise, eventually it will come.

“So if the folks on The Voice that join the competition want to have an immediate career, that represents success, that’s not realistic in any place. There’s luck and then there’s patience.”

Despite criticism that The Voice has yet to yield a commercially successful chart-topping artist, Will believes that success on the show is purely a starting point for any talented singer. For his part, Will has continued to nurture his former team members, most notably Leah McFall. Despite not stealing the show’s winning trophy, he – visibly emotional about the disappointment – immediately flew her to Los Angeles to spend time in the recording studio and meeting industry chiefs. “I talked to Leah maybe four weeks ago, I see JermainJackman every time I am in London – I’m a friend and a confidante,” he laughs.

For his own part, Will says that if he wasn’t where he is, he too would still be working towards his dream, although technology would be his alternative choice of career. “I like creating gadgets and apps and stuff,” he says. “I created the PULS, this device on my wrist.”

The PULS is a wearable smartphone, sold under his i.am+ company, which can determine the wearer’s emotion and mood via their voice and rewards positivity with visual displays and points. It can also store music and manage social media channels straight from the handset. An early advocate of the blurred lines between technology and fashion overlapping, Will’s previous tech products have included an iPhone camera, while he has also designed his own car.

He has also founded i.am angel, a non-profit organisation dedicated to, “transforming lives through education, opportunity and inspiration,” adding, “I hope none of the kids I send to school only want to do music. The world doesn’t need another musician. They need another Bill Gates.”

Creativity is central to his business interests and his passion for each is evident. In preparation for his role on The Voice, he contacted friend and then X-Factor judge, Cheryl Cole, for advice, later saying, “I reached out to Cheryl for advice on keeping your cool, having a poker face, the importance of sticking with the singers – it’s their dream.”

Will has been instrumental in encouraging firstly Kylie Minogue to join as a coach, following Jessie J’s departure, and subsequently Rita Ora, with who he has spent time in the studio and socialises with. “Rita and I were working in the studio on her stuff and I think people are really going to like it a lot. It’s fun working with Rita, it’s like, ‘If you could take a break from laughing and then get some work done’, because it’s so much fun and we’re just cracking up all the time. She’s been amazing to work with. I can’t wait until the UK sees how spectacular she is as a person as well as a talent.

“I mean, we’ve all known Rita, but through her music, so now you get to know her even more and it’s the reason why she’s one of my favourite people. She’s just so, you know, cool, down-to-earth, fiery, sweet, adorable, beautiful, an edgy kind of girl. So I’m glad she’s on the show and she’s been great to work with.

“Out of all The Voices that I’ve done, of all the seasons, Rita is probably the person that I’ve talked to all the time. Jessie J I got to know on the show, we hung out a lot, off and on, in between season one and two, and Kylie, I’ve seen backstage and always admired and adored, but Rita is always… it’s the first time I’m working with a friend.”

WILL.I.AM at a glance