What makes a Champion? by Sir Clive Woodward

Home What makes a Champion? by Sir Clive Woodward 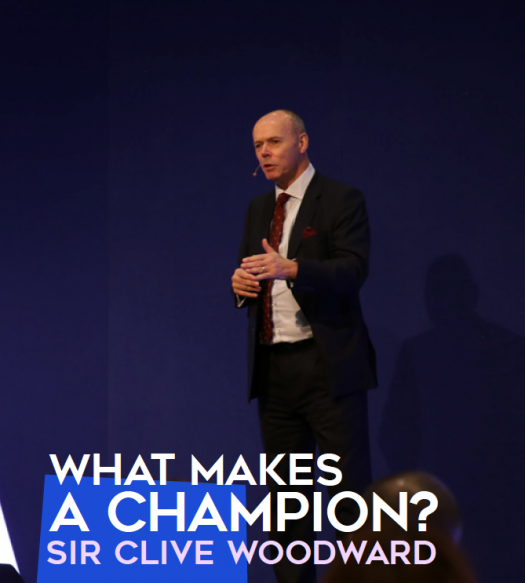 Speaking at The Best You Expo, Rugby World Cup-winning head coach Sir Clive Woodward explained what it takes to be the best

Nature or nurture? It’s the perennial question surrounding success, and so when Sir Clive Woodward presented ‘DNA of a champion’ at The Best You Expo’s Great Minds Seminar, he tapped into the heart of what it takes to be the best.

Having led the England rugby team for eight years as head coach, he has seen time and again what it takes to make a champion, and kicked off his session by saying that in his mind, “Great teams are made of great individuals.”

He continued to explain that within a team he will focus on each person and consider if they have what it takes to be a champion. At the outset is talent, but this is the starting point, he explained:

“It’s not enough and you’re never going to win on talent alone. Your mindset has got to be that other people have talent and you can’t make other people what they are not.”

Beyond raw skill, a champion has the right mindset, explained Woodward. “Teachability and a willingness to learn is key to becoming a champion,” he said. “Students who have a sponge approach to learning and a passion for their subject will always outdo rocks who have no willingness to learn. One of the questions I would ask is, ‘What do you individually do to teach yourself?’”

Woodward recalled how when he started working with the England team, he tapped into his early years after university, working in IT at Xerox. Upon his appointment he gave all of the England team laptops, prompting headlines asking, ‘Why is he not giving them more raw meat?’

“My response,” said Woodward, “was and still is, whoever wins in IT, wins. By giving a team of burly, fit rugby players laptops I could work out who is a sponge, and who is a rock.”

Woodward highlighted how he led the introduction of a revolutionary data capture tool, which allowed him to see players from different perspectives on the field of play.

“There was no hiding,” he said. “When you see your and other teams as dots and data, all the mystique of being a champion goes away – suddenly great teams become beatable.

“Having equipped the players with IT skills they were able to take their own data away and analyse their performance. Their knowledge started to increase and we studied what they do. Ordinarily this stuff is left to the analysts of the game but the IT enabled them to take an interest. It’s fascinating that you can leverage talent if you take knowledge to new levels.”

Woodward explained the stages of development that he uses to coach success – firstly to capture the information or knowledge, then to imagine the ‘winning moves’ required to succeed, before moving on to practise and perfect these.

“Imagine we are writing a book together,” said Woodward. “First you need a name and a design, plus the chapters by which you break down your business. This is the process to capture information and knowledge and stick ‘what we do’ into each chapter.

“Then we connect and share this with others, turning what we do into knowledge – the ‘why’. This is followed by practise, finding and executing practices that create winning moves – the ‘how’ – before moving onto ‘perfect’ which allows us to measure and benchmark how well we perform.”

Woodward explained how he would often role play with the England team, using a scoreboard, clock and wipe board to rehearse scenarios time and again to prepare the players for every possibility.

“Thinking about it ahead, in every aspect of life, means that when it happens in the real world there is a high chance you will act properly. “It’s an education system that means you can make the correct decision if you’ve thought it through – I call it TCUP, thinking correctly under pressure, and it’s an ability that all champions have. In fact, winners perform at their best when the pressure is at its greatest.”

Leaving an inspired audience at The Best You Expo, Woodward enabled those watching to take his learning at the top of national sport, and see the potential for their own development by using his approach and techniques. A champion session from a leader of champions.