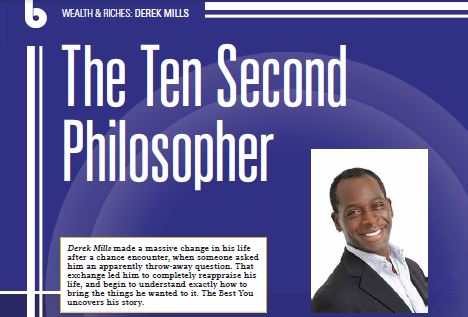 Derek Mills made a massive change in his life after a chance encounter, when someone asked him an apparently throw-away question. That exchange led him to completely reappraise his life, and begin to understand exactly how to bring the things he wanted to it. The Best You uncovers his story.

For Derek Mills, it all happened in an instant. He was working late at the office (again) when a security guard walked into the room, saw him sitting at his desk, all alone, and said:”What time did you get in this morning?” derek answered by telling him the unearthly hour he’d arrived. The security guard looked at him meaningfully for a moment and then walked away.

In the ten seconds of silence that followed, derek’s whole life changed. “I was unhappy. I was living a miserable life, was hardly seeing my wife or my children and was working incredibly long hours for a financial institution. My quality of life was very low, and I was struggling to keep my head above water fi nancially. That all changed, right then,” says Derek.

He devised a way to live, drawn straight from that brief exchange. derek is clear that life-changing events can occur in seconds, as the title of his book, The 10 Second Philosophy, implies. “Inside each of us there is a knowing – a truth inside of us. outside of us there are things: friends, jobs, careers, people, the economy, the rest of it. occasionally we get to a point where something inside of us is activated by something outside of us.

We get a vibration, a tingle, something that we respond to. It happens just for a few seconds, but those few seconds are what it’s about. It awakens the TrueSelf inside of us. A key message is to pay attention when that happens! And the more you pay attention, the more it happens.”

Derek did pay attention. He knew he had to do something different in his life. For him, the answer was to apply standards, and stick to them. Get your copy of the 10 Second Philsophy

“That might mean making sure I spend a minimum amount of time with my family, that I make sure that the clients I have in fi nancial services are the ones I want, or that I work fewer hours. I realised I needed to work out what standards I needed to have in my life – and start applying them immediately.”

This final point is an important one. For Derek, the idea of standards cuts straight to the issue. you can spend time imagining a future you really want, but in the end it’s way out there ahead of you. deciding what you will and won’t accept on a daily basis, starting now, will have the profoundest effect on your life.

Within a few months of that evening with the security guard, Derek started to see his life change. He went through his client list deciding who to keep on and who to get rid of. He was seeing more of his family. There were times when it was hard to do, but living up to his own standards made it very achievable.

Ten years on from that epiphany, Derek is hugely successful and is taking the word of his 10-Second Philosophy out to the world. He recently addressed 7,000 delegates at the Million dollar round Table in the US, and when The Best you interviewed him he was about to take his message to Indonesia. He has upcoming talks in Jakarta, Bali, Jamaica and India, and is due to address the Hayhouse Conference in California. It seems the whole world wants to hear his message. In his “day job” as he calls it, derek Mills works as a wealth manager, helping clients to make their wealth make more wealth, but his tale is far from being the story of “capitalism, red in tooth and claw”, and it’s his deep spiritual convictions that form his co-operative approach to wealth and happiness. “We are all part of the same creation.

The people I work with, everyone. I strongly believe that if we just realised that we are part of the same body, we would treat each other better. You wouldn’t do your hand harm, so why would you hurt another person? If we all made that realisation, then we would all learn to support each other. like a body, when the mind wants water, the hand acts to lift the glass. That’s how we should act together.”

His spiritual beliefs are also revealed in listening to that voice inside of you, what he calls your TrueSelf. “I believe that we all came to this life for reasons. Inside each of us there are gifts, talents, abilities, intentions and questions. It’s inside of us to be got out there for the benefi t of the world – so it’s vital to fi nd out what your talents are.”

His story is a fascinating one. It makes you realise that despite all the bad press traditional capitalism has had over the last few years, there are ways to make money ethically and to help others do the same.

The vital part is to start to listen to the voice inside, and to recognise that we all share this planet and this life together. Balancing those two elements are the foundations of The 10-Second Philosophy.