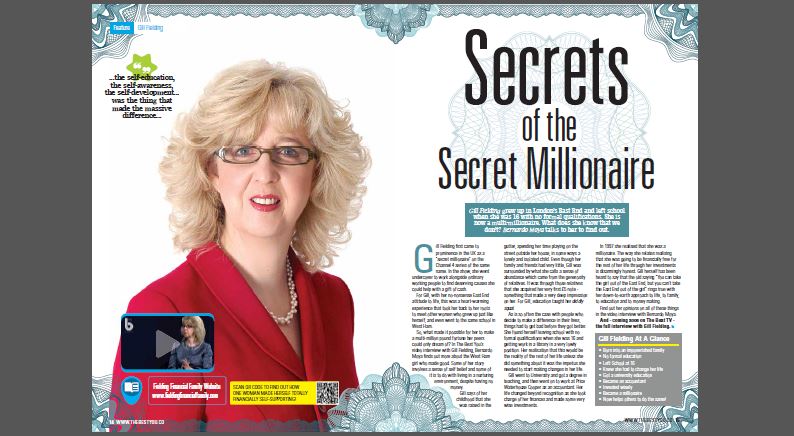 Gill Fielding grew up in London’s East End and left school when she was 16 with no formal qualifications. She is now a multi-millionaire. What does she know that we don’t? Bernardo Moya talks to her to find out.

Gill Fielding first came to prominence in the UK as a “secret millionaire” on the Channel 4 series of the same name. In the show, she went undercover to work alongside ordinary working people to find deserving causes she could help with a gift of cash.

For Gill, with her no-nonsense east end attitude to life, this was a heart-warming experience that took her back to her roots to meet other women who grew up just like herself, and even went to the same school in West Ham.

So, what made it possible for her to make a multi-million pound fortune her peers could only dream of? In The Best you’s video interview with Gill Fielding, Bernardo Moya fi nds out more about the West Ham girl who made good. Some of her story involves a sense of self belief and some of it is to do with living in a nurturing environment, despite having no money.

Gill says of her childhood that she was raised in the gutter, spending her time playing on the street outside her house, in some ways a lonely and isolated child. even though her family and friends had very little, Gill was surrounded by what she calls a sense of abundance which came from the generosity of relatives. It was through those relatives that she acquired her very first £5 note – something that made a very deep impression on her. For Gill, education taught her diddly squat.

As is so often the case with people who decide to make a difference in their lives, things had to get bad before they got better. She found herself leaving school with no formal qualifications when she was 16 and getting work in a library in a very lowly position. Her realisation that this would be the reality of the rest of her life unless she did something about it was the impetus she needed to start making changes in her life.

Gill went to University and got a degree in teaching, and then went on to work at Price Waterhouse Cooper as an accountant. Her life changed beyond recognition as she took charge of her fi nances and made some very wise investments.

In 1997 she realised that she was a millionaire. The way she relates realising that she was going to be fi nancially free for the rest of her life through her investments is disarmingly honest. Gill herself has been heard to say that the old saying “you can take the girl out of the east end, but you can’t take the east end out of the girl” rings true with her down-to-earth approach to life, to family, to education and to money making.

Gill Fielding At A Glance