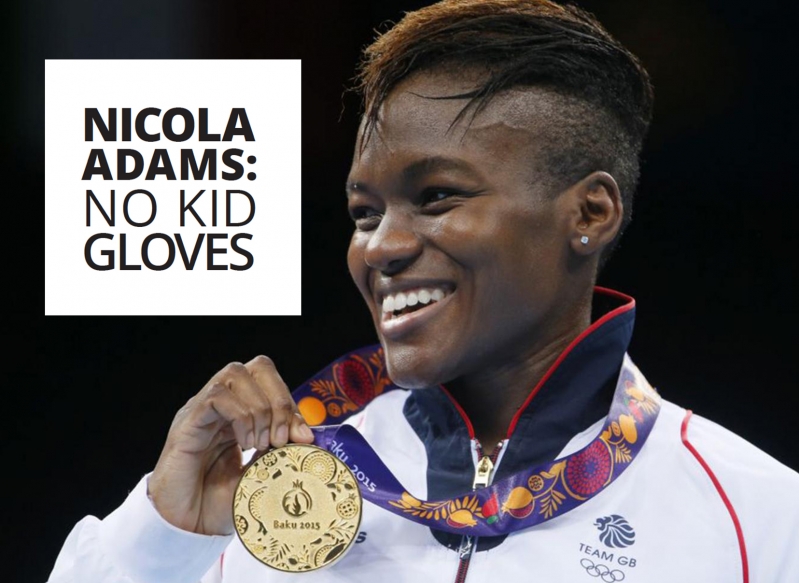 Ahead of the 2016 AIBA Women’s World Boxing Championships, we look at the career of Olympic medallist Nicola Adams, whose success in recent years has inspired a new generation of female boxers.

The life of Nicola Adams is a tale of success and overcoming on many different levels. She’s a black woman boxer following her sport in a traditionally male-dominated world. She comes from a poor background. She is bisexual, in a world which still judges people for their sexuality. And she had to overcome serious injury to gain acceptance into the British Olympic team. Her tale of Olympic gold is a truly inspirational story.

Nicola was born in 1982 in Burmantofts, an area of high rise council blocks in inner city Leeds – in her words, “not the roughest, but rough enough”. From early on, she would sit with her dad, Innocent, to watch boxing matches.

“It was always a big family thing, everyone would sit around and watch the big fights, we’d always have the re-runs on of Muhammad Ali boxing and Sugar Ray Leonard,” she says. As a girl she marvelled at the power of Ali. “I just thought wow. He gets in there and absolutely destroys all his opponents, then outside of the ring he was like a totally different person.”

When she was 12, her parents split up, leaving her mum to support the kids. She discovered boxing “by accident”, she recalls. “My mum couldn’t get a babysitter and wanted to do aerobics, so she took me and Kurtis, my younger brother, down to the gym.” There, she found an after-school boxing class. Perhaps the boxing gave her stability in the aftermath of her dad’s departure; she describes the club as, “almost like another family”.

Even this early, Nicola knew she’d found her life path. She was convinced she would win Olympic gold, even though at that time women’s boxing wasn’t even an Olympic sport.

In fact, women’s boxing was illegal in Britain until 1996, the year she started in the sport. Back then, respected boxing managers described women’s boxing as a “freak show.” Even as late as 2008, British world welterweight champion Jane Couch was banned from fighting in the UK because medical opinion was that, “PMT made women boxers unstable”.

Nicola isn’t particularly interested in the politics of women’s boxing – or of her sexuality. Her family was aware that she was bisexual by the time she was 17, but it was never an issue in her household.

Her family was always supportive. When Nicola was 13, her mother nearly died from meningitis. Nicola looked after her brother Kurtis during that tough time. After her mother’s recovery, she supported Nicola’s boxing, even though the cost of kit as her amateur career progressed meant her mum couldn’t make ends meet. Nicola then worked on building sites and even got bit parts in television shows Emmerdale and Coronation Street and carried on, an amateur dedicated to her sport, still firm in the conviction that one day she would win Olympic gold.

In 2009, her chance to realise her dream came true. Women’s boxing was accepted as an Olympic sport. That same year, Nicola was about to leave home for a fight when she fell downstairs. She carried on and won the fight, but the next day the pain was excruciating. She had broken a bone in her back. Bedridden for three months, unable to train, and in agony she didn’t believe she would box again. She forced herself to go to the final Olympic trial, even though she hadn’t boxed for a year.

With three morphine patches on her body, and painkillers to keep her going, she passed the trial. Over the coming years she got back into form.

In 2012, she realised the dream she’d had since childhood and became the first ever women’s boxing gold medallist in the 51 kg category. She has since won gold at Commonwealth and European Games.

Nicola Adams has a bubbly personality and winning smile. She avoids political discussions; for example, she avoids discussion of feminism or sexual politics in sport. Instead, she focuses on matters that will get her where she wants to be. She is a boxer, but she won’t be put into any neat boxes. “I’m just me,” she says. “I like boxing, and acting and doing my charity work.”

Keeping it simple, going for what she wants, following her passion and being straightforward with others – these are the traits that have made her a pioneering figure in women’s boxing.

At a glance: Nicola Adams