Master of Success by Bernardo Moya 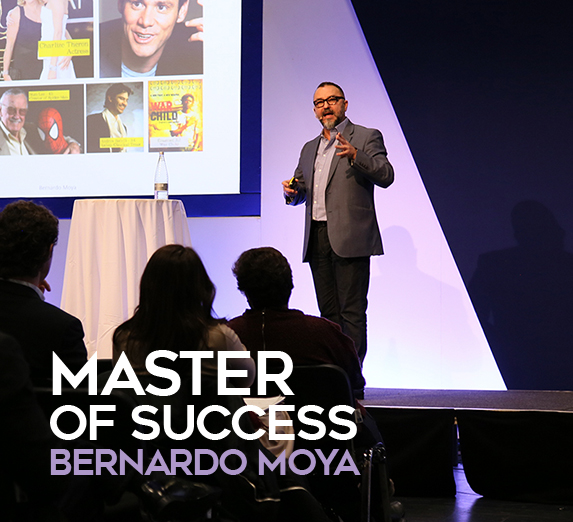 Many people have asked how Bernardo Moya became CIO of The Best You Corporation. At The Best You Expo, he spoke about his own story, about resilience and the desire to keep on going, and finally gave six steps to help keep us on track

Bernardo Moya has seen setbacks in his life, and has learned the art of bouncing back from each one.

Born in London to Spanish parents, he had a normal childhood, growing up in a loving family in Spain. Then, sadly, the death of his father when he was just 15 forced him to grow up quickly. As the oldest son, he suddenly took on the responsibility for his family, became a father figure to his younger siblings and helped his mother through that difficult time. This is what Moya calls his first black wall, and it taught him the art of toughening up, seeing the priorities and the things that you need to do to keep on going.

“It’s a question of getting your head down and focusing on what needs to be done,” he recalls. This was an early lesson he needed to learn.

The next black wall came when Moya was in his mid-twenties. By then he was working in real estate, had a wife and his first child and was living a happy life. Then, the housing market crashed. “I remember we used to save peseta coins in an old box,” Bernardo told the audience. “And I found I was down to my last 100 peseta coin. I bought a tin of lentils for the family, and I thought: ‘This is it, I’ve hit rock bottom’.”

Once again, Moya was forced to dig in and find a way to support his family. This time, he took a job selling timeshares to tourists, and within a few weeks, his fortunes had changed.

He was making money again. It wasn’t a job he particularly wanted to do when he started it, but he succeeded in it, and soon had a house and car, and all the trappings of a successful life in Spain.

But as life went on, Moya found himself increasingly unconvinced by the success he enjoyed. Was there more, he asked. He looked around him, to see what was missing.

By the time the next real estate crash came ten years later, he was ready to do something different. He did all sorts of sales and business training, but still he had the feeling that there was something more he wanted to find out about. As a result, over the years he became increasingly interested in personal development.

He read Change Your Life In 7 Days, a book by Paul McKenna – and it did exactly what it said on the cover. It made him hungry to learn more about personal development. It did indeed change his life.

Then, he met Paul McKenna on an NLP training course. On those courses, he saw the extraordinary changes that NLP and personal development could make in people’s lives. This experience fascinated him. Then came the next real estate crash in Spain, and Moya found himself suddenly needing to start again.

By sheer coincidence, at the same time McKenna was about to close his NLP training company in the UK, as he prepared to move to the US.

Along the way, there was much to learn, but Moya was determined to keep at it. He made miscalculations at times, but always with the sense of resilience he had learned as a younger man, he kept going, kept bouncing back, and kept on at what he wanted to do.

“Sometimes, we think we are going through difficulties,” he says, “but there are plenty of others whose lives are far more difficult. More so than mine, or yours. And it’s worth remembering that you can dig deep. You can do it, and the proof is those others who have come through much worse than any of us.”

He thinks of the poor refugees now, who are risking their lives to survive the journey to Europe from Syria, and finds their struggle, their desire to carry on whatever the cost, is not only an inspiration, but a reminder that you might think things are bad, but really they aren’t. They’re a reminder to, “Stop whingeing”, and even though you may think you’ve hit a black wall of your own, you haven’t. There are always options and always ways forward.”

So, how does he classify the things you need to be more resilient? He lists the skills of resilience in five clear steps:

The bottom line is you’ve got to focus. Really focus on what you want in life. What is it you want? Who do you want to be? What do you want your message to be? Focus on it. Don’t focus on 17 things because that’s not focusing. Just focus on one thing.

Remember, it’s not a problem, it’s a challenge – understand it. What’s stopping you? What’s not helping you? Where are you? Can you do anything about it? If it’s happened, understand it, and move on.

Don’t be afraid of change, it means you’re growing. That can be confusing, but the bottom line is that when things happen it does so for a reason. Change is the doorway to new opportunities.

You have to dig deep and find the resource inside yourself. Your challenge may not be easy. There will be times when you think you’re not going to be able to do it, but you will find the strengths within you.

All of these skills are part of what it takes to be resilient.  There’s one other skill that comes into play as well, and that is the art of reinvention. In building up The Best You, Bernardo has reformulated and remade the offer and the business.  At the same time, over the years, he has remade himself. From teenager to responsible adult, from real estate entrepreneur to timeshare seller.

From Spanish businessman to London-based personal development promoter, all the way Moya has applied the steps he mentioned, and moved on. And in every case the reinvention of himself and his products have moved on, too.

Over the years, Moya has interviewed many different leaders in their field, be they actors, artists, musicians, businesspeople, sportspeople, celebrities – the list goes on and on. And with each of them, in just about every case, it’s true to say that these core skills are central to their lives and their stories.

At The Best You Expo, Moya encouraged the audience to do the same. To ignore the voice that complains, to literally shrink challenges down and see them both in the context of each audience member’s life and also to set those challenges in the perspective of the wider world.

In this way, you will find the keys to surviving, expanding, growing and learning. These central skills are the core of resilience. With them you will be more than a survivor – you’ll be a success.