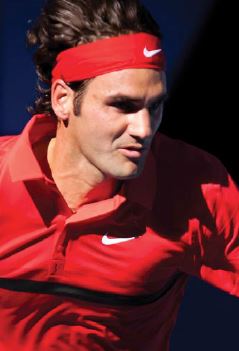 Roger Federer is a Swiss tennis player, and is currently ranked number two in the world, perhaps the best ever. He holds many records, but players are ultimately judged on how many grand Slam titles they have won.

Federer holds the current record with 17, and notably demonstrated his versatility and adaptability by winning on all three surfaces.

Federer is one of the highest paid athletes in the world, earning over $53 million in the year up to June 2012. His hallmark is unshakeable self-belief, and as a result he has won many matches from seemingly hopeless positions.

Federer believes that victory from hopeless circumstances is always possible, and possible is the power word. Federer does not always win from these positions, but seemingly has more than a fair share of luck.

In an interview with former player, and current presenter Sue Barker, he was asked how he reacted mentally when facing serve to avoid defeat. He replied that his priority was simple, to play the game the same as any other, and to avoid making any mistakes.

However, this strategy would not be enough on its own. He stressed that you also have to believe in miracles. Further, you have to make your miracle happen. He went further still, stating that it is not enough to hope for the best. You have to push luck on your side.

This is an extremely interesting comment, and one that other athletes have also expressed in their own different ways. The belief that luck is not random, that we do not live in a random universe, and that luck can be manipulated when the chips are down are relatively common themes.

I don’t know whether Federer has any knowledge of universal laws or not, but he demonstrates the essence of their teaching succinctly.

For example, the law of attraction proposes that our conscious and unconscious thoughts can infl uence external events, even at considerable distances. If even a fraction of this statement is to be believed then the implications are immense. Many grounded and pragmatic people who have never even heard of the law of attraction, let alone put it into practice, nevertheless also believe that some strange force is out there, working in their favour.

The words they use include luck, coincidence, synchronicity, serendipity, fate, and karma. They explain that a particular event was meant to be, or that things just fell into place.

Self-development guru Paul McKenna also believes we create our own luck, and studies successful people to identify their secrets. He writes, ‘Whether you choose to believe in the law of attraction or not, it’s interesting to note that many highly successful people do.’ These ideas are not original, and similar theories were p proposed by Napoleon Hill in his book Think and grow Rich. This book was published in 1937, and is still a best-seller, with over 60 million copies sold, so at least it worked for Hill.

Many of its readers were convinced it worked for them too. They believed that it was possible to stack the odds in their favour. They truly believed in their eventual success, as if creating a self-fulfi lling prophecy. This is the unshakeable self-belief that is such an important ingredient of Federer’s success too. Indeed all top athletes share such unshakeable self-belief.

They have created an intricately detailed representation of what they want, using all their fi ve senses. This visualisation is so convincing that part of their mind believes this success has been achieved already. you can do the same. The fastest path to success is to follow what works for others.

Not only does this include embracing their strategies, but equally importantly it involves binning the self-limiting beliefs that you and others have skilfully installed into your mind over the years.

The law of attraction has contributed to the success of many of its supporters, and can do the same for you too. Why not try it and see? I wish you good luck, and look forward to hearing your results!