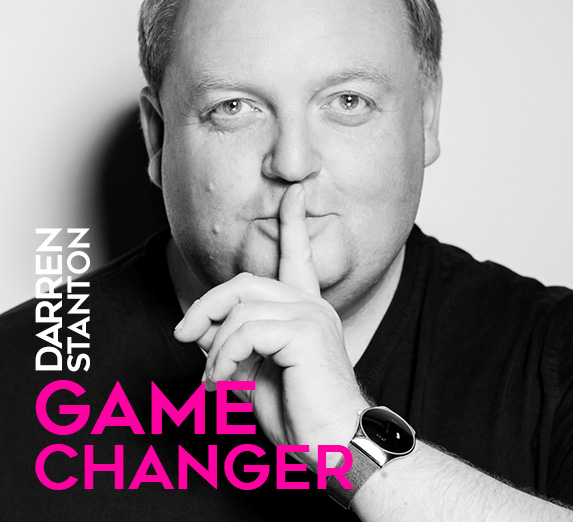 Human lie detector Darren Stanton is back with a new project that aims to get to the heart of what makes people successful, and how we can find our own inner potential

They say that a mind once stretched by new ideas will never again return to its original dimension. Like many of you reading this now, as far back as I can remember, I had always thought differently to other people. Growing up I felt I was the odd one out and no matter how hard I tried to like everyone else, the stronger the feelings got.

I began to take an interest in understanding the power of  the mind and of how it affects my success in the world. I studied psychology and later spent quite a few years as a police officer, while still continuing to grow and learn my craft.

I studied NLP, Hypnosis, EFT, and spent a number of years as a clinical and stage hypnotist, where I honed my skills as a clinician by day and my craft as a stage performer by night.

In 2009, I had a major life event where I lost my dad very suddenly. I was immensely close to him so it hit me very hard. It made me take stock of where I was in life in relation to my life’s goal and it was at this point that I decided to leave the police and focus on my goals full-time.

I began to write my thoughts, feelings and beliefs about working towards success, which was very cathartic for me. I never intended to write a book however these notes evolved in to what became a psychological success book called Project Jam Jar.

Following this success, I lost my mum suddenly and ironically it was at this point I had an opportunity in Los Angeles. Many people know me now from television work and appearances on BBC1’s The One Show and ITV1’s This Morning programmes as a body language expert, and my work in the media as a human lie detector assessing public figures. I feel immensely blessed that I am able to earn my living from my passion.

A large part of my work is on the public speaking circuit and my three key areas of expertise are:

In Interviews I am often asked how do you know if you are being lied to?

There are statistics that say in any ten minute conversation the average person will lie to us three times, even if they are innocuous white lies said to spare someone’s feelings. I think most people have fibbed about receiving a hideous gift and saying you ‘love it’ to the gift-giver.

People have a default baseline, which means that they have a normal state of breathing rate, voice pitch and eye contact. When I’m asked to assess someone, I look to establish their baseline as when people are accused of something with quite serious consequences attached, there will be significant changes in behaviour through the fear of being discovered. This is called deception apprehension.

Some of the high profile cases I have been engaged to work on include the 2010 and 2015 General Election where I assessed the body language and truthfulness of the party leaders during the live televised head-to-head debates.

I also worked for the national media on the 2011 News of the World phone scandal where I assessed the Murdochs during the Government select committees.

After working for 20 years in the personal development industry, I am currently in pre-production on a documentary called, The Game. The title of the film refers to the game of life in which we are all either willing or unwilling players.

The programme continues where The Secret left off. It’s an empowering, intimate cinematic experience that gears people for change.

The theories and ideas presented in  The Game approach from a different angle the truth of the secret.

Although some ten years on, there’s no doubt The Secret has changed people’s lives and opened up the theory on the Law of Attraction to many that otherwise would have taken an interest in personal change.

I hope the thought-provoking ideas presented in The Game can have a similar empowering effect.

The Game focuses on high achievers throughout history combined with honest short interviews with current visionaries that have used these methods and techniques, and gives answers to life, which we all play on  a daily basis.

By understanding the hardship and obstacles these people have faced, they present their learnings in the hope that viewers will short circuit the route to their own ultimate happiness in life.

So, after 20 years of hard work, I find myself at a point with renewed passion and enthusiasm for what I do. After all my research while writing The Game, I learned from the great achievers that if you are lucky enough you will discover what your passion is, what gets you excited when you think about it, what message you have for the world, what your life’s work is.

Once you discover that, it’s a case of releasing it even though you want success now! Whatever it is, it’s going to take time to develop your craft, skillset or business. Enjoy the journey not just focusing on the destination. The key thing I learnt is never ever let money be the motivator – yes, cash is important as it gives you freedom, choice and flexibility but by focusing your passion, money will be an invariable bi-product of your passion.

Although we have probably never met, I believe in you. Keep the faith and the passion for what you want and if you never listen to those who would seek to take you from your chosen path.

The Best You’s readers can view a short trailer of The Game at thegameiscoming.com and can get involved in the project.