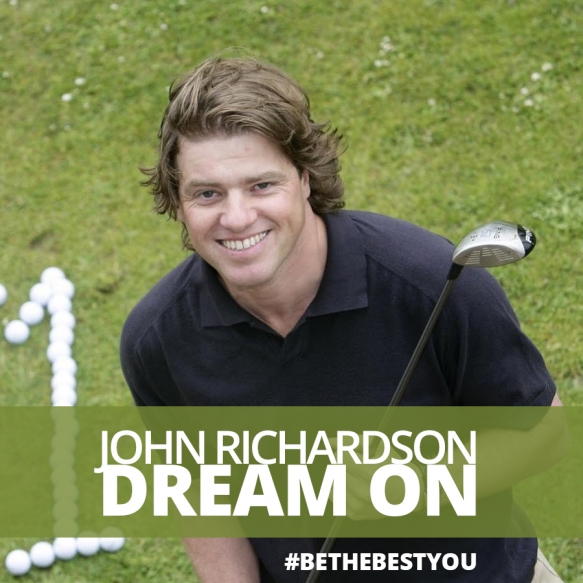 When John Richardson was a boy growing up in Northern Ireland, he watched with deep fascination as Seve Ballesteros won the Irish open.

“He was incredible at that stage,” he says, comparing him to his other sporting heroes, george Best, Mohammed ali and ayrton Senna.

“The pinnacle of sporting achievement.”

For a fleeting moment, John dreamed of becoming a pro, until real life got in the way. How could he know then that his dream would come back to him, years later? Life for John was mixed. growing up in Belfast during the height of the Troubles, he recalls how his earliest memory was being excited to go to see another lorry his dad had bought for his furniture business after the previous one had been burned out. He became used to the sound of bombs going off in the distance. Later, though, when his parents moved to the coast, life was “idyllic”.

To his parents’ frustration John didn’t really work at school, finally going on to sit a university degree in Business Studies after twice failing his a Levels. Life looked pretty ordinary.

The turning point came on his return from university when he set up a sandwich business at the age of 25. By the age of 28, it was the biggest sandwich business in Ireland. By the time he was 29, he had lost everything due to business mistakes. as John says, “that’s when the learning really started.” He went on to become an expert in the hospitality industry. “I thought about my businesses day and night,” he says, and he also “read business biographies to fill in the gaps” and learn from the experience of those who’d gone before him.

So what of the madcap idea of learning to play a round at par or below, within a year, with no real experience except for occasional golfing.

“As I got near to my 40s, I began to think about my dream when I was a child. I decided that I would realise my golf dream within a year. It meant applying myself obsessively, while continuing to work in business for 50 hours a week.”

What John had realised was that people were good at things not just from pure talent, but because they worked at something repeatedly. He reckoned he could become an expert in golf by putting in 20 hours a week. Professional golfers told him to “dream on” – which became the title of his best-selling book that told the story of how he did it. So how did he do it? He reveals that the first thing to do was get rid of negatives and have a set of mentors that he could rely on. They didn’t have to be real.

“When I was younger, I used to do a bit of motor racing. I used to imagine that ayrton Senna was sitting next to me. His imagined presence made my driving better.” John applied the same technique to his golf. If he was going to have a mentor, he was going to have the best, and so the virtual Seve Ballesteros accompanied him on his training. Through the power of visualisation, he imagined Seve was always there, or he would “slurp” himself into Seve’s body, and imagine looking out of his eyes. He would talk to himself in his head as if he were Seve, modelling the very best that he had seen.

“I got the concept from Napoleon Hill’s Think and grow Rich, in which he talks about having a mental mastermind, in which you can imagine having all these people giving you advice.”

What was extraordinary was that it paid off. Within a year, John got himself to a professional standard in which he could play a round at his local golf course on par. It was a real achievement.

John believes anyone can learn to do anything with the right application. The key to getting things done is taking personal responsibility and believing that you can do it. “It takes 1,000 hours of intensive training to get into the top 1 per cent of anything,” he says. “To do that, you have to believe and motivate yourself. Then you can do it. and once you have, doors open.”

His tenacity is also revealed in the story of his book’s publication, which was rejected 83 times before fi nally being accepted.

It has now sold 70,000 copies and those doors he talked about opened when a fi lm was made of the book. Success, he believes, is this straightforward: “If you can put 20 hours a week over a year into dedicated focussed hard work, you can really get into the top 1%. That’s the message, rather than people thinking I can’t do it, and coming up with reasons not to succeed.

The real message is, it doesn’t take much more than 1,000 hours to get really good at something. That’s what people should know.”