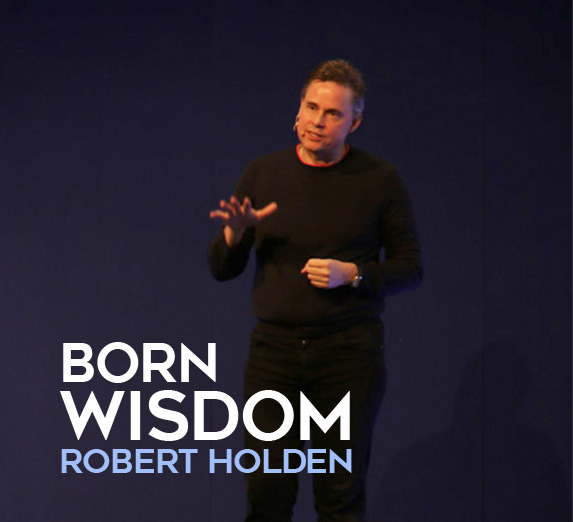 He’s the man who was famously ‘made up’ by personal development guru Louise Hay and went on to co-write a book with her, using Hay’s uplifting mantra, ‘life loves you’.

So when Robert Holden spoke to the Great Minds Seminar at The Best You Expo, the audience was expecting to be inspired, and they certainly weren’t disappointed.

“We arrive with a radiant intelligence,” explained Holden, “and we don’t think it goes away, but it does if we don’t use it. We start with an unconditioned self as we are not yet neurotic or cynical. It’s been described as ‘the original blessing’, and we are born with the intent to succeed, be wise and creative. Our job is to learn how to let it out.

“There is the tale of two selves. The learned self, or ego, and the original self, and during our lifetime we have to allow ourselves to be what we already are.”

At the session, Holden spoke about his first meeting with Hay in 2008. Backstage before Holden gave his presentation at Hay’s event, she asked if she might be allowed to do Holden’s make-up for stage.

Describing himself as “young and slightly nervous”, he agreed and as she finished applying the powder, Hay declared, “Life loves you”. It’s a phrase that has replayed throughout Holden’s career which has taken him around the world as he shares his work as a positive psychology coach and author. He has appeared on Oprah, CNN, BBC, Good Morning America and Fox News.

“The way we choose to see ourselves has a huge influence on what happens to us,” said Holden at The Best You Expo.

“It’s the mirror principle and there are five stages of our relationship with the mirror.  The initial stage comes during our first 18 months of life. Most children don’t recognise their reflection in a mirror, and they don’t think of themselves as a body instead identifying with our inner soul, what we feel inside.

“The second stage comes between two to three years, when the mirror becomes intriguing and is a friend, but later, around seven years, we start to become self-conscious and we have learned the habit of self-judgment. We stop really looking and start to evaluate and judge what we see.

“Yet later, stage four, we start to avoid mirrors as we become aware that we are judging ourselves, and yet this is finally followed by stage five, when we consider what it’s like to be us when we’re not judging ourselves. At this point we stop trying to be our best self and just be ourselves – there’s nothing more impressive than someone who dares to be themselves. In fact, I would ask what would you do more or less of if you were not critical of yourself?”

Holden urged the audience to embrace the concept of pursuing their happiness, but warned, “There is a world of difference between searching for happiness and following your joy. The result will enable you to experience your best self. When you are your happiest or most on purpose, life has meaning and value. To put it another way, the purpose of happiness is to ensure you are true to yourself. Follow your joy and you will be successful.”

Although Holden’s philosophy centres on happiness, he shared his own moments of depression, and that his mother had battled the illness too. “Most of us have ‘dark nights of the soul’,” he said. “In my book, Shift Happens, I make the point that these take us to our knees, yet they are really a moment of ego or self-image. Our soul is still intact and OK, and so we have to find a new beginning.

“Being the best you is about integrating failure, disappointment or wounds into life. We have to go through the death of our old self to find a new self. If we meet our fears or betrayals we can be ourselves again. We find our unconditional self again and it gives us the opportunity to find the open door.

“Some people go through life, other people grow their life – if you think something is missing in your life, it’s probably you.”

To find out more, visit  robertholden.org