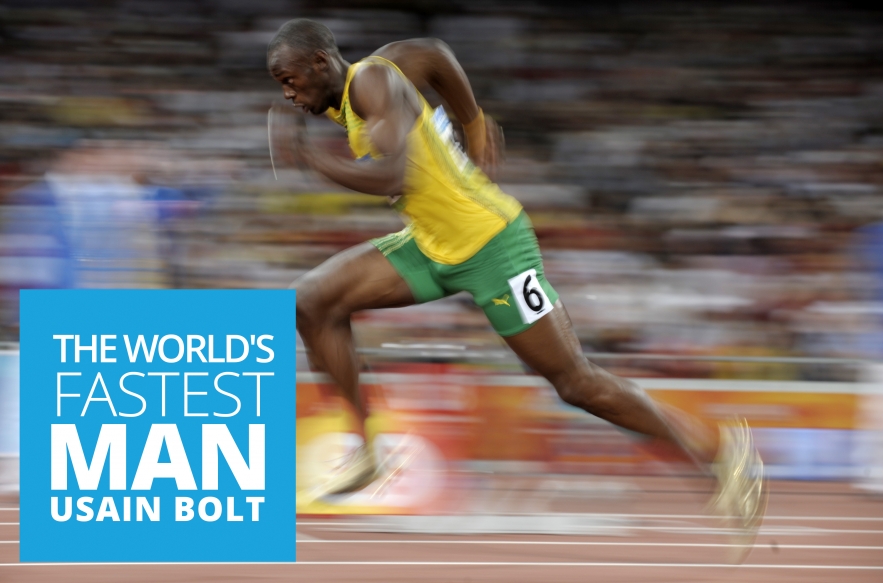 Jamaican runner Usain Bolt is the world’s most famous athlete. The 100 metre and 200 metre Sprint and 4 x 100 metre relay World Record Holder has massive popular appeal drawn from a huge “sport” and “non-sport” fan base. He’s also the highest paid athlete in history, with a net worth estimated at over $20 million. Dr Stephen Simpson uncovers what makes him a world beater.

The London 2012 olympics held some serious question marks for Bolt. Poor previous form, persistent rumours of injury, training setbacks and a controversial disqualifi cation for a false start in the heats of the 2011 World Championships left many wondering if he could still perform.

His starts had long worried him – until his coach’s assurances that his phenomenal late-race acceleration would trump his faster rivals’ starts.

Focussing on the positives paid off for Bolt in London, who set a new World record of 9.63 seconds in the 100 metres final. The audience were delighted with his broad smile, his relaxed chatter to the volunteer at the blocks, his play-acting to the cameras, his victory pose and his five push-ups celebrating his five gold medals. Post-race, he reiterated, ‘I won because I stopped worrying about my start.’

Like in 2008, Bolt was so far ahead he could slow down in his last few strides. This time he held his left finger to his mouth, a signal to silence his critics.

So what are the secrets of Bolt’s stellar performance? He says there are no secrets, but this is his secret. He keeps things simple and does not paralyse his mind with technical thoughts. He has no special diet, and eats and drinks whatever he likes. In the starting blocks he claims to think about which pizza to order after the race.

In a recent TV interview Bolt was asked for his five top tips for sprinters. He said:

1. Be fast out of the blocks

3. run tall at the end of the race

His interviewer politely pointed out that these were only three tips. Usain looked puzzled, then finally replied that he couldn’t think of any more. Why complicate it? In other interviews, he says he stays relaxed before a race, only focuses to a state of ‘tunnel vision’ when he is in the blocks.

Bolt sometimes lacks motivation for tough training, and counters this by repeated affirmations to himself, such as ‘I am the Best’. affirmations work at the unconscious level. His mind accepts that to be the best requires commitment to train harder than his closest rivals.

Other secrets, which are so obvious to him, would be worth applying to your sport, work, or personal life, too:

Pick the right coach who will explain what you need to know, not what you want to hear and who understands that peak performance demands the exquisite balance of physical, technical, mental and spiritual qualities. Bolt chose Mills because he knew his tough disciplined approach would counter his relaxed approach to life, bring out his best qualities and toughen him to compete against the world’s fi nest athletes.

Mills also stressed to Bolt not to fear injury. Though not welcome, injury demonstrated that Bolt was pushing himself to the limits.

Many athletes can’t handle defeat, but successful athletes turn it to their advantage as a learning opportunity. They compete without fear of failure, knowing that all possible consequences have positive benefits. no surprise, then, that the “no fear” mindset increases the chances of winning. Bolt himself says,

All athletes aim to treat all races the same, whether in practice or the olympic finals by maintaining the same routines, rather than special preparations for the most important events.

Bolt is also an entertainer. For him it is a great way to reduce stress. It is preferable to think of something pleasant, rather than the importance of the race.

Another secret is to train with a friend equally committed to winning as you, and who performs almost as well. This adds spice to practice and prevents complacency. yohan Blake performs this role for Bolt, and presumably Blake believes it helps his preparation too. long distance runner Mo Farah does the same with Galen Rupp.

Finally, never underestimate the power of laughter. Keep in mind that life is meant to be fun. If your job or sport is the equivalent of day jail, change it. Willpower alone won’t make you win. With more money than he will ever need, Bolt runs for fun. Setting new world records is almost incidental, a welcome by-product of doing what he likes doing – and doing it better than anyone else.