Zest for life by Bernardo Moya 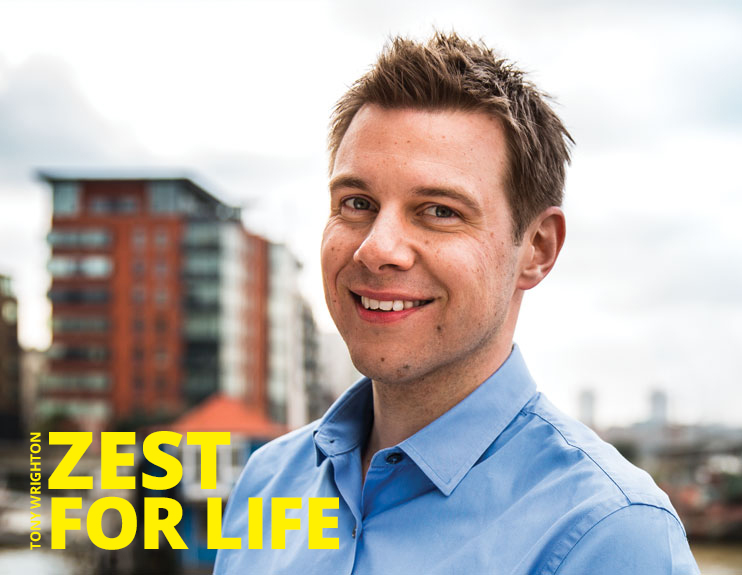 Sky Sports presenter Tony Wrighton has had a varied and fascinating career, also publishing hugely popular self-help books on communication, motivation and much more as well as starting zestology – a podcast pulling big audiences. Bernardo Moya finds out how NLP helped him draw massive radio audiences and accompanied him every step of the way to success

Tony Wrighton’s easy, quick-paced delivery is familiar to anyone who’s seen Sky TV. He credits his relaxed communication style to growing up surrounded by women, stage acting at university – and to the magic ingredient of neuro-linguistic programming (NLP).

Tony first encountered NLP in 2004 when he was working in radio.  “I went through a stage where I was very preoccupied, not quite getting depressed but definitely not as happy as I normally was,” he recalls. Being what he calls a “Type A personality”, he did some research, and booked onto an NLP practitioner course. He remembers the first time he encountered hypnosis during the training, in which he spent the weekend “floating”.

“That was just magnificent for me. I really loved it… I just felt so energised by what I’d been learning,” he recalls. Soon after finishing the NLP practitioner course he applied his newly acquired NLP skills to presenting drive-time radio in Manchester.

“I started to think, well, there’s a lot of language skills here and some of them can be quite persuasive.” Very soon he was getting amazing results, with his show getting more listeners than the prime-time breakfast show.

Next, he decided to write an NLP-inspired audiobook. Luck was on his side. He contacted Audible in London, which had just signed a deal with iTunes. Two weeks after his audiobook was published, it was featured on the British and American iTunes store.

“Straight away this NLP practitioner, with not that many skills, who’d written a short half-hour audio book on body language and recorded it in his radio station’s studio at night, without asking the boss, was selling quite a large volume of audiobooks straight away.  I couldn’t believe it.”

These days, Tony has published 12 titles which have been translated in 16 languages, and he’s had more than 300,000 downloads. Not bad for someone whose first book was written when he was still a fresh NLP practitioner.

Tony went on to qualify at NLP trainer level and continued to use his skills to help him. Like, when he went for his screen test at Sky. “I used a lot of NLP skills to get myself into the right frame of mind for that,” he says. “I did some hypnosis, I did some goal setting, I wrote out the date I would be the presenter on Sky Sports News – that came true almost to the date that I wrote down,” he grins.

His latest project was inspired by an illness he contracted whilst on holiday in a jungle retreat in the Philippines. A virus left him deeply fatigued and with numb patches. After months off work, desperate for a cure, Tony went to an Emotional Freedom Technique (EFT) practitioner. Through EFT Tony put the zest back in his life. He also found many others saying the same thing – they, too, were out of energy and wanted to find their mojo again.

That’s when Tony came up with the idea for zestology, a podcast in which he interviews top authors, sports psychologists, businessmen, sports men and women, nutritionists and many more.

Tony says zestology is about living life with more energy, vitality and purpose. So is there a handy tip he can give us now? “Two different aspects come up again and again,” he says. “The first is to make time for yourself. That might sound counter-intuitive if you’ve lost your job and you’re looking for a new one, or you want to change your life.”

Some of his guests are very specific about how that’s to be done, ensuring that they go to a yoga class at a certain point in the day, or they’ll just have chill-out time in between the frenetic rush of their lives. Indeed, Tony says, he makes room for himself by limiting the times he looks at his phone, so he’s not continually dealing with emails.

And the second aspect? “Being open to new experiences and going outside your comfort zone. That comes up again and again; being able to adapt and change.” He goes on to explain that with the media world continually evolving, if he hadn’t been able to leave himself open to new ideas, to adapt and change, he wouldn’t have been able to survive.  “I notice that, especially those in business who get to their 60s and 70s and are still really cracking it every time, they’re the ones who’ve managed to change and adapt, whether it’s their business or themselves, probably both.”

Tony Wrighton will speak at NLP Life Talks on 2 October – book your tickets at nlplifetraining.com/events/nlp-life-talks.