Wok stars by The Dumpling Sisters 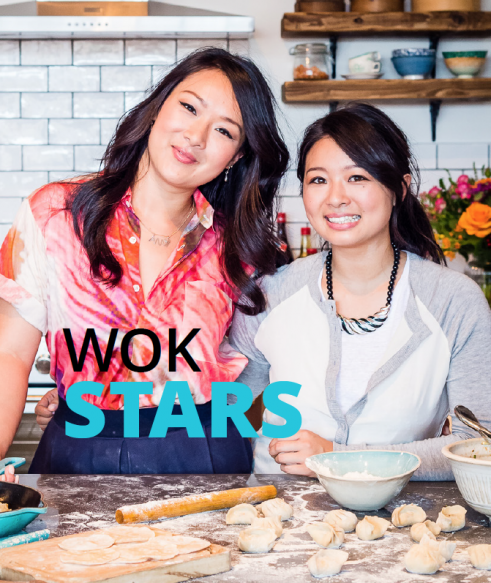 Lauded by Jamie Oliver, the Dumpling Sisters – Amy and Julie Zhang – are on a mission to make homemade Chinese food accessible.

It’s not unusual to love the food of our childhood, but for the Zhang sisters cooking and eating have been a unifying factor throughout their lives. The ‘Chiwis’ whose parents emigrated from Guangzhou to New Zealand when the girls were small, grew up helping out every Sunday on their family’s food cart which sold authentic Chinese food.

Although the sisters moved to the UK to study – Amy a PhD in chemistry at Cambridge University and Julie a Masters in criminology at Oxford – their memories and passion for good food inspired them to create their own YouTube channel in May 2013. With videos that debunked Asian ingredients and taught foodies how to make ‘real’ Chinese food at home, the Dumpling Sisters attracted a sizeable audience.

When Jamie Oliver’s YouTube channel threw down the culinary gauntlet to find the world’s best dish containing rice later that year, the sisters entered with iceberg parcels with fried rice, boozy Hoisin chicken and satay sauce. Although their dish came second – described by Oliver as “a delicious meal” – among 250 entrants, the Dumpling Sisters had already caught the attention of a growing fan base.

The next installment of the sisters’ story is a new cookbook, the eponymously titled The Dumpling Sisters Cookbook, with 100 recipes from the family’s kitchen.

“We grew up cooking alongside mum and dad on their tiny little food stand in New Zealand,” says Julie Zhang. “We came to the UK to study, and education is important to us, but after a few years apart we enjoyed spending time together cooking.

“Friends would ask us how we made things and so we started a blog and then videos on YouTube. We entered the Jamie Oliver competition and a book agent followed us on Twitter and suggested we do a book proposal.

“Over Christmas 13/New Year 14, we were supposed to be home but we had a really intense time meeting with our book agent and publishers who were so enthusiastic about our idea to create a family cookbook for Chinese food. It took a year to write, but the support from around the world has been overwhelming.

“It was our intention from the start to make it easy and accessible. We wanted to stay true to authentic Chinese cooking, and a lot of the dishes are simple to prepare and healthy to eat.”

With the pressure of writing a book with endless recipe testing, the strength of the family bond came to the fore. “As teenagers we didn’t always get along, but through the project we became so close – it was a real labour of love,” adds Julie Zhang. “You can have an argument but with family you always come back to each other.

“Our family is proud of us, and there are lots of recipes in the book that required plenty of Skype sessions home to get them absolutely right. Dad even did some videos for us to help us get some things right, so it’s a real family affair.”

Despite the sisters’ success, Amy and Julie still hold down jobs, juggling their new-found culinary stardom alongside. With invites to upcoming book fairs, their fan base looks set to grow, and the Dumpling Sisters are likely to become household names that are as popular as their divine potstickers.

The Dumpling Sisters Cookbook: Over 100 Favourite Recipes From A Chinese Family Kitchen  is published by Weidenfeld & Nicolson