Who dares wins – The adventurous life of Bear Grylls

Home Who dares wins – The adventurous life of Bear Grylls 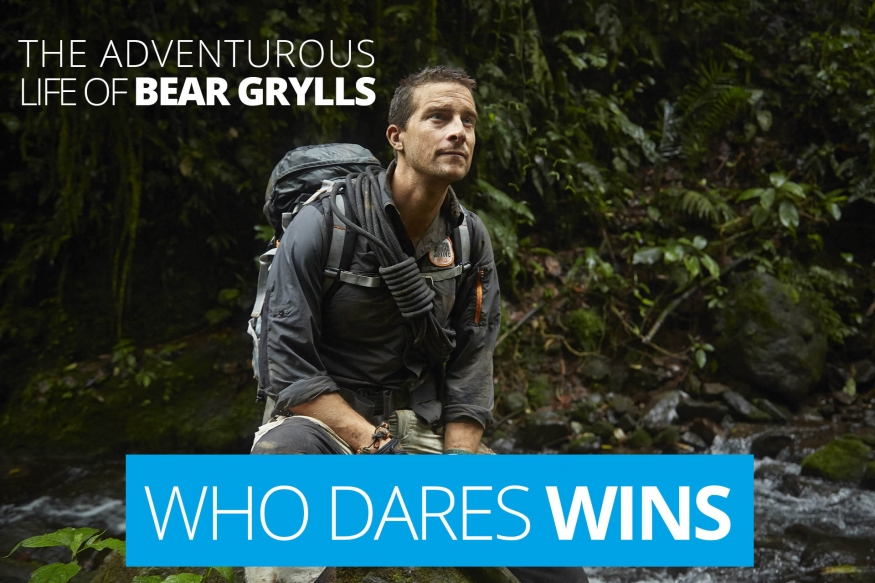 He’s an ex-SAS trooper, climbed Mount Everest after breaking his back, his shows have more than a billion viewers, he’s a heartthrob, a deeply committed Christian and family man. So how did Bear Grylls get to be… Bear Grylls?

First, that name. His real name is Edward Michael Grylls, but the nickname was awarded by his sister when he was one week old. The name implies wildness, unconventionality and danger. Which just about sums up the life of the Bear who spent his earliest years in the Northern Irish countryside, which he says, “was the place where I found my love of the sea and of the wild.”

His earliest memories, he says, are walks among bluebell woods and swimming in the cold sea. He was dragged away from the Irish wilds during term time to live in London. His father was an MP and, “above all, a good man: kind, gentle, fun, loyal and loved by many.” Nevertheless Bear found London life lonely. With his parents focused on work, he misbehaved at school, even running away from home. Things got so bad his mother would lock him in his room at night, but he escaped by using a bent coat hanger, describing it as, “my first foray into the world of adapting and improvising.”

To escape “smoky London”, the family bought a holiday cottage on the Isle of Wight where they spent their summers, eventually moving there full-time. It was where Bear really began to discover himself. The island was a benign environment where his family could give Bear free reign. He would head into the hills with his father, or gallop along a beach on horseback. “It was here I learnt to recognise that ‘tightening’ sensation, deep in the pit of my stomach, as being a great thing to follow in life. Some call it fear.”

He climbed hills with his dad, sometimes pretending to storm a German stronghold, throwing grenades at the German position. “In reality this meant lobbing clumps of manure towards a deserted bench on the cliff tops,” he remembers, before adding, “Brilliant.”

Those early years gave him room to express himself, be unconventional and revel in the physical, natural world. He and his father even talked about climbing Mount Everest and he remembers often returning home caked in mud. They were, “powerful, magical times”, during which he was proud to “push through” physical discomfort.

His early life contained a freedom many children have no idea is even possible. For example, he would take his small boat with a 1.5hp engine out to sea and meet his parents at the next bay as they walked around. He thrived on it.The risk also had its down side. A dare from a friend led to them both nearly drowning in mud when they tried to walk across a harbour. They managed to get out, but the RNLI was called and his parents were furious.

“It was a good lesson,” he says of the narrowly-averted disaster. “Know your limits, don’t embark on any adventures without a solid back-up plan, and don’t be egged on by others when your instincts tell you something is a bad idea.”Instinct is important for Bear. After becoming completely disoriented in fog during a skiing trip in Cyprus’s Troodos Mountain, he and his father walked on for hours in the dark.

Faced with either turning left or right, Bear’s “very strong intuition” was to go right, although his father preferred left. Within a few hundred metres of turning right they found a track to safety. The life lesson? “Listen to the quiet voice inside.” A benign voice guiding him has long been Bear’s belief. A committed Christian, he has quoted scripture to himself in his darkest moments. Part of his self-reliance is also to recognise there’s “something bigger than yourself” out there.

That faith was nearly lost when he went to boarding school, where he was surrounded by bullying.“Suddenly all I felt was fear. Fear forces you to look tough on the outside, but makes you weak on the inside. This was the opposite of all I had ever known as a kid growing up.” His response was to fight and misbehave. After being caught red-handed trying to break in to the deputy-headmaster’s house to steal his cigars, he received a final warning. When he was subsequently found French-kissing the daughter of the headmaster of another school, he was asked to leave.

He went on to Eton College where he took up karate to protect himself against bullies, eventually becoming so good that he trained with the Karate Union of Great Britain in Japan. He was unconventional and adventurous, climbing trees in the grounds and having night adventures throughout the grounds. He even climbed the school library dome, just like his predecessor the adventurer Ranulph Fiennes. A dizzying ascent with a 40-metre drop to concrete.

Later he was to say: “Small moments like that gave me an identity. I wasn’t just yet another schoolboy, I was fully alive, fully me, using my skills to the max. And in those moments I realised I simply loved adventure. ”He also started mountain climbing, something he loves. So, what is the appeal of the peaks? “Mountains are all about experiencing a shared bond that is hard to find in normal life. I love that fact that mountains make everyone’s clothes and hair go messy… that they demand that you give of yourself, that they make you fight and struggle. They also induce people to loosen up, to belly laugh at silly things, and to be able to sit and be content staring at a sunset or a log fire.”

Another trait central to his personality came out at university: his extraordinary resilience. Not everyone discontented with student life would enrol on an SAS training programme, but that’s what Bear did when he discovered the SAS Reserve was open to civilians.

The physical and mental endurance required to pass the course are famously punishing. So why did Bear put himself through the pain, the exhaustion and mental anguish? Why expose himself to life-endangering cold in the Welsh mountains and to extraordinary demands on body and mind? His answer is revealing.

“So much of my life had been privileged. I’d never really had to work that hard for anything. I had grown up with loving parents, with food on the table, warmth, and clothing in abundance. I wanted to work hard. I wanted to prove myself somehow worthy of the good things I had known.”

Bear admits to feeling devastated when he and his friend Trucker failed. Until another side took over. “Our achievements are generally limited by the beliefs we impose on ourselves,” he says. Calling on his faith and a saying by Winston Churchill that, “Success is the ability to go from one failure to another with no loss of enthusiasm,” he literally soldiered on.

He and Trucker re-enrolled, going through the entire training programme again. This time they passed. The two young men, in their early twenties at university, were at the same time fully-trained elite SAS operatives. Over the coming years, he recalls disappearing from university for a few weeks, then coming back heavily suntanned after going on a secret operation.

Here are the elements of Bear Grylls’s character: He is determined, adventurous, happy-go-lucky, funny, mischievous. He responds to fear and challenges by moving towards them. A man of faith, he also believes in luck. He is willing to endure and overcome, and to test himself to the extreme.

He is modest, playful and famously untidy. He’s a unique individual, but he’s not a loner. He loves his friends, believes in teamwork and respects people for who they are. He cares for others but goes after his goals with pure determination. These traits stood him in good stead when disaster struck. On holiday, his chute failed to open properly and he broke his back in three places. Though his spinal cord hadn’t been severed, he was a wreck. It took him nearly a year to walk normally again, and during that period he realised he couldn’t go back to the SAS. Lying in his hospital bed, he remembered climbing with his father and he set himself a new goal. To climb Everest. The dangers he faced, the times he nearly died, make an extraordinary story.

After he succeeded, he began to give motivational talks. After this he got his break on television and was propelled to international fame. Nowadays he is married, has two kids and owns an island off of Wales. His series, Man vs Wild, has a world audience of 1.2bn viewers. He is Chief Scout to the Scouting Association, a philanthropist and has his own clothing range. He says he did not seek fame or fortune. The money looks after itself while he lives his life honestly and authentically. His is an extraordinary life.