What does it take to be a policeman?

Home What does it take to be a policeman? 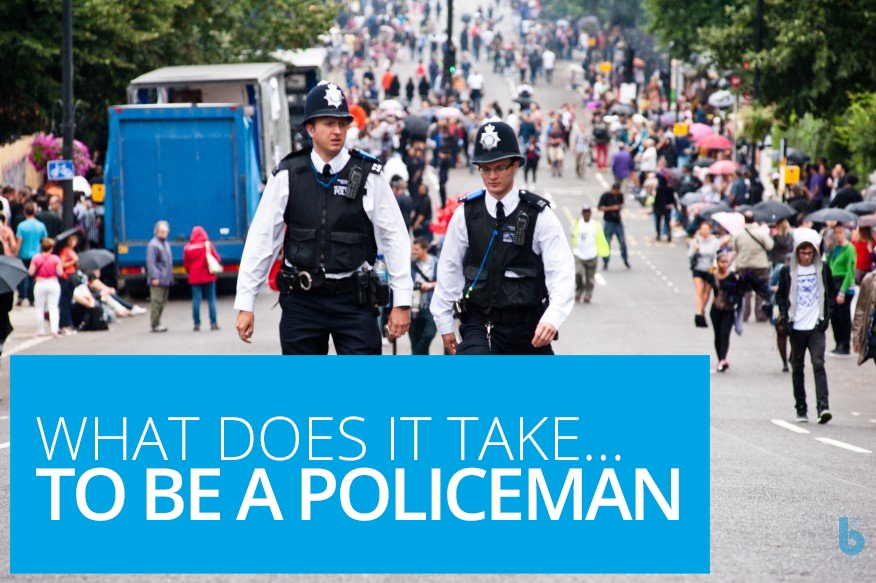 Part of being the best you can be is focusing on what it takes to get there. We’re continuing the “What does it take…?” column, which looks at this aspect of being the best. This month, we’re chatting with London City policeman A. Hoffman.

How do you become a policeman?

A written application is followed by an assessment day, which involves English, mathematics and logical reasoning tests. You are also assessed in a series of role-play scenarios where you have to demonstrate professionalism, communication skills and an ability to react to situations as they arise.

What is the best thing about being a policeman?

You get to meet people from all different walks of life. The job thrusts you into situations that challenge you to think on your feet. You get a healthy dose of adrenaline every now and then, and every once in a while you get to genuinely change somebody’s life for the better.

And the most challenging?

I had never been in a fight in my life before I joined the police. The first time somebody screamed in my face, I was trembling. But dealing with aggressive confrontation is a skill that you learn with practice like any other. You have to learn de-escalation skills, tactical communication and, when necessary, you have to be willing and able to step in and apply force. That was a big challenge for me. Some of the more extreme sights and experiences that we have to deal with can also be tough. You have to learn to cope with things in a healthy way and not carry them with you.

I work in the core “response” role of policing. I carry a workload of around 15 active criminal investigations which I am responsible for dealing with from the point of first attendance and dealing with the victim, gathering evidence, building a case, arresting the suspect and interviewing them to securing a prosecution and giving evidence at trial. And if you call 999, we’re the ones that turn up, so I’ll often be doing paperwork when suddenly I have to run out the door and jump in the car to attend a burglary, pub fight, or a domestic abuse incident.

Is this something you see yourself doing for the rest of your life?

Absolutely. I’m in love with the job and I couldn’t imagine doing anything else. I crave new experiences and new challenges. The job certainly provides those. I’ve grown so much and achieved things I never could have imagined myself doing before I became a copper. There are frustrations that come with the job of course, but it gives me a deep sense of satisfaction when I know that I’ve gone above and beyond and really helped somebody.

What made you want to become a policeman?

I had never thought of being a policeman in my life. I was a highly intelligent student, but I went through a rebellious phase in my mid-teens and completely underachieved in all of my GCSE and A-level exams. I ended up in a series of dead-end office jobs, which did not challenge or excite me in any way. A colleague left the office to join the police and told me all of the exciting stories about what he’d been doing. I decided to apply and worked very hard to get in. It’s the best decision I ever made and I’ve never been happier.

Which assets are most useful in a career in policing?

There are a lot of cop shows on TV at the moment. Of course they exaggerate things for dramatic effect, but is there a show that gets it even a little bit right?

I’ve never seen a drama series that is even remotely realistic. I’ve yet to slide over the hood of a car during a foot chase. And we don’t have a “partner” to avenge when a mafia boss murders them the day before their retirement.

There are a whole lot of police reality programs. I never watched them before, but now I’ll catch an episode every now and then and laugh knowingly at the situations and types of people that come up.

My dad. He is truly a larger than life character. I learned my sense of humour and my skill at telling anecdotes from him. He’s hedonistic and has a childlike joy about him. He has a strong moral code and would do anything for the people he loves. He’s taught me so much and had a huge influence on the man I’ve become. We’re good friends and drinking buddies. I love him.

A young woman was in an extremely violent relationship with her boyfriend. There was a real risk that she would be killed if she stayed with him, but she refused to provide a statement to police. She felt trapped and completely without options. I spent an entire day with her and built up a rapport until she felt confident enough to give evidence against him. When my shift was over we were only halfway done, so I stayed for another six hours, unpaid, and got the job done. He ended up going to prison for several years and she moved abroad, quit her drug habit, and enrolled in college. She emailed me two years later to tell me how much her life had changed and thanking me for the role I had played in that.

When did you last see the sunrise?

I work night shifts, so I’m often still at work when the sun comes up. But I haven’t taken the time to sit and watch one for a long time.

How do you relax?

I drink and party with my friends, go rock-climbing or throw myself around the flat to silly music.

What do you want to be remembered for?

Being a decent, fun and funny person who always spoke his mind and was always true to himself.