Weird But True: The Secret to Dealing With Those Things Called “Feelings” by Therese Schwenkler

Home Weird But True: The Secret to Dealing With Those Things Called “Feelings” by Therese Schwenkler 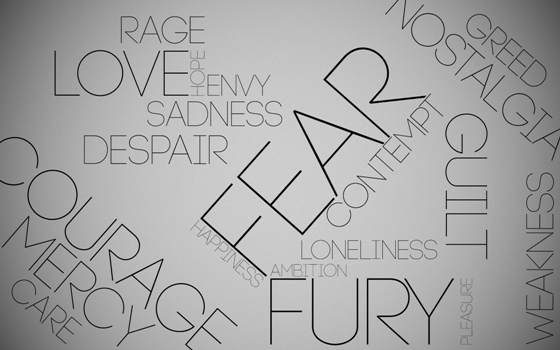 Apparently, we’ve all got these things called “feelings” or whatever. (Well, except for my ex. HA JUST KIDDING!)

You can’t see them, and who the hell knows what they really are, but they’re there anyways.

Now in my past life, I thought I knew how to handle these so-called “feelings.” Without a thought, I’d just stuff my face with some Ben & Jerry’s. Or go out and get hammered and call up an ex. Or, you know, go on a completely unnecessary shopping spree. THAT SHIT ALWAYS WORKS!

That is, until I’d wake up the next day and realize that not only was I hungover and feeling like a fatso, but I also just wasted, like, an entire weekend of my life. And also, $236. And I’ve got nothing to show for it except… well, emptiness of the soul.

I GUESS IT DIDN’T WORK SO WELL AFTER ALL.

Feelings. I spent at least 22 years running from them– distracting myself with food and mindless television, with guys and with shopping and with booze, before I discovered the secret of all secrets, the BIG FAT THING that had been hidden in plain sight my entire life.

THE SECRET OF ALL SECRETS

In 2006, I sat in the back of a classroom at Gonzaga University, expecting to hear another lecture full of regurgitated textbook information.

Instead, I discovered the secret of life.

I could write for three lifetimes and still not be able to explain what I learned from Dr. Kent Hoffman that semester, but I’ll try for  something simpler. Suffice to say, these ideas come from both attachment theory and object relations theory– made more user friendly and accessible by years of whittling complexity into the simplest possible form.

Today I’ll explain them within the context of a parent-child scenario from John Gottman’s book, Raising an Emotionally Intelligent Child.

A parent-child scenario? You may be asking.

Yep. Sure, we’re talking about understanding our own emotion coping strategies, but we can’t possibly come to understand ourselves in isolation. As infants, we learn to regulate our emotions based on the strategies we experienced in relationship with our caregivers.

Thus, I present to you “The Checked Zebra Incident”:

[My daughter Moriah] was two at the time and we were on a cross-country flight home after visiting with relatives. Bored, tired, and cranky, Moriah asked me for Zebra, her favourite stuffed animal and comfort object. Unfortunately, we had absentmindedly packed the well-worn critter in a suitcase that was checked at the baggage counter.

“I’m sorry, honey, but we can’t get Zebra right now. He’s in the big suitcase in another part of the plane,” I explained.

“I want Zebra,” she whined pitifully.

“I know, sweetheart. But Zebra isn’t here. He’s in the baggage compartment underneath the plane and Daddy can’t get him until we get off the plane. I’m sorry.”

“I want Zebra! I want Zebra!” she moaned again. Then she started to cry, twisting in her safety seat and reaching futilely toward a bag on the floor where she’d seen me go for snacks.

“I know you want Zebra,” I said, feeling my blood pressure rise.

“But he’s not in that bag. He’s not here and I can’t do anything about it.”

Take a moment to imagine this scenario and ask yourself the following questions:

Within the context of “The Checked Zebra Incident,” here are the three ways that most of us learn to deal with those weird things called “feelings.”

The “distraction response” is everywhere in our society. It’s easy! Just pretend your feelings don’t exist! When the child becomes upset about Zebra, the parent’s response might be something like this:

“Look at that airplane out the window!”

It’s quite simple, really: if you don’t know how to deal with your feelings, just distract yourself from them. Dismiss them and push them away. Put on your big boy pants and plaster a smile on your face, regardless of how you feel inside. Your feelings don’t exist and aren’t valid.

As an adult, the child who grew up with the distraction response will come to under rely on others and over rely on himself, downplaying the significance of (or presence of) emotions.

The “emergency response” occurs when a caregiver doesn’t know how to deal with the child’s feelings, so she freaks out. She rushes in to fix them immediately. Anxiety. Fear. PANIC.

“OMG SHE’S GONNA CRY, BERNARD!” And the mother rushes in and reacts out of panic.

“I’ll get you another stuffed animal right now, sweetie! STOP THE AIRPLANE!!! IT’S THE END OF THE WORLD OMG FEELINGS!! Here honey, have some ICE CREAM!! DO YOU FEEL BETTER NOW OMG OMG OMG!”

Anything, everything, quick quick quick, FIX THE PROBLEM MAKE HER HAPPY– ANYTHING TO STOP THE FEELINGS!!!

This child will likely feel the same sense of anxiety and overwhelm as an adult. She’ll be easily overwhelmed by emotion, swallowed up in it, preoccupied by it.

She’ll do anything and everything within her control to FIX these feelings (even if the fix isn’t ultimately in her best interest), for FIXING is the answer and she cannot rest until the emotions subside and resolution occurs. She’ll come to over rely on others for fixing and/or will want others to over rely on her. She’ll have trouble dealing with things on her own.

The Resonant Response: “It’s OK, little one– I’m here with you.”

By now, I was getting “do something” looks from the passengers, from the airline attendants, from my wife, seated across the aisle. I looked at Moriah’s face, red with anger, and imagined how frustrated she must feel. After all, wasn’t I the guy who could whip up a peanut butter sandwich on demand? Make huge purple dinosaurs appear with the flip of a TV switch? Why was I withholding her favourite toy from her? Didn’t I understand how much she wanted it?

I felt bad. Then it dawned on me: I couldn’t get Zebra, but I could offer the next best thing—a father’s comfort.

“You wish you had Zebra now,” I said to her.

“And you’re angry because we can’t get him for you.”

“You wish you had Zebra right now,” I repeated, as she stared at me, looking rather curious, almost surprised.

“You’re tired now, and smelling Zebra and cuddling with him would feel real good. I wish we had Zebra here so you could hold him. Even better, I wish we could get out of these seats and find a big, soft bed full of all your animals and pillows where we could just lie down.”

“We can’t get Zebra because he’s in another part of the airplane,” I said “That makes you feel frustrated.”

“I’m sorry,” I said, watching the tension leave from her face. She rested her head against the back of her safety seat. She continued to complain softly a few more times, but she was growing calmer. Within a few minutes, she was asleep.

Although Moriah was just two years old, she clearly knew what she wanted—her Zebra. Once she began to realize that getting it wasn’t possible, she wasn’t interested in my excuses, arguments, or my diversions. My validation, however, was another matter. Finding out that I understood how she felt seemed to make her feel better.

Keep in mind that this involves more than offering simple words; it’s a mirroring of the child’s feeling state– a “being with,” an emotional “holding.”

Dr. Hoffman explained it simply– based on years of scientific research and studies, it all boils down to simple explanations that he quoted on our class slides:

“You get what I’m feeling and I know it.”

“Having someone here with me in this bad feeling allows me a way out of feeling bad.”

“Please let me know you get what I’m feeling and that you will wait here with me until things change.”

I am not alone in this feeling after all.

There is someone here with me– someone bigger, stronger, wiser and kind, to help me make sense of this feeling, to stay here with me until the feeling resides.

Not if it resides, but when.

I realized halfway through class– this is what I’ve been missing all along.

We don’t need to be talked out of our feelings, to distract ourselves from them.

We don’t need to squelch our feelings with immediate fixing.

The absence of sadness– that’s not truly what we’re after.

All we need is something so much simpler: resonance. We need to know that we are not alone in our pain, that someone actually gets us. The experience of being experienced. The feeling of being known.

Simple holding, deep resonance– a staying with, a being with, a deep safety, a deep trust, that perhaps we’ve never known before.

I want to know  if you can sit with pain,  mine or your own,  without moving to hide it  or fade it  or fix it.

And I came to realize that maybe, just maybe, with the help of some larger grace, I could offer this gift to myself

A favorite author of mine, Pema Chodron, paints a picture of “a mother bird who protects and cares for her young until they are strong enough to fly away”:

People sometimes ask, “Who am I in this image — the mother or the chick?” The answer is we’re both: both the loving mother and those ugly little chicks. We are a poignant mixture of something that isn’t all that beautiful and yet is dearly loved. Whether this is our attitude toward ourselves or toward others, it is the key to learning how to love. We stay with ourselves and with others when we’re screaming for food and have no feathers and also when we are more grown up and more appealing by worldly standards.

I opened myself up to a larger grace, and I began to learn that maybe I could be both the mother and the chick. Maybe I could hold this pain– compassionately, tenderly, lovingly.  I could make space for it. I could let it be. Instead of repressing or indulging, I could simply sit with this pain and hold it with compassion.

And so day in and day out, this has become my practice, the work of my life.

By staying right here in the midst of my feelings, by offering no solution, I find the solution. By avoiding escape, I find freedom. I’m finding my way out by finally finding my way in.