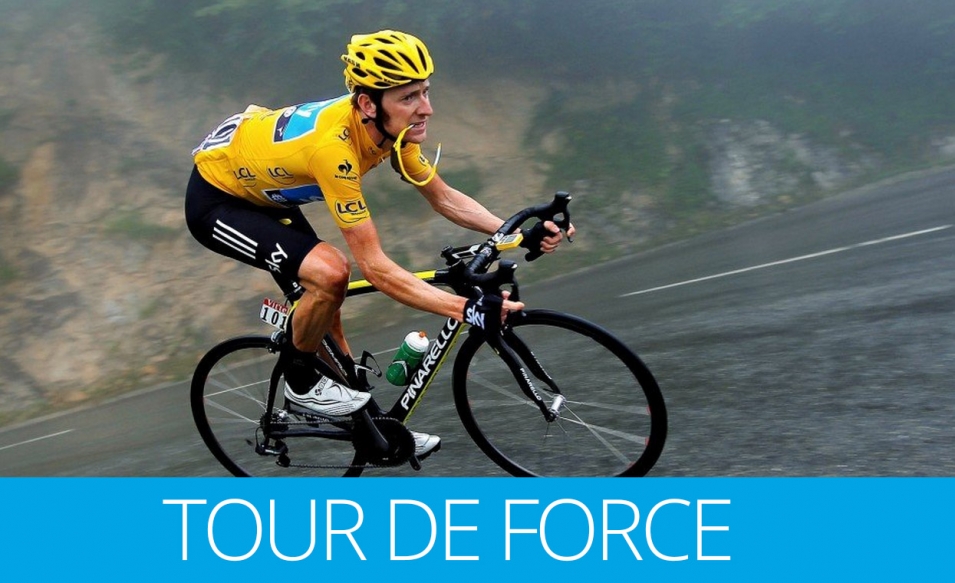 Famously focused, outspoken, confident to the point of cocky yet respectful, kind and even shy, he is a powerful role model. The Best You celebrates the achievements of cycling genius, Bradley Wiggins

With his gnarly carves, lean figure and famed sideburns, he looks like the typical hero from an earlier age of cycling history. Yet Bradley Wiggins is very much a modern day hero, his story that of the ‘boy made good’.

Wiggins didn’t have the greatest start. Born in 1980, he was an ordinary kid living with his mum, Linda, in Dibden House, Paddington. They were a one-parent family after his dad ran out when Bradley was just 18 months old. He wasn’t particularly interested in academia and had the usual interests of a kid growing up in London in the 80s, predominantly football. But Bradley had a sporting heritage that hinted at the heights he would achieve in later life.

His absentee father, Garry Wiggins became a professional cyclist in 1976, helping to win the Australian Team Pursuit title for Victoria. In Europe during the 1980s, Garry went for broke, performing well in the 1983/4 World Pursuit championship, but as his son comments, falling “just short of greatness”. Interestingly, Garry was nicknamed ‘Doc’ by other racers because he used and supplied amphetamines to them – something for which Bradley has no patience whatsoever. Not that Bradley was aware of this at the time. His father never contacted him and his mother rarely mentioned him.

The father figure in his life was provided by his grandfather, George, and his life was “surprisingly devoid of angst” despite the break-up. Then, one day in 1992, his mum called him indoors to watch a cycle race between Chris Boardman and Jens Lehmann at the Barcelona Olympics.

As soon as Bradley saw cycle racing he was hooked. He went to the local Hayes track – actually a piece of unfinished dual carriageway – and started training on an ordinary bike. He threw himself into his new interest obsessively, helped and guided by club members who admired his enthusiasm.

Then Bradley was struck with a piece of luck. Or more accurately, he was struck by a car while he was cycling on the open road. The insurance payout his mother assiduously pursued enabled this working class boy to spend £1,000 on a proper race bike. His generous side came out in payment of a further £700 to his mum for her hard work.

He never looked back. By 1994 he was racing and winning regularly as he learned his craft, and in 1997 won three medals at the national junior championships. The British selectors spotted him and his international career started. By 1998, he was Junior World Champion in the Individual Pursuit, which he won in Cuba. It was exactly as he’d dreamed.

Wiggins is a motivated self-starter. Part of his inner myth is the notion that he “did it entirely on his own”, without anyone else’s help. This shows how deeply he is self-focused and highly competitive, but it only tells part of the story.

His mum did the right thing to call him to watch that race between Boardman and Lehmann, perhaps guessing it would ignite his interest. Linda and step-dad, Brendan, spent long hours taking him up and down the country to various races in his teens, and he had informal coaches early on at the clubs he trained at, who would advise and help him. But Wiggins’ performance on the track, the hours of training, fitness and hardships he underwent were all down to himself. He was and is deeply self-motivated and part of the story that he is the archetypal hero making his way alone in the world is undoubtedly true.

However, a lone young rider in the big world of international cycle racing was always going to need support.

As well as having funding from the National Lottery he has also had the guidance of the British Olympic Association. The latter, through Chris Boardman, helped him overcome confidence issues when competing with Australian Brad McGree. Boardman is the man who should be credited with bringing the fiery youth’s brilliance under strong discipline. Boardman was a hard taskmaster, keeping Wiggins’s nose to the grindstone, and asking to see his training plans for the coming year in meticulous detail.  When he received his first spreadsheet from Wiggins, he tore into it. He would keep minutes of their discussions and then pull Wiggins up on any variation from what they’d agreed. This approach worked well, and in 2004, Wiggins finally beat McGee to take gold at the 2004 Athens Olympics. It was an extraordinary moment for a young man of 24 – to be the number one Individual Pursuit cyclist in the world, but it was also very nearly his undoing.  After the highs of that win, Wiggins went on to what was essentially a nine month bender. He drank everyday, sometimes for days at a time. Perhaps like his father, Wiggins also has the ability to drink like a fish. After Athens, he reports how he crashed and burned, losing all self-control and spending nine months drinking.

When his wife, Cath, gave birth their son, Ben, Wiggins had the “jolt to the system” he needed, and stopped drinking. He went on to rebuild himself – with her and Boardman’s support, and with guidance from the British Olympic Association’s psychiatrist Steve Peters. Along the way, Wiggins has had much to deal with. In the 2007 Tour de France, his team was excluded because a member’s drug test proved positive.

A staunch anti-drugs critic, he loudly denounced drugs cheating to the press in the strongest terms. He coped with a brief rapprochement with his father, rejected him and then had news of his death. In every case he has come through, stronger and wiser. Wiggins went on to become an unstoppable force in world cycling. At the Beijing Olympics in 2008, he brought home two gold medals in Team Pursuit and Individual Pursuit.

He aimed to bring back three, including the Madison, but was boxed out when the Spanish and Argentinian teams worked together to block him.

This is evidenced by his extraordinary performance in the London 2012 Olympics in which he took three gold medals, in the same year that he won the Tour de France – the first British cyclist to do so for decades. His performance puts him up there with the greats of world sport. In total, Wiggins is a man who has extraordinary talent shaped by experienced hands. This combination – of sheer brilliance, a degree of utter self belief, of knowing his mind and going for what he wants alongside the firm hand of those wanting to keep him on track are the keys to his success.