Top 6 vegetarians by The Best You

Home Top 6 vegetarians by The Best You 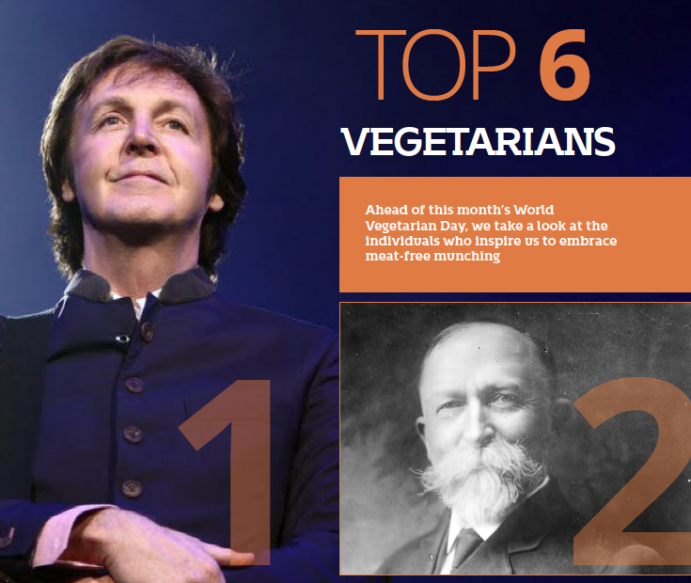 With this month’s World Vegetarian Day, we take a look at the individuals who inspire us to embrace meat-free munching

Macca tops our list for his well-stated views on vegetarianism, having converted – along with his first wife, Linda – in the mid-70s. He’s spoken about the moment when the couple sat eating a roast dinner and looked out of the window to see lambs running around a field: “The penny dropped. The light bulb lit up. We thought, we might just give this up.” With his famous offspring also ardent campaigners for meat-free Mondays (and the rest of the week), the McCartneys are our vegetarian heroes.

The US doctor and health food pioneer was definitely ahead of his time and gave us far more than the staple cereal the world tucks into each morning. Despite some eccentric beliefs, Kellogg felt meat did our digestive systems no favours, saying: “Meat, on the average, requires two or three times as long for digestion as do fruits and farinaceous foodstuffs such as apples, rice… Boiled rice digests in one hour; roast pork requires five and a half hours.”

There are so many ways that we are inspired by Gandhi, but he was also influential in the evolution of the vegetarian movement in London. He wrote a book, The Moral Basis of Vegetarianism, and believed that vegetarianism was integral to becoming a pure, non-violent individual, later describing vivisection as, “the blackest of all the blackest crimes”. Gandhi travelled with his own goat, so he could always have fresh milk, and followed a fruitarian diet for five years, although later returning to vegetarianism after developing pleurisy.

Forget the bloodthirsty roles that he played on screen, Peter Cushing was a patron of the Vegetarian Society from 1987 until his death, describing ‘wholemeal toast with butter and Olde English Marmalade, served with a pot of Typhoo tea with milk and sugar’ as his favourite recipe. Despite being steeped in blood and gore for most of his working life, Cushing also had a passion for bird watching and painting water colours.

The former US President arrived at the White House with what has been described as a ‘legendary appetite’, with a love of hamburgers, steak, chicken enchiladas and doughnuts. Yes, four years after leaving office, he underwent a quadruple bypass, later commenting, “I essentially concluded that I had played Russian roulette” with his diet. Now vegan, Clinton has transformed his diet and lost 20lbs with clean eating.

The new Labour Party leader has been a vegetarian since the age of 20, after a period working on a pig farm. A long-time campaigner on animal rights, earlier this year he called for a ban on the importation of foie gras into the UK.