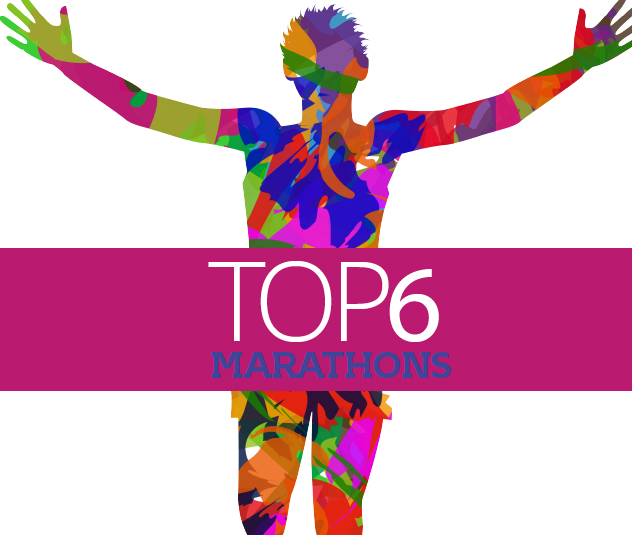 First held on 29 March 1981, the 35th London Marathon was conceived in The Dysart Arms, Richmond by keen amateur runners, John Disley and Chris Brasher. Inspired by the New York City Marathon, the pair set about creating the first event which was run by 6,255 finishers. Now a major sporting event shown in almost 200 countries, a record 37,227 completed the 2012 race.

Held on Patriots’ Day, the third Monday in April, the Boston Marathon was inspired by the revival of the marathon at the 1896 Summer Olympics in Athens, and was founded in 1897. It is regarded by runners as one of the ‘Big Six’, along with London, Tokyo, Berlin, Chicago and New York City. In 1996, the Centennial Boston Marathon established a record as the world’s largest with 38,708 entrants, and 35,868 finishers.

With the exception of 2012, when Hurricane Sandy blew into town, the New York City Marathon has been run since 1970. Originally centred around Central Park, in 1976 the race was extended to take in all five of the city’s boroughs and it is now the world’s largest marathon. Participation is mainly controlled by a lottery system organised by the marathon’s original organisers, the New York Road Runners.

The first Paris Marathon – also known as the Tour de Paris Marathon – took place in 1896. It was won by an Englishman, Len Hurst, who crossed the finish line in 2 hours, 31 minutes and 30 seconds, winning 200 francs in the process. Participants run from the Champs-Elysees towards Place de la Concorde, finishing in Foch Avenue.

Reported to be one of the world’s most difficult marathon races to run, the course starts in the town of Marathon and heads uphill from 10-31km, creating an arduous experience for even the most experienced runner. Devised as a joint venture between the Greek Tourist Board and Athletics Association in 1972, the race attracts more than 30,000 competitors.

A relative new kid on the marathon block at just 15 years, the Reggae Marathon is possibly the most enjoyable to experience. Participants run alongside the idyllic Caribbean sea, around the North Coast of this beautiful island. The race starts just after 5am, before the sun roars into life. We reckon this is the way to do it if you’re planning to tick a marathon off your bucket list