Top 6 Festivals with a difference by The Best You

Home Top 6 Festivals with a difference by The Best You 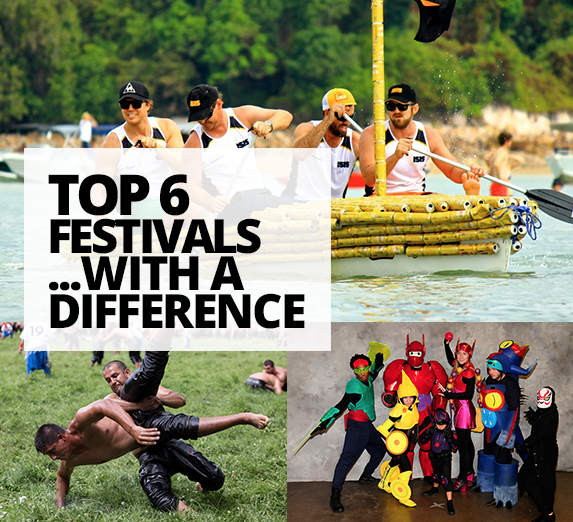 Now here’s a festival with a difference. Launched down under in 1974, entrants to the Darwin Beer Can Regatta handcraft boats out of recycled beer cans before taking to the water to test their tin tubs’ buoyancy and stability. The locals call it ‘can-struction’ and we say cheers for being bonza!

Believed to be the world’s oldest annual sporting event, the origins of this curious festival date back to the 14th century when an Ottoman raider and local man wrestled to death. Their bodies were buried beneath a fig tree and a crystal clear water source sprang up. Today a festival has sprung up with many participating wrestlers apprentices of those who have fought before them, and regarded as heroes in local culture.

Having moved way beyond its geeky image, Comic-Con is now an enormous event packed with celebrity appearances, film screenings and out-of-this-world costume competitions. With 600 separate events taking place within the convention, across four locations, it’s the perfect place to discover your super-hero!

If you enjoyed the movie, The Wickerman Festival is one for you and comes complete with a giant man-beast effigy that’s as impressive as it is eerie. DubbedScotland’s Alternative Music Festival, the event makes use of a natural amphitheatre on Galloway’s grazing land and has a cult following. The festival ends with the burning of a 13-metre Wickerman at midnight, a stunning scene that harks back to pagan times.

Dating back 150 years when, during the Great Irish Famine, there was a mass emigration from the area’s farms and families would pay large dowries to matchmakers to lure a wife for their son. Today, the local horse dealer, farmer, publican and third-generation matchmaker, Willie Daly, leads proceedings over a month of pairing, accompanied by gypsies reading crystal balls, tea leaves and palms, Irish jigs and plenty of native oysters to munch.