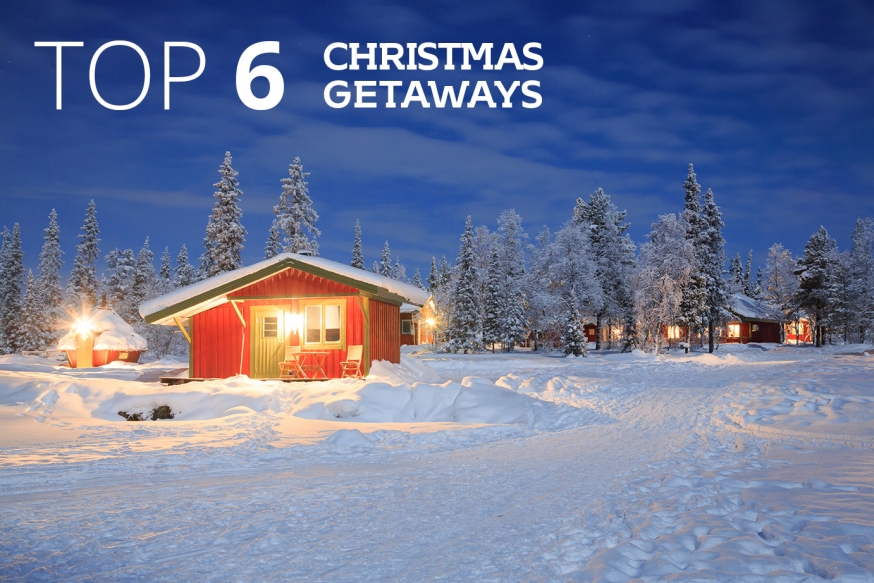 If you live in a big city, you might want to get away for the holidays. Trying to negotiate your way down London’s Oxford Street or New York City’s Fifth Avenue in the days leading up to Christmas can be exhausting. We’ve put together a list of our top six Christmas escapes.

The 16th- and 17th-century houses that are decked out with twinkling lights, which reflect and sparkle in the winding canals make Amsterdam a joyous place to be during the festive season. In addition to this, the spirit of Santa Claus is strong in Dutch culture, making this Christmas vacation one to remember.

Don’t miss: Many ice rinks pop up around the Dutch capital at this time of the year, which makes a fun change from the usual bicycles the locals usually get around on. Take part in the local tradition and strap on a pair of skates.

Reindeer pulling sleighs are not only the stuff of Christmas songs and stories – in this part of the world they are a complete reality. Probably the closest you can get to Santa’s home in the North Pole without actually being tasked with delivering presents to the whole world on Christmas Eve.

Don’t miss: If being close to Santa’s home isn’t enough for you, make the trip to the Santa Claus Village in Rovaniemi. Or, if that’s not for you, how about a stay in a real igloo? They are made from thermal glass, so you don’t have to worry about being cold.

Winter in the Bavarian capital means a hundred-foot-tall Christmas tree in the Marienplatz, about two dozen Christmas markets (weekdays draw fewer crowds), and mulled wine and gingerbread, served on a tram that crosses the old city. Looking for the Christmas spirit? Look no further than Munich.

Don’t miss: Nothing quite says Christmas joy like the sounds of the holidays. From 25 November to Christmas Eve, there is live holiday music on the Town Hall balcony from 5:30pm. Get into the spirit and enjoy some Christmas tunes.

Up until now, this list has been pretty Eurocentric, so we thought it would be fair to dedicate three choices to traditional, snowy European Christmases and three to Christmases in warmer climes. Nashville is great for a country Christmas, thick with honky-tonk entertainment and family values.

Don’t miss: The food. This part of the USA is known for dishing up some of the yummiest soul cuisine, from beef tenderloin to butterscotch bites. And of course you can’t go to Nashville without going to a beer hall line dance.

In the Western world, a lot of us have replaced the traditional meaning of Christmas, which is celebrating the birth of Christ, with indulgent food and gift giving. If you don’t celebrate Christmas for the Christ aspect, then why not celebrate somewhere warm and not traditionally Christmassy? Bali is a great option for this.

Don’t miss: Tours of the Hindu temples, the sunrises and sunsets, and a Christmas dinner with a difference. Fresh seafood is plentiful in this part of the world, so be sure to take advantage of it while you are there.

Portuguese influences in seaside India, whitewashed Catholic churches, firecrackers, bells, and carollers will make your holiday perfect as a scene from a Bollywood film. There is so much more to Goa than the beaches for which it is famed, so try to cram in as many activities as possible.

Don’t miss: The festivals and the dancing that goes along with them. Goa is known for its dance festivals and for the heightened state of awareness that revellers reach while doing meditative dance. Join in the fun. You might see some things.