Too fat to run? – Julie Creffield 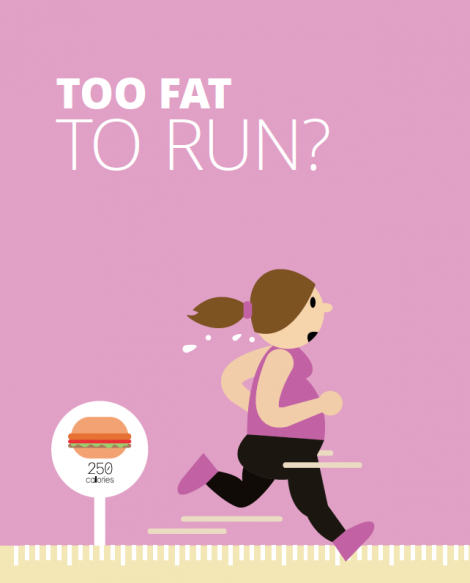 No, really, you’re not. That’s the unwavering belief of Julie Creffield who is on a mission to get more women physically active

Boot camps, too aggressive. Triathlons, too competitive. For anyone who’s ever contemplated trying to get fit after too many years on the couch, the entry point to exercise, and specifically running, can seem inadmissible. It’s the issue that Julie Creffield, the creator of toofattorun.co.uk and author of The Fat Girls’ Guide To Running, is tackling. It’s also a scenario that she experienced herself when she took the decision to transform herself from self-confessed 20-stone, beer-guzzling, cheesecake-eating couch potato to marathon runner and plus-size role model.

“It is, absolutely, a decision that each of us has to make individually,” says Creffield. “I have been overweight for most of my adult life, but you get to the point when you think, ‘I can either accept it or do something about it’.

“I am a big believer in doing it quickly too. Lots of plans say it takes 12 weeks to achieve a level of fitness, but if I did that I would die of boredom – my #5weeksto5k programme means that in just five weeks you see results. It requires commitment, with three sessions a week, but in five weeks it also becomes a habit and you’re then hooked, whereas changes are harder to make over the longer term.”

Creffield is currently working with a group of women on ITV’s This Morning. She believes that, in particular, they are inhibited from physical activity by a number of factors. “Women feel embarrassed or guilty about taking time out to exercise. They worry about looking silly or falling over, and the fear is crippling.

“One of the ladies on the show says her girls make fun of her, and she’s even received abusive comments from people in her community who say she’s making a fool of herself. There’s a total lack of support, and that’s a common experience.

“There’s also the issue of what to wear. Sportswear is so unforgiving and doesn’t go up to bigger sizes, so we end up wearing men’s fitness wear that’s uncomfortable and we’re tugging at it while we’re trying to exercise. It’s another barrier, and we need to find more progressive sportswear companies to tackle the issue.”

Creffield also says we lack a wealth of sporting role models to inspire women, and to encourage the belief that we can achieve reasonable levels of fitness, without being at the extreme levels of sport.

“Running is one of the first things we do as children,” she says. “I have a two-year-old and when she runs I see that she experiences pure joy. We must remember some of that and get back to childish movements. We start to doubt our bodies after a while but we need to realise that we can do something.  A lot of the obstacles to running are in our head, not our bodies.

“At school, unless we are fast, teachers aren’t interested in us – you’re picked or you’re not, and it reinforces a feeling that, unless I am good, it’s not worth trying. It’s hard to rock up and have a go, but it doesn’t have to be impossible.”

Creffield’s next mission is to develop #OneBigFatRun, a global virtual 5k on the last Sunday of every month, like parkrun but aimed specifically at women.

“So far we’ve had 3,000 women take part in runs around the country. Whether you run or walk, the idea is to get people to commit via social media and then post their success shot afterwards. We’re looking for a sponsor and we want #OneBigFatRun to be completely inclusive, and for women to bring their kids, family and social circle to run 5k. I want everyone to tell their neighbour and for #OneBigFatRun to grow until everyone’s running.”