The Spiritualism of Conan Doyle by Matt Wingett

Home The Spiritualism of Conan Doyle by Matt Wingett 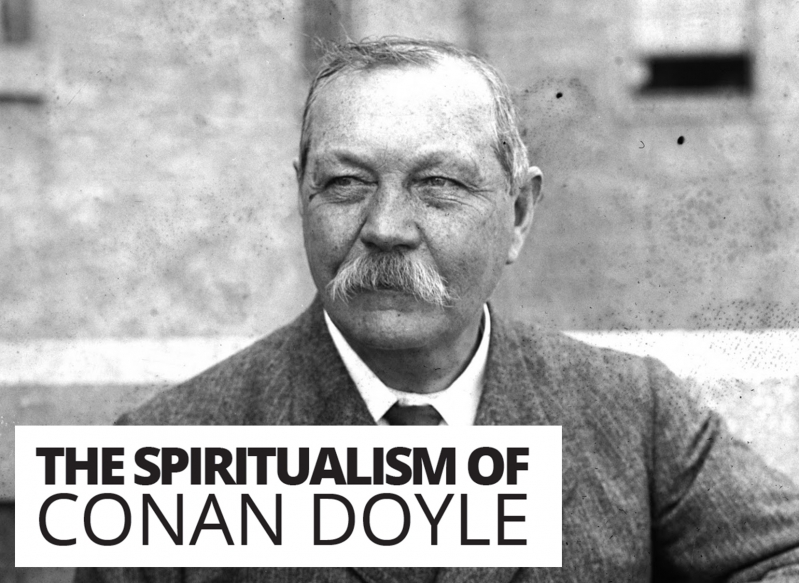 As he prepares to crowdfund a new book on the Spiritualist beliefs of Sir Arthur Conan Doyle, author Matt Wingett discusses the inner life of the man who created Sherlock Holmes, and uncovers what led him to believe in ghosts, telepathy – and even fairies

“How often have I said to you that when you have eliminated the impossible, whatever remains, however improbable, must be the truth?”

It’s the archetypal statement of Conan Doyle’s great rationalist creation, Sherlock Holmes, but many people are surprised to hear that Conan Doyle dedicated the last ten years of his life to Spiritualist missionary work. All the while, he continued to write Sherlock Holmes stories.

For me, this striking fact was a puzzle, and I set out to solve it in a new book, Conan Doyle and the Mysterious World of Light to be published in March 2016.

Conan Doyle’s earliest experiments in the paranormal came when he was a young, living in the southern English seaside resort of Southsea. Here, he met a local architect, Henry Ball, with whom he performed numerous telepathy experiments. Doyle became convinced he could communicate his thoughts without words to Ball, but drew no Spiritualist message from the results. Instead, he theorised a “secretion of thought” emanated from one brain and detected by the sensitive brain of another – in many ways like the wireless transmission invented in the following decade.

At first, Doyle was very much a materialist. A medical man, trained in the scientific method, he was convinced, as he put it, that when the “candle went out, that was an end of the matter.” When he attended his first séance, he was less than impressed:

“It seemed to me that we were collectively pushing the table and that our own wills were concerned in bringing down the leg at the right moment,” he later wrote.

His turning point came when he met Mr Horstead, a medium who seemed able to draw facts from his innermost soul. Crucially, Conan Doyle was not thinking about the facts Mr Horstead read in him, so it couldn’t have been simple thought transmission. The writer pronounced: “I can only say that if I had had to devise a test message I could not have hit upon one which was so absolutely inexplicable on any hypothesis except that held by Spiritualists.”

During Doyle’s early years in Southsea, he made his first public announcement of his conversion to Spiritualism in Light, a journal of the occult, mystical and paranormal. Doyle maintained his relationship with Light up to his death – and it was through the articles and letters he wrote for Light that I realised I could track his Spiritualist beliefs over many decades.

Every important Spiritualist event of his life is reported within it – very often in his own words. After years of Spiritualist dormancy, in 1916, Doyle went public again. Many have suggested that the Great War, or the death of his son Kingsley in 1918 as a result of injuries sustained in action caused Doyle’s conversion – but Doyle was deeply fascinated and convinced by Spiritualism long before.

As a scientific man, he was not alone. Alfred Russel Wallace, the close friend of Charles Darwin, who independently devised a theory of evolution and prompted Darwin to write On The Origin of Species was a Spiritualist. So was Sir William Crookes, who laid down the foundations of nuclear physics. Marie Curie investigated Spiritualism, reasoning that if tables could lift off the ground of their own volition, a new energy source must be responsible.

Conan Doyle, however, took his belief to a new level. Spiritualist ideas provided him with fascinating horror story material, including tales of reanimated Egyptian mummies, astral projection, psychometry, evil hypnosis and hauntings. They also provided the spiritual ingredient he needed. Though he was raised a Roman Catholic, he was put off Christianity by the Jesuit priests at Stonyhurst College where he studied as a boy. Spiritualism filled that emotional need and opened doorways to, literally, whole new worlds to explore.

In 1920, Sir Arthur Conan Doyle left the UK to perform missionary work in Australia and New Zealand, convinced that Spiritualism was a New Revelation sent by God after the unprecedented scale of deaths in the Great War.

He spread that message throughout the world.

Conan Doyle and the Mysterious World of Light tells that story in detail, in Conan Doyle’s own words as they appeared in Light. Many of the articles in it have never before been republished, and the book gives a fresh insight into the mind of this creative genius, who became the world leader of the new religion of Spiritualism.

To pre-order your copy of Conan Doyle and the Mysterious World of Light, and help Matt Wingett get it into the shops, support his crowdfunding venture here https://www.indiegogo.com/projects/conan-doyle-and-the-mysterious-world-of-light/.