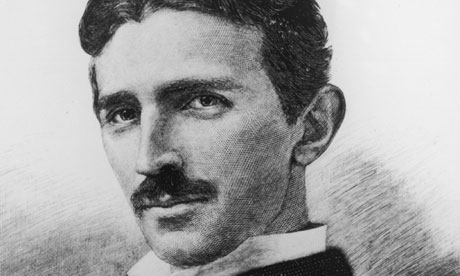 Born in Croatia in 1856 to an illiterate mother and a priest, Nikola Tesla was no doubt a genius. At college he showed how he could perform integral calculus in his head, prompting his teachers to accuse him of cheating.
During his first year at University he worked from 3am to 11pm every day, but later became addicted to gambling, losing all his allowance before winning it back and returning the bal- ance to his family.

He failed to graduate and worked as a drafts- man. During this time he had a nervous breakdown.

Then, in 1884 he sailed for the US, arriving with only four cents in his pocket. Here, he was hired by Thomas Edison at his Edison Machine Works, where he was asked to solve some of the company’s most difficult problems, including redesigning Edison’s direct current generators. After arguing with Edison, Tesla set up his own company and devised an alternating current electrical system. He went on to invent the Tesla coil, wireless electrical transmission, laid down the foundations of radar, made early studies of X-rays and in 1898 demonstrated a radio-controlled boat. His inventions were so advanced that they were used at the cutting edge of technology.

When Marconi made his famous first ever transatlantic radio transmission in 1901, Tesla quipped that it was done with 17 Tesla patents. Tesla’s work on electricity and radio at the beginning of the 20th Century were the foundation of many things we now take for granted. As such, there is no doubt he was an extraordinary, world-changing figure.

Nikola Tesla is often cited as the misunderstood genius of the 19th and 20th centuries. He overcame hardship to allow his brilliance to shine through, and many of the things we now take for granted were first conceived in his brilliant mind.
Bernardo Moya

Our virtues and our failings are inseparable, like force and matter. When they separate, man is no more