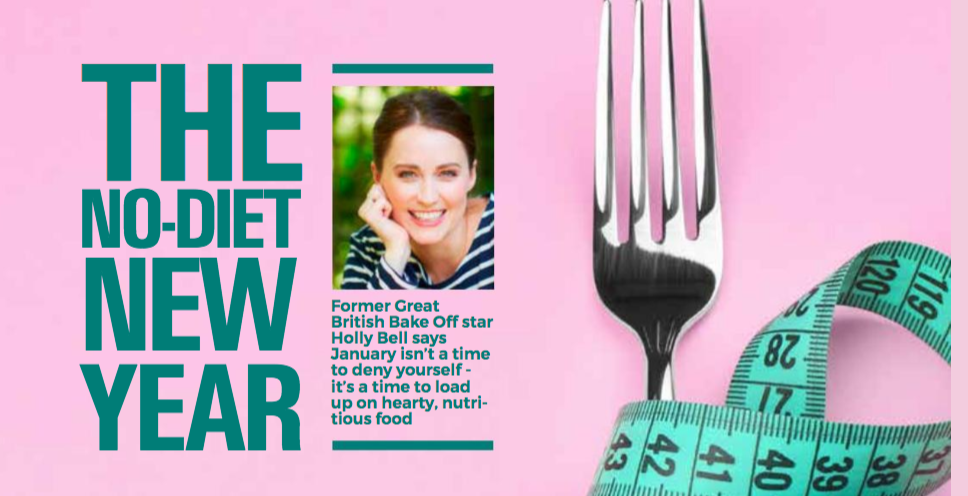 Former Great British Bake Off star Holly Bell says January isn’t a time to deny yourself – it’s a time to load up on hearty, nutritious food

Here we go again. It’s January and the house is finally free of tinsel and pine needles. There’s a vague memory of a never ending turkey and ill-advised triple Irish coffees before bedtime. In short, I’ve only gone and overdone it again. My jeans are tight, the waistband dangerously close to sawing me in half.

But this is not the time of year for salads and abstinence. It’s cold outside, it’s grey and gloomy. I’ve nothing against lettuce and cucumber but they’re not winter fodder. No, the only way to ensure that waistband stops tugging is to up the veggie intake and down the sugar intake. Think of it as a cleansing month of healthy eating rather than a diet. The D word should be banned in fact. As soon as you forbid something, the cravings begin.

Mornings are so much harder when it’s chilly, so a little treat of a morning is in order. Adding a spoonful of cocoa to my porridge makes breakfast feel like a treat whilst filling me up with slow release energy. Plus there are few things more joyful than starting the day with a chocolate hit. Actually add some orange zest too and I think I’ve reached nirvana. (Fruit faces are optional if over five).

And for dinner? I turn to spices to add extra warmth and depth. My cauliflower and sweet potato curry is virtuous yet tasty. Now, a word on cooking in January. Do yourself a favour and invest in a Pressure King Pro. It’s a digital pressure cooker that makes short work of soup, porridge, stews, fish, jams, chutneys – even whole chickens are poached in just 25 minutes. In January, when patience is short, bust out the labour saving devices.

Pressure cooker method: Stir together the oats, milk, water and butter in the pressure cooker inner bowl. Close the lid and ensure the value is closed. Set to the ‘porridge’ setting. Once ready, cover your hands with an oven glove and carefully release the steam. Open the pressure cooker lid and stir through the cocoa powder, add honey or maple syrup