The music man by Justin Stoneman 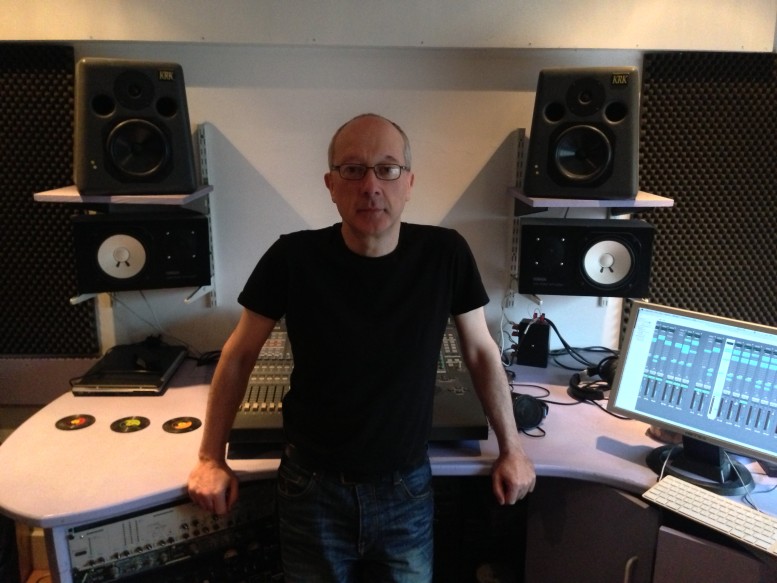 From the cutting edge of science to making music for pop stars – Justin Stoneman joins John Robinson in his studio to discover an extraordinary tale of risk-taking, dream-chasing and success

How does a maths genius break into the entertainment world? “It’s simple really,” John Robinson says. “Music is maths, so get the sums right and the listener is happy.” The producer’s North London complex, home to his Clique Productions entertainment company, is a 24-hour hive of activity. Artists from every musical genre flock for the attention of the man known affectionately as the ‘vocal doctor’. His sanctuary provides creative space for acts from across the globe.

“Music is a conveyor belt and the best writers shape patterns, they are older, they learn their skills over many years,” he reveals. “Writing modern pop music is inherently mathematically – and producing it is a science.”

From modern production secrets to a revelation on Simon Cowell’s recent huge industry miscalculation,
Robinson has insights into what makes an elite talent in the creative industry. “The overlap between science and music has always been my obsession so I decided to stretch and examine that relationship,” he tells us. “I have not been disappointed.”

Those at the very top of their field know that true
dominance demands a multi-disciplined approach. The world’s top football managers are master psychologists. The finest lawyers are tacticians. Internet gurus combine a technical prowess with creative flair.

The marriage of numbers and music has long been
established. Musical greats from Stravinsky to James Taylor have noted how their finest compositions were shaped by numbers. As far back as 338 B.C. classical
mathematicians such as Plato were observing the link. Robinson is now putting a clever modern twist on how numbers can make us dance. Plato would shake his butt in approval.

Robinson’s typical working day starts at 7am and finishes sometime after midnight. “I love it,” he says. “I don’t
regard doing what I love as work. I nip home, grab a couple of hours sleep, then wake up excited to return to my mixing day for another day of surreal magic.”

With his reputation on the rise – BBC Radio One’s
cameras are vacating the studio as I arrive – interviews are something the softly-spoken gent is getting used to – it is a timely point to spotlight Robinson’s highly unusual path to success.

“Science was my first love, but music was in my blood,” he recalls. “I remember always reaching up to play the piano as a kid. My parents eventually paid for an
expensive music teacher, but she was incredibly boring,

so I left. I was mortified that I’d wasted my parents’ money, yet I still yearned to play. Anytime they would leave the house I’d secretly run to the piano and

play for hours. It fascinated me. As a kid, I always played in secret shame.”

His early achievements were dominated with science and maths. “I did my honours degree in physics and
electronics, became a systems design engineer, and
I soon got involved in a few rather interesting things.” Robinson’s humility is camouflage. In truth, his brilliance led him to being head hunted for a whole host of high-level projects, from designing countermeasures against underwater mines to maintaining elite computer systems.

“I signed the Official Secrets Act,” he says. “I can’t talk in detail about certain things but I enjoyed diverse projects. If I knew then that I’d end up making my living from
creating drum and bass beats at 4am I’d probably be gobsmacked. Life has a funny way of throwing us curve balls that we can’t anticipate.”

To his credit, Robinson has very much chosen to throw the balls himself. Just over ten years ago, at an age when most enjoy slipstream into the finest parts of their
careers, Robinson followed his heart. “I just decided to leap into a different world,” he says. “I have always loved and lived music so it felt like a natural and life-affirming decision to take.

“I had worked in a music shop when I was younger, fixing the electronics on instruments, so I knew I had the skills required to put together a studio. The overlap between science and music has always been a personal obsession, so I decided to stretch and examine that relationship. Thankfully, I have not been disappointed.”

While the music stars we read about in the media seem to be cool kids with
effortless creative talent, the truth is that the analytical minds of Robinson are those who really create most of the modern music we listen to.

“The biggest hit songwriters and producers are not names most people recognise,” he explains. “The largest
industry cheques are rarely cashed by the prettiest faces. Music is a conveyor belt and the best writers shape the
patterns. They are older and have learned their skills over many years. They don’t get chased down the street by photographers and that is exactly the way they like it. Writing modern pop music is inherently mathematical and producing it is a science.”

I’m eager to discover Robinson’s views on what reality television has done to the music industry. He has worked with various artists from BBC’s The Voice, ITV’s X Factor and Britain’s Got Talent, alongside upcoming stars from BBC Introducing.

“These shows produce packages and market them,” he says. “Simon Cowell is clever and uses strategies and spreadsheets to make decisions. He rolls the dice. I was intrigued by his masterplan to have an eight-piece boyband on the latest series. It was no surprise when Stereo Kicks fell before the final.” I’m intrigued – why not just add some extra faces to attract more fans? Science could tell us it would not work.

What did Robinson know that the rest of us did not? “Well, firstly, our short-term recall is set at seven items max, closer to five on average,” he explains, “George Miller and others have proved that. It is no coincidence that boybands have always been carefully pruned up to a limit of five members.

“Secondly, you cannot really hear more than seven things at once – so both psychology and science dictate that Cowell got it wrong that time. Too many voices. It’s a rare miss, maybe he needs to turn the radio down and listen to what the numbers are telling him.” It’s knowledge that means that Robinson will be leading the music chart’s stars, long after the current crop of household names are long gone.

THE SCIENCE OF SOUND

Intrigued why some tunes are earworms while others fade from memory almost as soon as you hear them? Here’s John Robinson’s scientific explanation of music.

Years of research produced the MP3 compression technique that best reduces information without affecting its perceived quality, but I know where the shortcuts were made. When a loud percussive sound reaches the ear, a strange ‘memory loss’ moment occurs.

The mind ignores the last few milliseconds of sound just before the hit. In MP3 encoding, this small section of audio is removed as it’s not perceived by the listener, they just hear the ‘bang!’ So, I simply try to avoid placing any important lyric or musical hook line immediately before a loud percussive sound.

If a vocalist is struggling, brain knowledge is useful. I play a note on the piano then tell them to listen to it as it fades and to raise their hand when they can no longer hear it.

Then I ask them to repeat the process, but this time rather than raise their hand they should sing the first note that comes naturally. On every occasion, the singer is able to sing the correct note.

The science? As the note fades to silence, the singer’s brain tries to maintain its level. The stimulus from the nerves in the ear are effectively amplified by the act of listening to keep the note at the same loudness in their mind. Just before the point where the singer has lost the connection with the sound totally and it has died to silence, it has been almost completely reproduced and replaced by the version in their brain.
In the process of creating this note the vocal chords involuntarily move and tense ready to reproduce the sound.

The auditory processing part of the brain quickly calculates the time
difference from ear to ear – the result gives us immediate knowledge of where the sound originated from. The invention of ‘stereo’ sent an instrument sound to either the left or right speaker, but it is really just faking the true spatial location effect. For a truer feeling, I split the sound in two, feed half of it to one speaker directly, then also add a very short delay to the other side. I use this effect in a mix when I want to make an instrument grab attention. The sound will appear to be moving with you in a space just behind the speakers as you walk around the room.

Producers’ ears become less sensitive to higher frequency sounds. Tired ears add too much brightness to mixes and can sound shrill. Noise is the cure I use. Described by its colour – white is startling, pink is warmer – ‘noise’ contains all the frequencies of sound, randomly mixed together. Sound is turned into electrical impulses by the nerves linking to the audio pathway to the brain.
It is spread evenly across all the nerves which respond to different frequencies  allowing them all to stimulate the brain by a similar amount. I use noise to act like a reset button to my ears, the effect lasts about three hours for my ears, but your mileage may vary. Now you know the science, think about what’s happening the next time you hear your favourite tune.