The Midas Touch: an interview with Jacqueline Gold

Home The Midas Touch: an interview with Jacqueline Gold 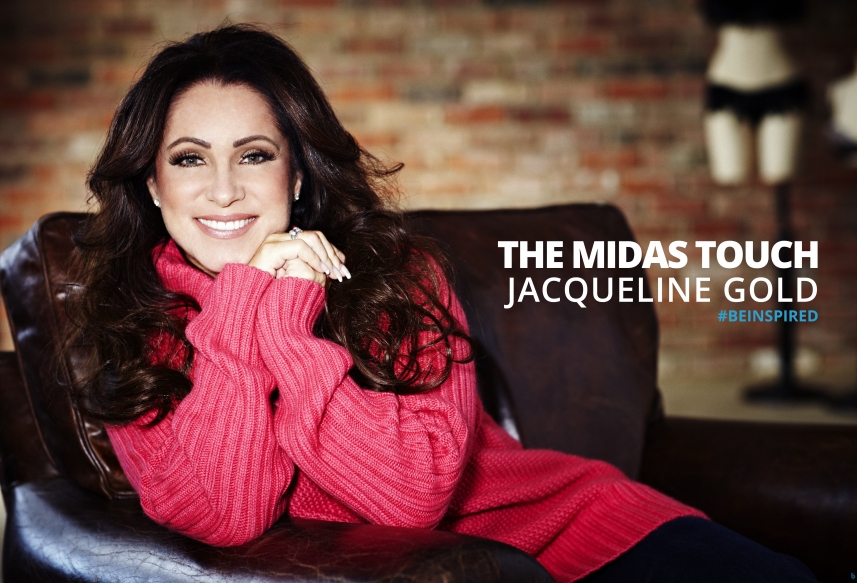 The Best You chats to the woman behind Ann Summers, Jacqueline Gold, about challenges in the business world and whether or not the modern woman can ‘have it all’.

Powerful, immaculate and full of self-belief, Jacqueline Gold is an inspiration to women all over the UK. She may have the demeanour of someone who has had things come easily to her, but Jacqueline has worked hard for what she has today, starting from when she was barely old enough to rent a car. While other people her age were going off to university and playing drinking games, Jacqueline was determined to get into the family business of Ann Summers, which her father, David Gold, had taken over in 1971.

“Well, I went to work at Ann Summers for work experience initially,” she remembers, but being the boss’s little girl didn’t mean she was favoured. Instead, Jacqueline was paid just £45 per week for her efforts – less than the tea lady.

If you go walking down the high street on a Saturday morning and pop into your local Ann Summers, you will find a very different sight to what Jacqueline was faced with three decades ago.

“We’re in an industry of our own because we’re not really a sex shop and we’re not really a lingerie shop,” Jacqueline explains. “You couldn’t buy sexy underwear in the high street several years ago and sex shops were clinical in appearance. To have empowered women by creating an environment wherein they feel comfortable shopping, is something I’m particularly proud of. I think Ann Summers is still very unique today.”

Ann Summers is so much more than a shop that sells sexy lingerie and toys to spice up your time in the bedroom. A big part of the Ann Summers business is the parties. Based on the old-fashioned pre-feminist Tupperware parties, Ann Summers Parties allow women to buy sexy lingerie in the comfort of their own homes.

“I was invited to have a Pippa Dee party, rather like a Tupperware party. And it was at that party that, women were saying ‘why don’t you do Ann Summers’ parties?'”

Great for women who feel too shy to shop at the stores, and great for a girls’ night in – certainly a step up from the old Dirty Dancing and Beaches marathons. The parties also benefit the Party Organisers financially, so they play a part in job creation, which is hugely important during this time of economic recession.

“It’s about bringing financial independence to thousands of women through the party plan.”

Despite Jacqueline’s successes in the business world, she never went to business school or had any formal training. Without the benefits of business education most of her peers have, what does she attribute her successes to?

“I like to think that I have demonstrated you can be successful without having that formal training,” she says. “I think there is an element of gut instinct. The three qualities you need are determination, passion and courage. I’ve always had a lot of courage, and while I don’t expect anybody to say so, you certainly do need to have courage. Even if it’s just to step outside of your comfort zone.”

Deciding against a formal education seems like a strange choice for someone clearly so business-minded.

“I hated school!” she laughs. “And I didn’t excel academically. I certainly could have done, but school was so different then. I’ve got a four year old and now school is all about making sure that your child is going to be happy at school. We know that’s what brings out the best qualities. But for me, there wasn’t the engagement that we have with children today in school. It was a good school, but I had a lot of home problems and that didn’t help either.”

Jacqueline has transformed Ann Summers from the clinical, male-dominated business that it was in the 1970s to a place where women can visit comfortably, either alone, with their girlfriends and even their partners. This transformation is something Jacqueline is very proud of.

“I feel very proud of what we’ve achieved,” claims Jacqueline. “Today’s generation would find some of the challenges that I’ve faced a few years ago quite unbelievable. You do have to pinch yourself and remind yourself. There I am standing with the Queen in 2004 being recognised with other successful businesswomen. Times have certainly changed.”

Jacqueline counts meeting the Queen as one of the high points in her career, but she has had some serious challenges to overcome as well.

“Receiving a bullet in the post when I tried to open a store in Dublin was fairly scary. I seriously considered not opening but I went ahead. It’s now one of our top three performing stores and it’s even on the tourist bus route so it was the right decision.”

Between the highs and lows, Jacqueline has shown that perseverance, hard work and courage will get you to where you need to be in your life, whether that is being the CEO of a Fortune 500 company, or a brilliant wife and mother. But can the modern woman have it all?

“I think you can have it all but not necessarily at the same time,” she says. “I think women are incredibly good at juggling all of the balls, and this is why we under-estimate how good we are. Women who are successful usually have a family, a husband and a home to run as well. There’s no successful man out there that’s doing that. I obviously ended up having a family later in life. For me, it’s been about being incredibly organised. I think you can [have it all] but we’re not very good at asking for help and you have to be organised and resourceful if you want it all.”

Hugely successful in business, with a fulfilling home life as well, what advice can Jacqueline Gold offer to those hoping to achieve what she has?

“I hope that I do inspire women and see that if I’ve achieved success, then so can they. I think the key thing is not to be put off,” she advises. “It’s about doing your research, and choosing something that you are very passionate about. I think it’s also about making sure that you have found a gap in the market and that you are offering a USP, whether it be a unique product, a unique service, a unique price point. You have to differentiate yourself from the rest of the market and offer the customer excellence when it comes to service. The winners are the ones that are really engaged and in touch with their customers. I think business today is very much about having the right team on board, but also about being extremely engaged with your customers.”

And what of her legacy?

“Empowering women in the bedroom. Liberating women between the sheets.”