The healthy alternative: an interview with Carol West

Home The healthy alternative: an interview with Carol West 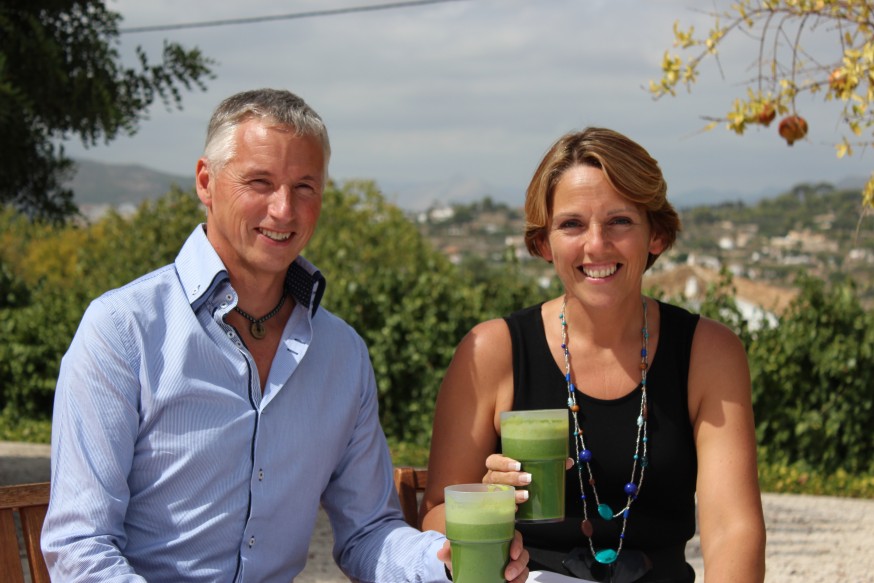 It’s not always easy to turn your life around, but for Carol West and her husband Andrew, it came from as simple a thing as changing their diet.

Carol was working in a nursery and Andrew was working as a police officer in Leicestershire before they struck out on their own. They were working very hard on four businesses at one time. Modern life is tough enough on its own, but when you’re trying to run multiple businesses with 70 employees whilst maintaining a family life, it can really take it out of you.

The stresses of pushing themselves so hard had far-reaching consequences for their health.

“We lived on takeaways, because we were working so hard”, she remembers. “I was on a bottle of wine most nights and a minimum of two litres of Coke a day. Because we were working so hard and we were making quite a bit of money, we’d just go out and eat and drink with no regard for our health. I was putting weight on consistently, and I was struggling with lots of digestive issues. My digestive system was a mess. Doctors were looking at doing exploratory operations to find out what was going on. I was stressed. I wasn’t sleeping. I was in a bit of a downward spiral.

Andrew wasn’t doing much better, with chronic fatigue syndrome (ME), persistent acid reflux and general malaise. They were both obese and bereft of any energy. Despite this, they still weren’t moved to change their lifestyles. The routine of bad eating had become too engrained. They attended a Tony Robbins event in 2006, where motivational speaker Joseph McClendon spoke very persuasively about the perils of eating poorly and the benefits of giving up meat, alcohol and dairy. Even then, their immediate response was not to change their diet.

‘He was actually quite an inspirational guy,’ Carol remembers. ‘But on that day he was saying no meat, no alcohol and we didn’t want to hear that. So we just walked out and went out for a steak and wine dinner.’

Six months later, Carol’s doctors were discussing exploratory surgery, and Andrew’s doctors were telling them that contacting Type 2 Diabetes was inevitable. They picked up the book they had received at the event, and Carol decided to go vegetarian. She immediately started seeing results and losing weight. This prompted them to delve deeper into diet and health research. The more they discovered, the more encouraged they were. They started juicing and had a green smoothie for breakfast every morning. After they started seeing these benefits, they decided to channel their new healthy lifestyle into their businesses. Carol had been training in colonic hydrotherapy and Andrew had done some training in hypnotherapy.

They were also struggling with their other businesses and decided to sell them. They opened their first clinic in Leicestershire called Obsidian Health, offering colonic hydrotherapy, smoking cessation, hypnotherapy and counselling. They loved the work. It was at this time when they received an interesting email.

“Somebody emailed me to saying they had a similar business in Spain they would like to sell”, she says. “It was exactly the same as what we were doing in the UK and on the same scale. We went to view it in the October, agreed to the sale in the November and on 3 January we actually loaded the van and drove to Spain.”

They took over the clinic and set about enjoying life in the sun. They devised a three-day detox programme involving colonic hydrotherapy and juicing. This was very well received by their clients and created a demand for a retreat that would promote discipline and good health.

“The three-day detox took off unbelievably well”, she says. “The clinic was packed, and people were having to stay in local hotels and B&Bs. This caused some problems, as it was difficult for our clients to be sitting with their juices watching people eating paella and drinking wine. We spoke to an estate agent who helped us find a villa. That’s how the retreat started. We launched with a very simple web page and a did bit of Google advertising.”

Their initial plan was to keep it as a simple retreat, but they were prompted to investigate further into the science of nutrition and include this aspect in their new business. Carol completed a course in plant-based nutrition held by Dr Colin T Campbell. With Andrew she attended various seminars organised by Dr Neil Barnard, Dr John McDougall, Dr Caldwell Essletyne, Dr Jeff Novick and Dr Joel Furlman. They studied everything they could find and were amazed to find that the work they had been doing was backed up by solid science. Carol qualified as a juice therapist and as a plant-based nutritionist and also learned the various food programmes so we could offer a full approach. They opened the Obsidian Retreat in February 2011, focussing on Diet, Exercise, Education and Mind-Set.

Success was slow boiling, until they had a success story of one of their clients combating diabetes published in the Mail On Sunday. From that point on they were inundated with bookings. They have had guests from all over the world including Australia, United States, Nigeria, Denmark, and Russia, with the bulk of their clientele based in the UK.

They have opened a juice cafe in their old hometown in Leicestershire and are currently building a frozen-juice venture. They set up a UK business called Healthy Stuff Online Ltd, from which they produce and sell online frozen juice programmes. After only eight months, they were selling approximately £50,000 of frozen juices a month.

And all of this came from a simple decision to eat healthier.

“The biggest joy for me is seeing people change”, Carol says. “The magic is watching somebody come to the retreat and after two or three days see that little chink of light start to come through. And have them come up to us after their final assessment saying, ‘Oh, my God, I’ve lost so much weight’ or ‘I feel so much better’… It is a true joy.”

One of the biggest challenges they have to face is a bewilderingly negative attitude towards healthy eating from the public. “We have to deal with people’s emotional connection with food”, she says. “That’s the biggest challenge at times. People come to us for two weeks and say that their biggest fear is going home and telling their family that they have stopped eating meat. Some of them would rather compromise everything they’ve done with us than to have that argument. I have to come up with ways for them to be able to integrate back into the family. People put up mental barriers. It’s the passion for helping people that motivates me. Not just our clients, but our staff as well. As many people as possible.

So, after all this success, what is next?

“We are looking at launching the food range on a commercial basis”, she says. “We’re looking into putting together another retreat somewhere else in the world. I’m also keen to pull together all of the information I have in my head into a book at some point. My ultimate goal is to make the world a healthy place.”

From the sounds of things, she’s already succeeded.