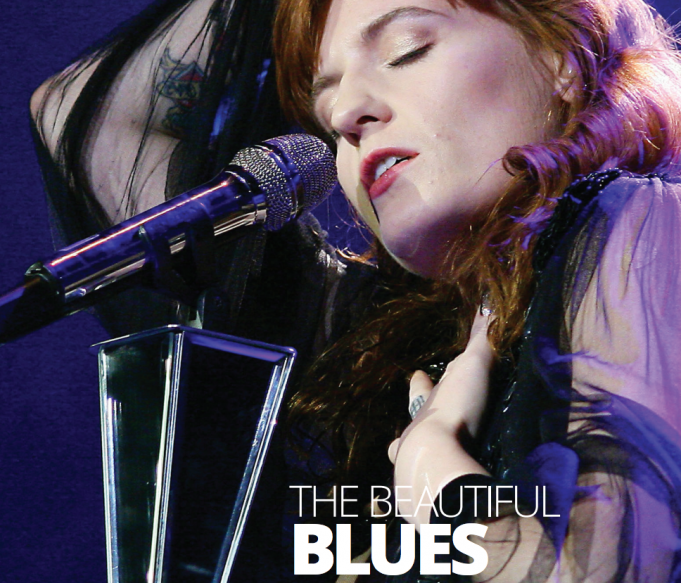 Florence and the Machine singer, Florence Welch, may be riding high with a summer of performances, but heartache has influenced her new album, How Big, How Blue, How Beautiful

Heartbreak is not such a bad thing for a songwriter – just ask Florence Welch. The Florence and the Machine singer admits that turmoil in her personal life helps when it comes to creating music.

“I find it really difficult to say things of importance to the people that I should be saying them to. So I end up writing it in songs,” she says. “And I can be direct in a way that I find it very hard to in person. And I don’t know if I would have easier relationships but less songs if I wasn’t like that,” she laughs.

How Big, How Blue, How Beautiful is Florence and the Machine’s third studio album and was produced by Markus Dravs. The album features the singles What Kind of a Man, St Jude, Ship to Wreck and Delilah.

After the incredible success of her first two albums Lungs and Ceremonials, Florence took a year off which was a tumultuous time for the 28-year-old. But she says, “It’s good to fall apart, because then you have to put yourself back together, and understand yourself more.

“I mean although there were conflicts and there were struggles, I actually feel like the record came out as a very ‘up’ record, which I was pleased about. I think in reaction to things being difficult it was my instinct just to beat my way out of it with trumpets and the loudest song possible.

“How Big, How Blue, How Beautiful was the first song that I wrote for it and it had this sense of everything being wonderful and things were boundless and this real sense of love. And then I had this year where I had to really face a lot of stuff and a lot of things didn’t work out how I wanted them to and there were things that were really sad.

“But actually through the process of making the record and putting all those things together I came back to the feeling at the start. So I’m glad that overall the record has a positive feeling because even though there were struggles I came out feeling better than I went in.”

For many artists, conflict and creativity are common bedfellows, and Welch says difficulties have always influenced her work. “I think I feel things quite strongly.

“I think it must be quite an odd thing. I don’t know. It’s weird though because when the songs actually go out there they become about so many other different things and they become not so much about one person, they become about everything. Once they’re released, it’s like a way to put it out there and then it becomes about all this other stuff.”

With the release of Ship to Wreck, there has been surmise about the song’s lyrics, which bemuses Welch. “I think the ship is either whatever I can have, that I’ve made, that I love. I have the capacity to create it and destroy it – and that’s within me. To make it and to break it, enjoy it and destroy it. I know that there’s that side of me that wants to just self-destruct and it’s still very much there but I’ve learned to contain it a bit more. That energy went into the record whereas I think in the year off I had without making things, I was very self-destructive.”

Stories have circulated about Welch’s capacity for partying, particularly with Beyonce, but the singer balances excess with healthier moments. “I have an enormous capacity!,” she laughs. “So I have to pick my moments very wisely or not at all. I drink a lot of Tequila with Beyonce – she’s really fun.

“When I came to make the record, I felt like I’d messed things quite up a lot in my life, in my house and my relationships. It all felt a bit exhausted. Usually I deal with things, especially like a break-up or whatever by going like, ‘Right I’m kamikaze-ing, I am in full self-destruct mode.’

“But there was something about making this record that actually flipped it up into almost protection and the record really stopped me from doing my usual heartbreak cliff jump. It sort of saved me and protected me and cocooned me for this year.

“Although it was difficult to process all that stuff it brought me to a place that I don’t think I’ve ever been before. I was like, ‘I’m figuring stuff out finally.’ So it was good to get a bit of space from my own demons.”

Freedom is certainly part of Welch’s stage persona, where her style has been likened to Kate Bush and Siouxsie Sioux. In the video for What Kind of Man, she says she enjoyed letting the music take over. “It was very freeing. It felt very cathartic, because when you are dancing you can’t fake it and it was quite empowering in a way. I felt exorcised afterwards.”

Welch has spoken of the velocity in which she was propelled into the spotlight, particularly following the band’s exposure as part of the BBC Introducing show. The recent year off gave her time to catch up with her own ‘growing up’ into adult life after a thunderstorm of events.

“It was like being dropped out of a hurricane,” she says, “except you didn’t land in Oz, you land in a house on your own in Kennington and you’re like, ‘Oh’. Yeah it’s like you have to do a lot of the little growing up things, the basics like sleeping, eating, not trashing the house on a Tuesday. You know, all of those, and realising that if you mess up your life, it’s your life, you can’t just move to the next city, you can’t just do a gig and make everything better. You have to sit with yourself and it’s like, ‘How do you do that?’

“When you’ve lived a life of constant travel and hotels, learning how to have breakfast in the morning and make your lunch and go to bed at some point. You know, that’s kind of really basic stuff but when you’re on tour with people, you live in a house with six brothers and sisters and then I just lived on my own which again was a big part of kind of figuring out who I was and it was intense.

“I was chaotic for a while in the house. I think that kind of comes across in the record Ship To Wreck. That was about that self-destructive side but I think it was good because I realised this is my life and this is my house now, so it was good to be responsible for my own life for a bit.”

Despite her success, Welch has said that her mother, whom she remains close to, hopes she’ll go back to university and study for an English literature degree, even though music is Welch’s passion.

“She thinks of it as quite a brutal industry, that you can get picked up and put down in. I think she’d prefer it if I did something more stable. But I might do an English literature degree after this record. I love writing and I love to read although this career already ties in most of the things that I love doing.”

Read about Florence Welch’s latest album and performances at thebestyoumagazine.co