The awakening by Martin Etheridge

Home The awakening by Martin Etheridge 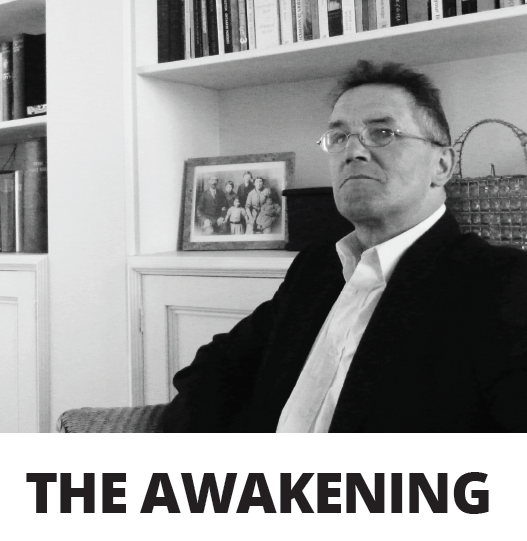 Author and former solider Martin Etheridge was in a near fatal accident when the brakes on the army truck he was travelling in failed on the way back to camp. Here he recalls waking up in hospital and his recovery

Emerging from a land of half remembered dreams and broken images into the cold light of day – so this is life; is it?

Open your eyes. For Christ’s sake open your eyes, blink – ahh, that’s better? No it isn’t. Through the mist that was my vision I could just about make out these barely distinguishable but strangely familiar shapes. Animal, mineral or vegetable?

Animal definitely. These strangely familiar shapes were all members of my family and, Jesus, there were loads of them. They were so far away, almost in the past. But this was now.

Hey, that’s my dad over there! And that’s my mum. “Hello mum, what are you doing here? Hang about, what am I doing her

…And that’s Harold, my uncle. And a host of other uncles and aunties all laughing and singing: “Happy Birthday to you!” Whose birthday is it?

“Happy birthday, son,” dad said. So it was mine. And this party was for me.

It’s funny but I never ever thought to have a party of my own, I enjoyed a good a knees-up, but my very own. All that clearing up afterwards. No thanks. I always thought of myself as the classic satellite-person – you know, the bloke who was always there but just out of reach, on the outskirts.

A gunner in the Royal Artillery; I was one of the most severe casualties, the result of a brake failure which caused the vehicle we were travelling in to veer off the road and down a ravine. Other severe casualties? Driver, Harold Bruce broke his neck and five others were killed at the scene. I was given the last rights and was expected to die there in the American zone, at U.S.A.A.F airbase hospital in Landstuhl, West Germany.

I was not expected to last much longer and my father, Norman, and uncle, Harold, were flown out to Germany to be with me. It was lucky for me that I was taken to an American hospital for I am told by them that the care and treatment I received at their hands was “second to none”. The driver of the vehicle, Harold Bruce who was taken to a different hospital did not receive the quality of care that I did. However, I began to show ‘positive signs’ and was flown back to England, still in a coma, to finish my dying there.

However, my condition continued to improve until I woke up from my vegetative state on my twenty-first birthday that is I became aware again on 22 March 1983 in Ward Two (head injury unit) of Queen Elizabeth Military Hospital (QEMH), often laughably referred to as the ‘Cabbage Patch’.

I was unaware at the time that the Falklands war was on and a number of ‘heroes’ from that campaign were in-patients in the ward. I remained a patient at QEMH for a further six months and continued to improve, I was doing great according to the medical staff of speech therapists, physiotherapists, nurses and doctors.

It was at the QEMH that I heard about a joint services hospital in Chessington run by the RAF – it was the place to be. There I would learn to walk again and because, at that time, I was dependent on a wheelchair walking was an obsession of mine, it had been all through my time at Woolwich and everyone there, family and staff alike encouraged this positive ambition. However, when I actually got there we were talking about a different kettle of fish altogether.

Joint Services Medical Rehabilitation Unit, RAF. Chessington was suitable for service personnel who were going to return to their unit but I was not going back to my unit was I?

After about six months, during which I was counselled and trained to become a ‘good’ wheelchair user, I was told by Commandant of the camp, that they could do nothing for me and I was discharged from hospital and sent home.

This was after a speech therapist, of all people, had already told me that I’d never walk again. I couldn’t talk, couldn’t walk, I had learned nothing at Chessington and I was turned out on my backside. There was a social worker at the unit. I remember I hated her with a vengeance, so I won’t mention her name but she, also, did me a big favour…

She arranged for me to visit Major Harris of the Royal Star and Garter home, where I was due to become a resident the next January. He, like me, was an ex-gunner and we really hit it off. Before then though I still had to go home and attend a day centre for a couple of weeks before Christmas. It was during that short period that I achieved my ambition. Nearly everyday after they’d finished their real day job, two male members of my family, my dad, my uncle or my brother would walk the length of the street with me supported between them, and thanks to them I slowly begun to learn to walk.

The rest, as they say, is history.

Martin Etheridge was born and raised in Twickenham, Middlesex and currently lives in Isleworth in West London, England. His mind unharmed by the experience, Etheridge used his newfound free time to pen his first book, after being given a typewriter by his family. What a Load of Rubbish is a hilarious story of perseverance that inspires and reminds us that anybody can be a hero, as long as they find out what they can – and love to – do, and truly give it their all.

What a Load of Rubbish by Martin Etheridge is published by Clink Street Publishing.