Tell them I will live my dream – David Bowie

Home Tell them I will live my dream – David Bowie 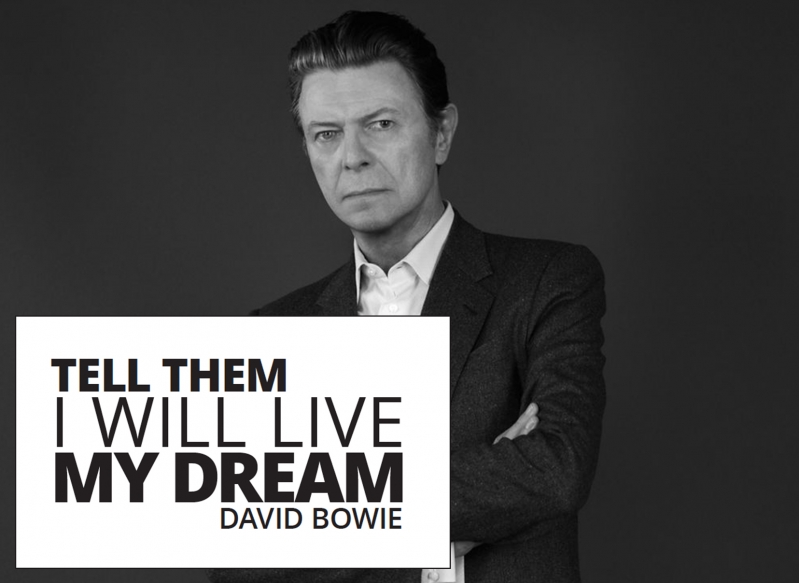 As David Bowie releases his 25th album, Blackstar, on his 69th birthday, we look at the life of one of the most influential recording artists in the history of rock ‘n’ roll

David Bowie’s life shows how a single aspiration, a dream, can pull an apparently ordinary individual to stellar success. In many ways, it’s the story of the power of chutzpah.

Born in dull, post-war Brixton in 1947, surrounded by rubble and bomb craters in a shabby, unremittingly grey landscape, little David Jones wasn’t close to his mother, Hilda, but was close to his indulgent dad, Haywood, who worked for Barnardo’s charity. School reports after their move to Bromley depict an ordinary child. Nothing hinted he’d become one of the most enigmatic creative forces of the late 20th century.

In 1955, Bowie first became energised by rock ‘n’ roll, which offered escape from the grey bleakness of austerity Britain. Age 11, he teamed up with best friend George Underwood to perform songs on the ukulele for his scout troop.

The pair practised Buddy Holly numbers at Bromley Technical College, where Bowie’s reports assessed him as ‘a pleasant idler’. He learned saxophone, listened to music and chased girls.

When Bowie lied in order to split Underwood from a girl he also liked, Underwood punched him, permanently paralysing the iris muscles in one eye, and producing the famous mismatching colours that became his trademark look.

Bowie forgave his friend and in return, Underwood invited him to play sax and occasionally sing in The Kon-Rads, an old-style dance band.

Surprisingly mature, he was accepted into The Kon-Rads because he was punctual – not something most musicians were renowned for. The youngest member of the band, Bowie was the first to recover from setbacks – a common trait of successful people.

He was also restless, pushing the band to write original material. But in 1962, after the band failed during a studio trial for Decca, Bowie left, and with Underwood formed The King Bees.

Next, he concocted a letter to entrepreneur, John Bloom, explaining why he needed The King Bees, arguing, “Brian Epstein’s got The Beatles and you should have us.”

Amused, Bloom asked colleague Les Conn, to check them out. Conn helped them find gigs, and release a single, Little Liza Jane. When it flopped, Bowie realised once again the band wouldn’t cut it, and walked out, despite their having appeared on pop show Ready Steady Go. To Underwood’s shock at his departure, he replied: “It’s Numero Uno, mate.”

Bowie always followed his own agenda, without sentiment. His traits of restlessness and selfishness were tempered by another: his sexual ambivalence, which often tipped from charm into flirtatiousness. When it came to winning over anyone who might prove a useful contact in a business filled with gay men, it was a winning combination.

Though ambitious, Bowie admitted he didn’t have the skills of other great performers and songwriters, once describing how he persuaded a band to write songs so he could see how it was done.

In this way, he honed his skill as a musician and songwriter, but his was a long journey with numerous misses – few near, many very distant.

One habit of mind served him well – positive visualisation. Bowie would often grow excited by imagining himself in the future, regaling them with stories of future mega success. This kept him focused on his longer-term goal, and was in many ways a counterpart to the letter he sent Bloom as a boy.

Over time he began to make headway. He shed his surname to avoid confusion with Davey Jones of The Monkees, opting for Bowie after becoming obsessed by a character in a Western.

In 1967 he signed with Deram Records and released The Laughing Gnome, a novelty song that flopped dismally. Next, he brought out his first album, shifting between styles as if to demonstrate his versatility. One song, When I Live My Dream, was a powerful number which foreshadowed Bowie’s future talent. But after the album flopped, he finally decided to leave the business for good and become a dancer.

This was possibly the best move Bowie could have made. Starting an affair with male dancer Lindsay Kemp, who adored his music, the pair discussed philosophy and psychology in a hothouse of ideas. Then, he fell for Hermione Farthingale, with whom he lived in genteel tranquility in Kensington. During this period, the influences he’d encountered over the preceding years coalesced, and he wrote his first great song, Space Oddity.

His second album, originally called David Bowie, and changed to Space Oddity in its 1972 re-release was rushed out to coincide with the 1969 moon landing. Though the single of Space Oddity did well, the album flopped leaving Bowie once again looking for new inspiration.

His next album saw him sharpen his offer, bringing a team together, including producer Tony Visconti to work on The Man Who Sold The World, which reached number 26 in the UK album charts.

Meanwhile, he persevered, spending long days mastering the piano. Finally all the elements of musicianship, performance style, lyrical brilliance and his unique view of the world came together in Hunky Dory, his first truly great album, in which numerous eclectic influences drove his creative engine to new heights.

Alongside his desire for fame he had always harboured a fascination for the bizarre and strange. In childhood, he was obsessed with science fiction, watching The Quatermass Experiment on television from behind a sofa so his parents didn’t know he was up. During the 1960s, he flirted with esoterica, witchcraft, Nietzsche and Buddhist philosophy. Finally, in the extraordinary album Hunky Dory, these influences meet in mentions of Himmler, Aleister Crowley and Homo Superior, to name but a few allusions. The album is now recognised as one of the best rock albums of all time.

His working method as “the tasteful thief” (as he called himself) was at last revealed: everything enters his creative pallet to be used and recycled.

Just so with his next album.

Inspiration came during a trip to New York, where he met Iggy Stooge (later Iggy Pop), a drug-addicted rock-star apparently heading for oblivion. Adapting his name and that of the Legendary Stardust Cowboy by whom he was also fascinated, Bowie created a new persona and band, Ziggy Stardust and the Spiders from Mars. He stole the chord sequence for Starman from Judy Garland’s Somewhere Over The Rainbow, and mixed his sexual ambiguity to make a classic, groundbreaking album that reached #5 in the UK charts. Bowie had arrived.

His career over the decades has been so varied and extraordinary, but the roots of his success can be traced to his early years.

So, what makes Bowie great? Some of the answers comes from his ability to change himself. His ability to charm both the girls and the boys gave him power in relationships. Some accused him of inventing the gay element in his character for exactly that reason, describing him as a cold user. But such accusations always seem to miss the heart of this enigma.

Another element of success is his restlessness, which has been present throughout his career. Before a project is complete, Bowie’s mind runs ahead to the next. His many faces – The Man Who Fell To Earth, Ziggy Stardust, the Pierrot of Ashes to Ashes, Mr Lawrence, Major Tom, Aladdin Sane, The Thin White Duke and many others – bear witness to perpetual change. He is rock’s chameleon.

But Bowie is no mad man. Yes, his work can be disturbing, dislocating and often groundbreaking, but that is because he looks forever into the future.

As if that one eye that is paralysed open is projecting himself ever forwards, while he waits for the rest of the world to catch up.

At a glance: David Bowie