Success in clear sight: an interview with Dan Reinstein

Home Success in clear sight: an interview with Dan Reinstein 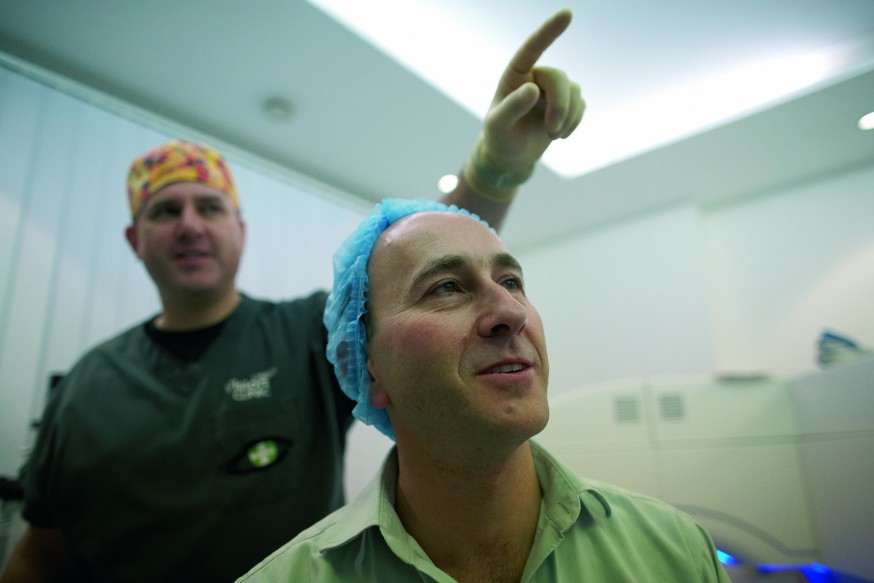 Meet Professor Dan Reinstein, a name synonymous with perfection: an innovator and scientist, a renowned musician, and an ophthalmic surgeon who is just as at ease designing lasers as he is caring for patients. Justin Stoneman shapes him into full focus.

My suspicion that this guest could be the near-ultimate exponent of ‘the best you’ mantra was confirmed early in the proceedings. Having asked Professor Dan Reinstein’s office to send me his CV, eighty-five pages landed into my inbox. It was the compressed edition. Peeling through the reams of success was an eye-watering task. The catalogue would make even Stephen Hawking feel like an underachiever.

In an extraordinary career, Reinstein, has made a string of medical advances, holds an endless list of patents and continues to set international standards in his field. He was the man who developed Laser blended vision – the LASIK treatment for ageing eyes. Earlier in his career, the Professor’s discovery that ultrasound could be used to scan the eye to within one micron led to him build the prototype for Artemis, now the world’s most accurate corneal scanner.

Reinstein, 51, holds more titles than Floyd Mayweather. The specialist ophthalmic surgeon is the medical director of the London Vision Clinic, the key medical consultant for Carl Zeiss, he is a research scientist, a voluntary faculty member at Columbia University P&S and he holds professorships in both New York and Paris.

In between these duties, the Cambridge graduate (with enough letters after his name – BA, MA, MB BChir, MD – to crush anyone at Scrabble), has also found time in his career to deliver over 400 lectures, grace 50 scientific meeting panels, publish over 100 peer-reviewed articles in medical journals, pen contributions for 32 books and 135 press articles and present 227 scientific papers. On top of all this, Reinstein also earns international plaudits as a jazz musician, having regularly performed with the world’s greats.

One suspects that Reinstein’s efforts to become his own ‘best you’ are a little difficult to fault.

Welcoming me into his plush Harley Street clinic, there are no traces of the airs and graces one would associate with an eminent Professor. Friendly and self-effacing, warm and fully engaged, Reinstein’s breakneck-speed chatter makes it clear that he knows the value of time. His clock ticks louder than most. “Let’s get started,” he says.

I start with the question I want answered the most. “You’ve enjoyed a life of extraordinary achievements, what is your secret?”

“The key component has been that I have always tried to leave no opportunity untested”, he says carefully. “I set the goals far higher than I can usually reach, way beyond what is realistic. On a quest, I will not let go. I will not sleep, I focus 110%, I will be constantly alert, so when that crack opportunity presents itself, I am there – I am awake, ready to pounce, to put my chisel in the crack. In one word, ‘indefatigable’.”

“Has that furious drive has always been in your blood?”

“Yes, it has basically been that way my whole life”, he says. “I think both my parents were very focused people, very hardworking, workaholics to be honest. My father was a pharmaceutical researcher and my mother was a theatre person. They had passion and were both obsessed with what they did. They had good values.”

“You have three children now yourself, have you tried to instil that same drive?”

“I joke with my kids that that they can do absolutely anything they want – once they have graduated from medical school! I tease, but yes, I’d be flattered, but the key message I want to tell them is that they have to find their own voice. When you find your own voice, work becomes what you love doing. Instead of loving your work, do work that you love.”

From philosophy to some hard facts. The London Vision Clinic is regarded as a world leader in laser eye surgery, patients flock from around the world to be treated there and Reinstein himself has performed over 20,000 procedures. He regularly teaches his techniques to surgeons internationally.

“How and when”, I asked, “was the clinic conceived?”

“Craig Engelfried is my partner in the business, and he is an old friend from childhood. We had not been in regular contact, but a close mutual friend of ours, who subsequently tragically died, brought us together. Craig was finishing a job in the UK for a California company. Our friend brought us together. I’d just moved back to Europe from America, and Craig suggested I should start a clinic. I said I don’t know anything about business, but he said he could help me. That was back in 2001.”

“Are you and your business partner well matched?”

“Perfectly”, says Reinstein. “He has almost the identical personality to me in terms of how we do things, but his is from a business standpoint – diligence, highest demands for customer care, ethical practice, best possible value for the patient. He is brilliant.”

“You first knew each other as children, did you connect with those similar traits in him when you were younger?”
“You don’t really notice those things as a kid, but I knew he was a high achiever. He was head boy, prefect, captain of everything, so he was already in that kind of mould. The London Vision Clinic has been built around an ethos. We have demanded the highest quality in every way that we can.”

Reinstein is rather less vocal about the extraordinary role that he and Engelfried have played in changing eye care in a remote area of Nepal. You will not see it mentioned in the press, but away from the plush surrounds of Harley Street, Reinstein and Englefried used their combined medical and business skills to remarkable effect in one of the most impoverished regions on earth.

The London Vision Clinic Foundation is a charity set up to share their advanced technology in deprived areas. Their partnership with the Tilganga Institute of Ophthalmology in Nepal has enjoyed fantastic results. As the photos testify, patients used to only the most rudimentary healthcare now have access to state-of-the-art eye care treatment. Reinstein has been keen to highlight the role of others in initiating the project. However, I know, courtesy of a little research, that his input has been extensive.

“We cannot believe how lucky we are to have found a conduit for the work that we wanted to do”, he says. We are affiliating with an organisation that is already doing great work, but needs help. The more we do, the more they can do to help everyone else. I see them as one of the major contributors to the World Health Organisation’s 2020 initiative to eradicate preventable blindness.”

The Professor’s life is also dictated by music. He has been playing the saxophone religiously for 25 years, including two years of study at the world famous Berkley College of Music. He has played with a long list of the world’s greats – in a remarkable twist he has provided surgical procedures on the eyesight of many as well.

“I only ever wanted to two things in life – to be a great musician and a great sight saver. I love music but it is hard work, a never-ending bottomless challenge. The knowledge base for jazz is always half-full. Using my instrument on stage to communicate with other musicians is amazing. Jazz is mathematical – improvised music is complicated interplay between theoretical and artistic sides, the right brain and left brain totally working in harmony”.

“Can you close by telling us your recipe for success?”

“As I said, doing what you love. Personality that lends itself to endearing themselves to you is important. Maybe in my case it is polarising – my friends are few but they are really my friends – but having a strong sense of whom and what you are is important. It is crucial to focus on things you are passionate about. For me it was medicine and music. Find your love and give it your all.”

Dan Reinstein at a glance

Being ‘the best you’ is not simply about excelling in your own field. Maximising your potential means going the extra mile – professionally, personally and for the betterment of society. Professor Dan Reinstein is an epitome of that philosophy. He has innovated in his field and he fights daily for constant improvements and advances.

To his London Vision Clinic patients, ‘Professor Dan’ is the caring doctor guiding them through laser eye surgery and gifting them improved sight. Having performed over 20,000 procedures and revolutionised the field, each patient knows that they are in truly safe hands. To others, Reinstein is a research scientist, filing patents, developing lasers for Carl Zeiss Meditec, constantly pushing his field to new levels of excellence. If you are a jazz fan, you may know Reinstein as an acclaimed saxophonist. Taking to the stage at Chelsea’s famous 606 Club every week, he exchanges complex improvisations with the world’s finest musicians. ‘The Prof’ is always full of surprises.

The secret to his success comes down to passion. Simply “do what you love,” he instructs. “Find your voice and you will excel”, he says. Commitment, doggedness and indefatigability are the words that best describe the man and his approach to life.

Whether it is on an individual basis with the patients he treats, or on a global level with thousands benefitting daily from his medical and scientific advancements, Reinstein’s influence is clear to see.