Streetwise and savvy: an interview with John Bird

Home Streetwise and savvy: an interview with John Bird 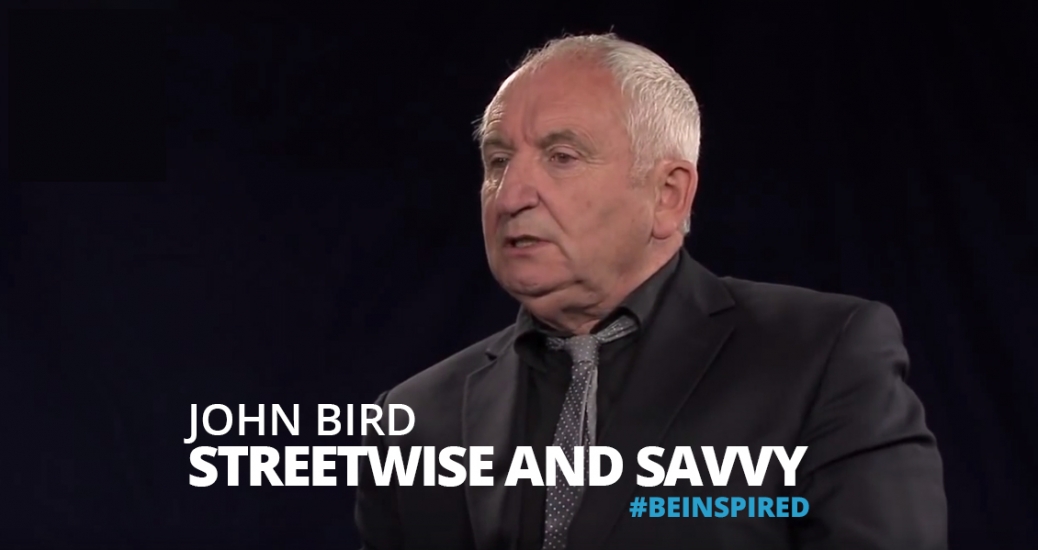 As the founder of The Big Issue, the magazine the homeless sell to make a living, John Bird has helped countless people throughout the world. He tells Bernardo Moya how a life of poverty, crime and homelessness gave him a unique insight into helping others.

John Bird has strong ideas about what helps the poor and what doesn’t. “A hand-up, not a hand-out is the best possible thing you can do for somebody,” he tells me.

The man sitting across from me at the TV studio interview has a powerful, animated face topped by receding greying hair. He seems to me the template for a classic London East End hard man, while his direct manner marks him out as someone who will be heard.

Plenty of people have listened. His uncompromising yet caring message of personal responsibility has been spoken into the ear of leading politicians from both left and right.

“Virtually every government that’s ever been in, for the first 10 minutes, they’re in love with us,” he smiles. “Because we reduce the amount of people who go to prison… When you see people selling The Big Issue, you know they’re not shoplifting. You know they’re not begging.”

His message has often been critical of the politicians. His response to Tony Blair’s assertion that “we live in an age of giving” so outraged him that he wrote an open letter to the UK Prime Minister along the lines of:

He recalls, “I challenged him to create a society where the giving was giving opportunity.”

And John knows plenty about poverty.

He grew up with his three brothers and parents in two rooms in a Notting Hill slum just after the war, which had the highest infant mortality rate anywhere in the country. His father, a local Protestant had married an Irish Catholic from the countryside. They drank, fought and neglected their children, filling them with racism, classism, and a disregard for education.

“It was a terrible place to bring children to – rats, dirt, one toilet shared by 12 families… it was a really horrible introduction to life…”

Yet it was “the most wonderful place I’ve ever lived,” he says without irony. “It was extraordinary, the depth of the community. Everybody just looked out for each other.”

When Bird was five, the family were made homeless after missing the rent, so for six months they lived in a condemned house. When he was seven, his parents split up and he moved to a Catholic orphanage in North London. After three years, he came out and “immediately started shoplifting, stealing cars, daubing swastikas and all sorts of other stuff… and really got into a lot of grief very quickly.”

By age 14 he was in a detention centre. At 14 and a half he was excluded from school. “They just signed the register because I was so much trouble. I wouldn’t accept the authority, I was a racist – my mum and dad had done a good job of making me hate everybody, Blacks, Jews, Indians, even English people.”

He was a “pretty poisoned, screwed up person” who left school with only one asset: a “Napoleonic complex” meaning he believed he was the most important person on Earth. “I still do,” he adds with a grim smile. “I always thought that I was here to save the world, even though I was a little geezer who couldn’t read or write.”

A stretch in Ashford Boys’ Prison for receiving money under false pretences prompted his turnaround when a prison officer helped him learn to read. On leaving prison, he returned to reformatory school where he was “saved” because he’d “at last got some education and had started to paint and draw.”

To his mother’s surprise, at the age of 18 he went to art school, where she feared half-jokingly he would learn to become “middle class” and “homosexual.”

Then, after getting a girl pregnant and marrying her, he was thrown out of art school. Eventually, after more difficulty with the police he ran away to Paris at the age of 21.

It was here that he got ideology. “I met these really posh Marxists, all going on about the working class and smashing capitalism, and I thought, ‘Socialism… they’ve already got socialism, what do they wanna smash capitalism for?’” But his new Marxist friends challenged his racist views and he began to listen.

On his return to England he joined a revolutionary party, but life wasn’t so different from before. “I’d been a Catholic shoplifter and now I was a Marxist shoplifter,” he shrugs, recalling how he lived under false names and addresses to avoid the police. This turbulent time finally ended when he remarried and got steady work as a printer, which he got by lying about his qualifications. “I’ve always believed that if you can’t achieve something because you haven’t got the degree or whatever, then tell them you’ve got all the degrees in the world, get the job, and then prove yourself.”

By the early 1970s and through the 80s he was earning a decent wage running his own business. Then The Big Issue came along to change everything. It was the idea of Gordon Roddick, the multi-millionaire head of the famous High Street chain The Body Shop.

John had known Gordon 20 years earlier when he was a young man, and Gordon now asked him a straightforward question:

“Are you one of those persons who crawls out of the woodwork when somebody makes a lot of money?”

“Well, I know where you’re coming from,” replied Roddick.

“The best con is to tell the truth, isn’t it, sometimes?” Bird smiled

The Big Issue was inspired by a trip Roddick took to the US where he saw a similar scheme. In the UK, there were serious challenges to overcome.

“I remember having a major meeting in a place called Lincoln’s Inn Field, where there were about 1,200 homeless people sleeping in this small park on the edge of the City, near Holborn. I said, ‘Look, we’ll give you the papers for the first month and then you’ll have to pay for them.’ They went absolutely ape shit!”

Accused of exploiting the homeless by selling them magazines, he replied, “Yeah, that’s right, you’ve always been given stuff for free. That’s why you’re still homeless.”

“We got about eight very big Scotsmen and said, ‘Look, we’ll give you £50 a day if you stop them trying to burn down our vans and beat us up.’ We did what Imperialism does; it goes to a country, picks the big people, and calls them police to control everybody else.”

In a short time the Holborn homeless were obeying his rules, staying in order. If they were rude to the public, he would take their badge away.

Then, when the Government started providing the homeless with Social Security, Bird was unimpressed: “Very quickly they emptied the streets of thousands of people and put them into the system… While we were trying to get them working, the government was getting them parked up – warehoused as long-term unemployed people, where most of them still are.”

Bird’s message is complex – far more so than the “problem” of homelessness as presented in the papers.

“You don’t just help people,” he tells me. “You must invest in the person, and find the drive to help them realise themselves.”

He knows “countless stories” of brilliant people in the underclass “who should be running the country.” But with no investment in their education they have no opportunity.

“Enrich the lives of people in need, you’ll get that investment back a hundred times,” says John. “You’ll move them from being outside of society, into being ratepayers and taxpayers.” All this is the alternative he sees, to the expensive waste that is prison.

John Bird’s message, and his life story are compelling arguments for his cause. It’s not about helping people. It’s about giving the right sort of help. Let’s hope that somewhere along the way, the politicians will listen.

John Bird at A Glance