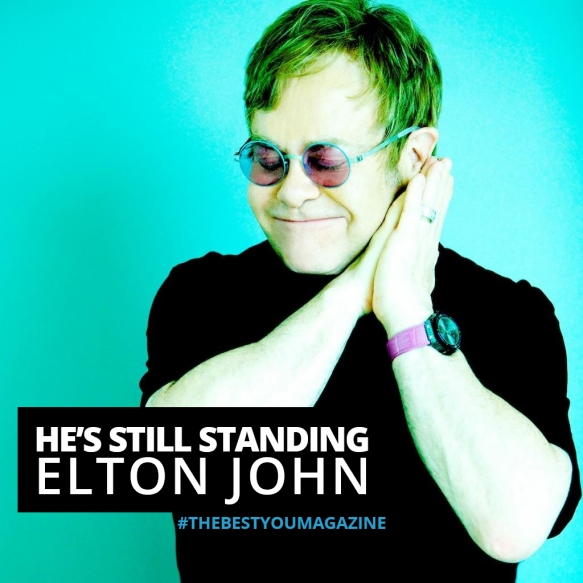 It’s been 40 years since the release of Elton John’s hugely influential album Goodbye Yellow Brick Road. The Best You finds out what went into the mix to create one of the world’s most durable stars.

In 1947, Reginald Dwight, son of Stanley and Sheila Dwight, came into the world and grew up in his parents and grandparents’ council house in Pinner, North London. From these humble beginnings, he started out on his own yellow brick road to stardom.

The son of a World War II RAF pilot posted in Iraq, young Reginald Dwight rarely saw his father for the first four years of his life. Instead, his mother took charge. Having long wanted a girl, she refused to cut young Reginald’s long blond curls, indulging herself in some quite girlish baby photos of her boy. She was strict with him in some ways, and the seeds of his artistic introspection were perhaps sown when she decided not to let him get dirty playing with other boys, insisting he play alone in the family’s backyard.

Nevertheless, he had his mother’s support in other ways. When at the age of three little Reggie picked out on the piano the melody of The Skater’s Waltz, a nineteenth century classical piece, he instantly became the family’s musical prodigy. Sheila supported him in his musical endeavours, arranging for Reggie to perform for friends and family.

This broad early musical upbringing was a seedtime for his personality and his passions. Because of his weight and his shyness, his energies were driven into music. At the age of five to a piano teacher whose lessons he devoured. Asked what he wanted to be at this time he confidently replied “a concert pianist”.

However, he also inherited a love of Rock ‘n’ Roll from his mother. There was a tension between being a ‘serious’ musician and an entertainer, which became more pronounced for Reg when Sheila enrolled him in the Royal Academy of Music at the age of 11.

There was undoubtedly something special about Reg’s musical skills. In the entry exam to the Royal Academy, his tutor played him a four page piece by Handel. Reg played it back to the examiner by ear, almost note perfect.

Though regarded as a model student by his Academy tutors, Reg skipped lessons, relying on his innate ability to get through. The truth is, the tension between classic and popular music was beginning to show. It was becoming clear his heart belonged to Rock ‘n’ Roll.

But he hardly seemed rockstar material. Reg was a fat, small, nervous boy, devoid of charisma who hid behind his spectacles out of shyness. In fact, his later trademark glasses were initially unnecessary, being inspired by a musical hero.

“I didn’t really need them,” Elton says, “but when Buddy Holly came along, God, I wanted a pair like his! I began to wear them all the time, so my eyes did get worse.”

When Reggie’s parents divorced when he was 14, his mother’s new man, Fred Farebrother arranged for Reg to get his first gig at the Northwood Hills Hotel. As a weekly performer playing piano and singing, he was paid the princely sum of £1 a week, plus a collection at the end of the night.

His first night was a difficult one for Reg. If the audience didn’t like what he was playing, they hurled abuse or threw ashtrays – the ash trays at least being of the tin variety, so they didn’t hurt too much. Reg persevered for 18 months, and, as word spread about the talented youngster, he sometimes took as much as £25 in an evening.

By now, Reg Dwight knew he wanted his future to be in popular music. He decided to leave the Royal Academy and drop out of school to get work as an office boy for Mills Music. His teacher at the Royal Academy tried to dissuade him for 45 minutes, but his mind was made up.

Working as a tea boy at Mills Music, Elton John also started his first band – Bluesology. When the band got a manager, and recorded a single, ‘Come Back Baby’, written and sung by Reg Dwight, they started to get more gigs.

However, big success eluded them and they started to work as a ‘pick-up’ band, supporting visiting American stars such as Patti LaBelle and the Bluebelles, Billy Stewart, and Major Lance, who took them on tour around the UK.

Reg charmed many of the artists he supported, and Patti LaBelle spoke highly of his piano-playing, though less highly of his card-playing ability, at which she always beat him: “I might have sent him home with an empty pocket, but I never let him leave with an empty stomach.”

Reg also met Long John Baldry, a singer who was to become a lifelong friend, and Bluesology worked as a backing band for him.

By now, however, Reg realised he had to get out on his own and become a star in his own right. With customary decisiveness, he reinvented himself with a new stage name, taking the name Elton from his bandmate Elton Dean, and the name John from Long John Baldry.

As Elton John, he applied to Liberty Records, who were looking for new talent. It was then that luck came in to play.

Though Liberty Records did not see the young Elton John as a recording artist, Ray Williams at the studios introduced him to the work of 17-year-old lyricist Bernie Taupin. Elton liked his work, and, after the pair hit it off, they were eventually signed to Dick James Music, being paid to write songs together and produce hits.

For two years Taupin and John worked together, living with Elton’s mother and cranking out dozens of songs a month. At times they would become disheartened, but Elton’s mother would give them a reality check, telling them, “Right, piss off… go on, there’s a job going up the greengrocer’s.” This would soon get them back on track.

It was in 1968 that Elton, at the age of 21, very nearly got married to a woman called Linda Woodrow. He met Linda at a gig and took pity on her because she was being beaten by her boyfriend. She took his virginity, and they moved into a flat, together with Taupin, in London.

Things did not go well. The relationship was stormy. When it was announced they were going to get married, it was long John Baldry, himself a gay man, who took Elton to one side and told him that if he married Linda, he would not only be messing up one life, he’d be messing up two. John Baldry knew the truth: Reg was gay.

For Reg at the time, this was something of a revelation. He broke off the relationship and moved back home with his mother. She fiercely supported her son’s decision, telling him clearly, “If you marry her, I won’t speak to you again.”

So it was that both Elton and Taupin moved back into Sheila’s home – though there was never a question of a gay relationship between Elton and Bernie. They regarded each other as brothers, with a fraternal love and affection for each other.

Things were changing. Elton John was a jobbing musician, playing piano on hits for the likes of Tom Jones, The Hollies and The Barron Knights. One day, he even met Paul McCartney at Abbey Road Studios whilst on a session. Even if stardom had yet to touch his shoulder, he was definitely moving in successful circles.

Eventually, Taupin and John did write an album of songs together called Empty Sky. It was not a huge success, but it did create enough interest for his next album, Elton John. Though this album was not huge in the UK, it did receive a lot of airtime in the US. So it was that in 1970, Elton John went to the US for the first time to play The Troubadour Club. It was this gig that would change his life forever.

The gig was attended by Neil Diamond, Gordon Lightfoot, Mike Love of The Beach Boys and numerous other stars of the time. He started off slowly on the gig with some quieter ballads, but then realised by the fourth song that he wasn’t being listened to and suddenly kicked away the piano stool and declared: “Right! If you won’t listen, perhaps you’ll bloody well listen to this!”

This was the legendary gig that launched Elton John’s career. He left the UK a minor musician, and came back a superstar. Thus began the most creative part of his life, which led to the extraordinary album and mega-hit Goodbye Yellow Brick Road, to countless hits, and to massive sales worldwide.

Looking back at his early life, you can see that, although Elton John was in some ways an ‘overnight success’, everything he had been doing from the age of four had been feeding into it. His mother’s encouragement of him as a musician was a starting point; his own determination to become a popular entertainer was another; his ability to charm others, to be single-minded about what he was doing were all contributing factors.

More than any of these, though, it was his determination to stick at things that were working and to change those that weren’t – to break out and try new things when success sidestepped his approach. When Bluesology didn’t bring him the success he wanted, he walked away from it and reinvented himself as a songwriter. There was also the luck he had in meeting Bernie Taupin, a songwriting relationship that still exists today.

His decision to remake himself as an outrageous camp figure was a stroke of genius. His shyness about his private life, his drug taking, his search for happiness in a loving relationship – these are all parts of the whole that make up the man.

And, the fact is, that after all this time, he is, no doubt about it, still standing.

Elton John at a glance