Still Jenny from the Block

Home Still Jenny from the Block 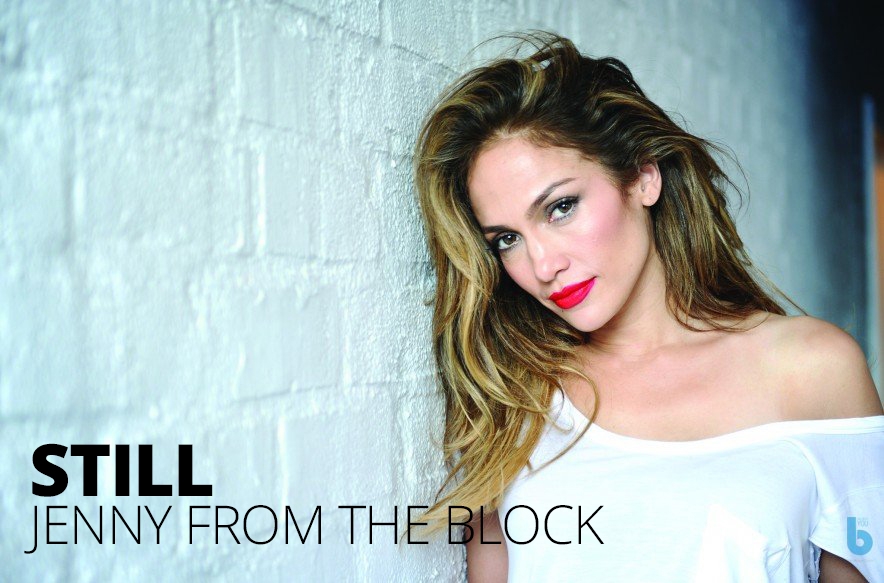 Pop superstar, actress and TV judge Jennifer Lopez on juggling her career, being a single mom-of-two and dealing with the pressures of being in the public eye.

She’s been a Fly Girl, a movie star, a pop superstar, a tabloid staple, a businesswoman, a philanthropist and, most importantly to her, a mother. It’s been a long journey of many twists and turns for multi-talented superstar Jennifer Lopez, yet she still sees herself as Jenny from the block. As she is celebrating the launch of her tenth album, AKA, she is in a reflective mood, ready to look back on her life and career.

Born Jennifer Lynn Lopez in 1969, half a lifetime away from fame and fortune, in a decidedly working class corner of The Bronx, her father worked for an insurance company, and her mother was a housewife. She lived with her parents and two sisters in a small apartment before the family had saved up enough money to be able to purchase a two-storey house, which was considered a big deal for the relatively poor family. Even though they weren’t a wealthy family, Lopez’s parents stressed the importance of a strong work ethic and being able to speak English. They made sure that their children had the necessary skills and principles to succeed in life.

“So much of what I’ve learnt from parenting, I’ve learned from my own parents”, Lopez says. “Kids don’t do what you say; they do what you do. I watched my parents. My dad worked nights, and I was aware of how much he was doing for us. My mom was a Tupperware lady and also worked at the school. I always felt that I couldn’t let them down. And I had a natural discipline from early on. I was always training for something.”

What she was training for was a life of superstardom. She started performing at a young age with the encouragement of her family, already taking dancing lessons when she was five years old and touring New York with her school when she was seven.

“I can remember dancing and singing in front of the mirror in my bedroom”, Lopez says. “I’ve always had dreams – the dreams have just gotten bigger.”

She grew up to be a gifted athlete, but her heart always belonged to performance. When she was in her final year at high school, she won the role in a low-budget film called My Little Girl.

“That was when I realized that I wanted to be a famous movie star”, she says.

When she expressed her dream to her parents, they were initially opposed to it. They told her that it was a stupid idea and that it was an impossible goal for Latinos. She eventually dropped out of college and moved to Manhattan, determined to make her dreams reality. She performed in a couple of stage productions and even did a stint on a Japanese TV show. But her big break came when she was recruited as one of the famous Fly Girls on In Living Color, the seminal comedy show.

“My mom and I butted heads”, Lopez says. “I didn’t want to go to college – I wanted to try dance full-time. So she and I had a break. I started sleeping on the sofa in the dance studio. I was homeless, but I told her, ‘This is what I have to do.’ A few months later, I landed a job dancing in Europe. When I got back, I booked In Living Color. I became a Fly Girl and moved to L.A. It all happened in a year.”

A handful of low-profile acting gigs followed before she garnered attention in the relatively unsuccessful Money Train with Wesley Snipes and Woody Harrelson. She then proved her acting chops in the biopic Selena. Her performance as the ill-fated Latin diva won her acclaim as well as interest from Sony Music Entertainment’s Tommy Mottola. Successful film roles soon followed (including hits such as Anaconda, U Turn and Out of Sight) and she released her debut single, “If You Had My Love” in 1999. It was a risky move, spreading her talents across acting and music, but it paid off when she became one of the most successful film stars turned pop stars in the world.

She has proven to be one of the most adaptable stars, able to ride out the vagaries of fashion and trends. Part of this is not forgetting her humble roots. As she has always asserted – and despite unflattering reports that claim her to be a diva – she’s ‘still Jenny from the block’.

“I always felt that was unfair”, she says of the ‘diva’ label. “It might be because I have nice stuff. I came from virtually nothing, so there was a time when I was like, ‘Oh my god, I can have that car or I can have that coat.’ I don’t think anybody in my position wouldn’t have done the same thing. But you get to a point where you want to strip down. Not that I won’t have a nice bag, but I’m going to sell that big museum-type house and get a nice cozy house, and I’m going to have one car and trade the others in. I want to go back to something simpler.”

Part of the reason that the whole ‘diva’ thing started and spread was because of her eventful and well-publicised love life. She’s been compared to Elizabeth Taylor because of her multiple marriages and high profile relationships. Her romances became tabloid fodder from the outset, when she divorced her first husband, Cuban waiter Ojani Noa. After their split, he threatened to reveal everything in a tell-all book. Legal intervention by Lopez’s attorneys put an end to that. She went on to date rapper and businessman Puff Daddy. The two made headlines when they were arrested in connection with a nightclub shooting in Times Square. She was quickly exonerated. She then married and divorced her back-up dancer Chris Judd before moving on to become a ‘super-couple’ with Ben Affleck. After they broke up, she married long-time friend and fellow Latin pop-star Marc Anthony with whom she had twins Max and Emme. The couple split after three years. She then dated former back-up dancer Casper Smart before splitting up recently.

About being single again, Lopez says: “As women, we get so panicked about being aloneand being without a man. To be honest, that iswhen we are able to truly soar. That in turn allows us to attract the perfect person; when you’re comfortable within yourself.”

She is happier than she’s ever been. One of her main focuses is her wellbeing. After all, maintaining that famous J-Lo physique takes a lot of hard work.

“I try to eat much better than I used to”, she says. “Part of it is teaching mykids to be healthier and have longer livesthat we can spend together.I am like anybody else, I hate going to the gym. It takes time out of my day just like everybodyelse. But you have to be healthy. Luckily, dancing helps keeps me in shape.”

Like all other parents, juggling work and family life can be challenging for her.

“Both worlds exist at the same time”, Lopez says. “It’s not like one gets turned off when the other is on. When I am working, I amthinking about what are the kids doing. And then when I am with them I’m thinking about all the work I need to do. As a single mom you always have ten juggling ten balls in your hands.”

One of the balls that she has been juggling very successfully is her role as a judge on American Idol. Her appearance has led to a spike in ratings and made her one of the most popular personalities on the show. It’s a mutually beneficial situation, as she derives a lot of satisfaction from it.

“Being a judge allows me to see things from adifferent perspective”, she says. “It forces you to take a hard look at things that you could to improve yourself.”

When you consider her TV work, her film work, her music, her fashion line and fragrances, it’s hard to deny the massive impact that Jennifer Lopez has had on our cultural landscape. It’s been a long, hard road to overcome the insecurities at the beginning of her career.

“When you are coming up in this business, there are millions of insecurities”, she says. “You have to learn how to navigate the minefield of being in the public eye.When bad things happen, you pick yourself backup and you keep going and you remember who you are and where you came from andwhat you do. I’ve worked very hard to be where I am today and I feel that I have earned the right to face the world and proudly and say,

Jennifer Lopez at a glance