Stephen Covey by Will Edwards

Home Stephen Covey by Will Edwards 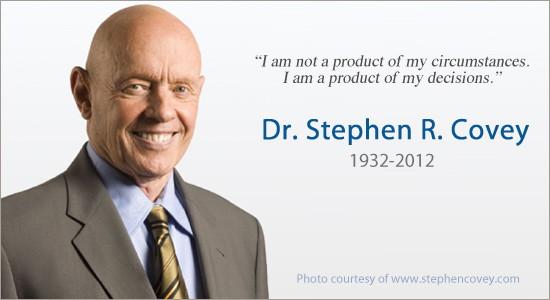 Dr Stephen R Covey was born in 1932. He lived with his wife, Sandra, and their family in Utah; in the Rocky Mountains. Sadly, he died as a result of complications, following a bicycle accident, on July 16th 2012, aged 79 years old.

Covey achieved international acclaim, and is perhaps best known, for his self-help book The 7 Habits of Highly Effective People. which was first published by Simon & Schuster in 1989 and has sold around 12 million copies word-wide.

Covey has a Harvard MBA and has spent most of his career at Brigham Young University, where he was professor of organisational behaviour and business management. In addition to his MBA, he also has a doctorate which he completed whilst at Brigham Young University. Dr. Stephen R Covey has received the Thomas More College Medallion for continuing service to humanity and has additionally been awarded four honorary doctorate degrees.

Stephen is also a co-founder of the Franklin-Covey organization, which specialises in the application of Covey’s principle-centred approach to leadership and management. He is widely acknowledged as one of the world’s leading authorities on the subject of time-management. Thousands of organizations across the world, including many of the Fortune 500 companies, have adopted his innovative techniques on leadership, teamwork, and customer-focused service. His best-selling book on time-management, First Things First, co-authored with A. Roger & Rebecca R. Merrill, according to Simon & Schuster is the best-selling time management book ever.

The seven principles he presents in the 7 Habits are not original thoughts – he does not claim to have originated the ideas but simply to have found a framework and a language for articulating the time-less principles embedded into the seven habits. The 7 habits are to be found, he says, in all the major world religions. He believes the principles themselves to be ‘self-evident’, that is, ‘you cannot really argue against them’. His view is that all highly effective people, and enduringly effective organizations, have utilised the 7 habits, to a greater or lesser extent, to sustain their success.

Actually I did not invent the seven habits, they are universal principles and most of what I wrote about is just common sense. I am embarrassed when people talk about the Covey Habits, and dislike the idea of being some sort of guru.

Every human has four endowments- self awareness, conscience, independent will and creative imagination. These give us the ultimate human freedom… The power to choose, to respond, to change.

I am personally convinced that one person can be a change catalyst, a “transformer” in any situation, any organization. Such an individual is yeast that can leaven an entire loaf. It requires vision, initiative, patience, respect, persistence, courage, and faith to be a transforming leader.

In the last analysis, what we are communicates far more eloquently than anything we say or do.

Management is efficiency in climbing the ladder of success; leadership determines whether the ladder is leaning against the right wall.

Most people struggle with life balance simply because they haven’t paid the price to decide what is really important to them.

Our character is basically a composite of our habits. Because they are consistent, often unconscious patterns, they constantly, daily, express our character.

The key is not to prioritize what’s on your schedule, but to schedule your priorities.

There are three constants in life … change, choice and principles.

We are not animals. We are not a product of what has happened to us in our past. We have the power of choice.