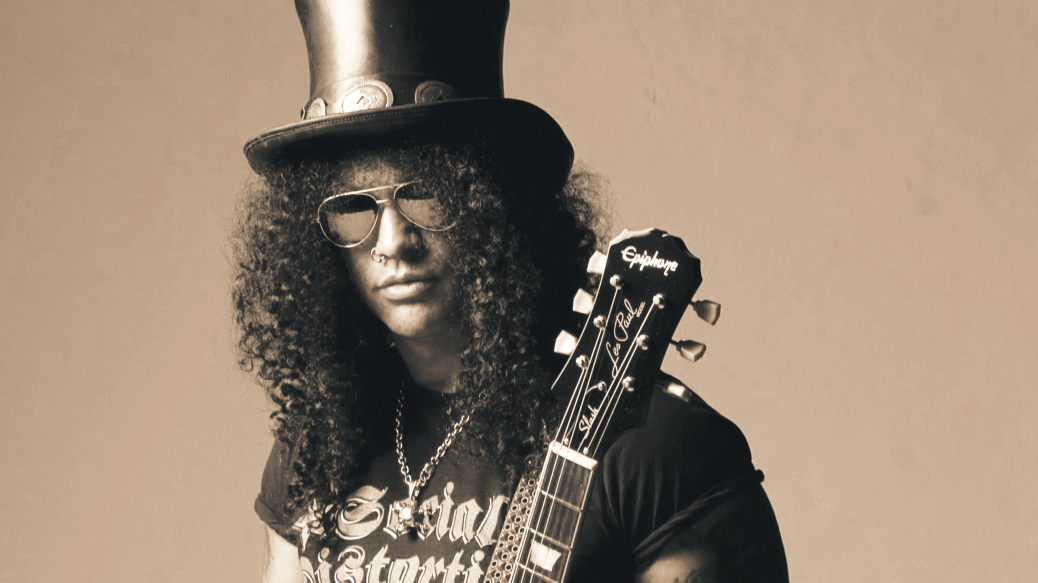 “I had no aspirations to be a musician, but I picked up a guitar for two seconds and haven’t put it down since.”

Before he became one of the most famous and well-respected guitarists in history, Slash was born as Saul Hudson. A quick study of his background and it becomes apparent how he chose music. His mother was a costume designer who dressed several famous musicians in the 1960s. His father, in kind, created artwork and album covers for performers including Neil Young. Slash was very young when he and his father left England to join his mother, who had pursued work in Los Angeles.

After passing on the trumpet as his instrument of choice, Slash found his way to the guitar and formed his first band in Los Angeles with childhood friend and future Guns N’ Roses band mate Steven Adler. Unable to find a singer that suited their tastes, Slash and Adler eventually joined another band known as Hollywood Rose. That group featured a particularly talented singer known as Axl Rose. Guns N’ Roses, or G N’ R as they became known, immediately cultivated a reputation for mayhem and a hard-partying lifestyle in the budding L.A. rock scene of the 1980s. Slash would go on to create one of the most distinctive guitar sounds ever for a rock band. When listening to a G N’ R song, you can immediately recognise his sound. The group went on to worldwide fame and has sold millions upon millions of albums. Despite battles with drugs and alcohol, Slash has prevailed through it all, placing a new priority on his health, and in recent years, he has created a solo sound all his own. In 2012, Slash was fittingly inducted into the Rock and Roll Hall of Fame.

“Slash is living proof that no matter how far you fall into the spiral of drugs and alcohol, you can turn it around and opt for a healthier life. If he was able to do this as a guitarist for one of the most hard-core bands of all time, that gives hope to the many people out there suffering through addiction.” – Bernardo Moya