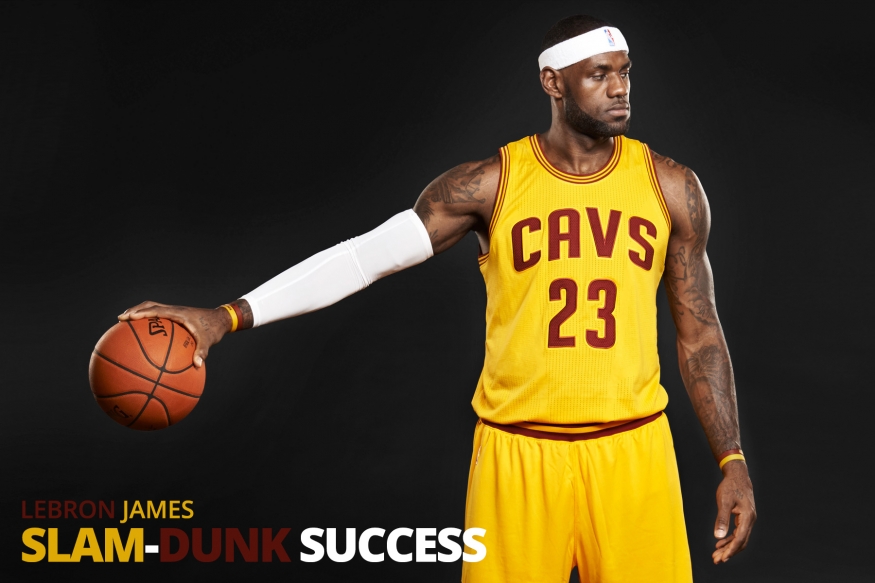 LeBron James is widely considered to be one of the best, if not the best, basketball player active in the game today. He slam-dunks with ease and makes shooting from the three-point line look as easy as breathing. Dr. Stephen Simpson looks at what separates LeBron from the other ball players.

LeBron James’s many achievements include winning two NBA champion titles with the Miami Heat. His move from the Cleveland Cavaliers to Miami in 2010 was controversial, but the change of scenery paid off for James – financially and professionally – when he led them to consecutive NBA titles in 2012 and 2013.

His playing form and leadership skills during this time convinced the experts: James is the best active player in the world. His is frequently compared to basketball legends like Magic Johnson and Michael Jordan. Many feel that he is better than both.

His playing brilliance, warm personality, and stable personal and family life, have won him both respect and numerous lucrative endorsements. This has made him one of the highest paid athletes in the world, earning an estimated $56.5 million in 2013.

To the surprise of those not familiar with the world of basketball, many also consider James as one of America’s most disliked athletes. This dislike is linked to the manner and timing of his controversial move to the Heat in 2010. Loyalty is prized more highly in basketball than in many other sports, and Cleveland fans filmed themselves burning his shirt in disgust at his perceived disloyalty. What makes LeBron James the best? You do not become the best by accident. There are thousands of good basketball players, hundreds of great ones, but only one can be the best. The difference between the great players and the best in any sport is wafer thin. “The best” entails an exquisite balance of body, mind, and soul.

James is certainly an outstanding athlete, but he does not take this for granted. He knows how much hard work and preparation is required to maintain peak fitness. Like all athletes, he is also acutely aware of how fragile optimum fitness can be. He has already suffered episodes of recurring lower back pain, and has designed a rigorous programme of ice treatment, stretching, yoga, and massage that has proven effective so far. He follows this programme several times a day, and on long flights will perform his stretching exercises hourly. James also illustrates perfectly the connection between emotions and peak performance. If emotions are negative or unstable, it is very difficult, if not impossible, to find the zone by having your head in the right place.

This is perfectly illustrated by the uproar that followed James’s decision to leave the Cleveland Cavaliers for Miami Heat in 2010. The move affected him deeply, and James’s demeanour changed.The ready smile was replaced with an angry glower. His form suffered too, as authenticity and balance is everything to peak performance. In a Sports Illustrated

interview in 2012, he explained how he was able to return to his winning ways. He told himself, “This is what you love to do and you’ve been doing it at a high level for a long time, and you don’t really need to change anything.

Just get back to what you do and how you play, smiling all the time and trying to dominate at the highest level. Do it with joy and do it with fun and remember that not too long ago this was a dream for you. Playing in the NBA was the dream. Don’t forget that again. Just go out and improve.” James was able to correctly identify that his negative emotions were affecting his form, and, indeed, his whole life. Fortunately this period of black moods was relatively short. James was able to move on, exert control over his emotions, and his form returned. Other mental qualities that have made James so resilient, especially in times of adversity, include unshakeable self-confidence, a willingness to embrace criticism, and a grounded approach to dealing with pressure. He possesses the confidence that comes from knowing that if he follows all his key processes, the results will surely follow, and so he does not need to be worry about them.

The final ingredient needed to create James’s genius was luck – more specifically, to have three special friends in high school, all of whom shared his obsession with playing basketball. They were Sian Cotton, Dru Joyce III, and Willie McGee. Talent hotspots in sport are a recurring theme, and not just in basketball. LeBron James is living proof that talent on its own is not enough to perform at the highest level. It also requires massive commitment, time, mental strength, the best coaches, the best playing partners, and a healthy share of luck. James knows that this peak-performance cocktail is tenuous. As a result, he treats every day that he plays basketball as though it were his last, revelling in the simple joys of his game. Perhaps you too have the potential to be the best in your chosen field? Follow at least some of James’s success strategies, and the results that follow might just surprise you.