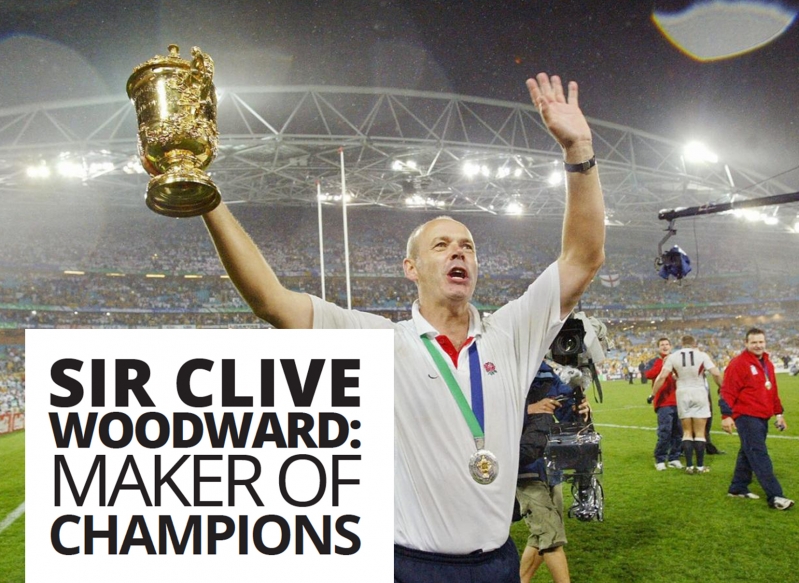 Prior to his appearance at The Best You Great Minds Seminar on 28 February, former England Rugby Union coach Sir Clive Woodward – who is famous for bringing the Rugby World Cup home to England in 2003 – tells The Best You about his life, his attitude to coaching, and what exactly makes a champion

He did get his A Levels there, and after a brief stint working in London and playing for the Harlequins Rugby Club things began to change. Partially on the strength of his performance with Harlequins, he got into Loughborough University. It was there he met the first great coach in his life, Jim Greenwood.

”He absolutely was the turning point for me in many ways,” Woodward beams. “Firstly, as a rugby player because it was just amazing to play in this team at Loughborough with a bunch of guys who were my age. He was the best coach I’ve ever had, still is. He wrote a book, it’s probably the only rugby book I’ve read on coaching, called Total Rugby. I got to know him very, very well and he undoubtedly had the biggest influence on me as a person, definitely as a player.”

So, how did he do it? What skills does a coach need?

One thing Woodward is adamant about is the ability to continue to learn and “capture knowledge” so you can use it to your advantage. That’s why he has written a software programme called Capture, specifically to do the job.

“The moment you lose your real passion for study, for knowledge about your subjects then you had better do something else.” He calls himself a “sponge” for the way he absorbs so much around him.

“You’ve got to always, always be pushing the boundaries. You’ve got to always, always be trying to find new things, new ways of doing things,” he says. Talking about The Best You Great Minds Seminar he’ll be delivering on 28 February, he says: “I have a saying, and I’ll say this at the conference: talent alone is not enough. Talent gets you into companies, into sports teams – but you’ve got to understand the people you’re competing with have also got talent.”

“I have four words. You’re either talented, a student, a warrior or a champion.”

“A champion is someone who has got all those things and the ability to work hard,” Woodward tells me. He has attitude. “I like the word attitude, he says. “I like people with the right attitude but you’ve got to define what you mean by attitude and the attitude is all about hard work. So if you’ve got those three things on top of talent, you’ve got a chance of being successful.”

“If you’re leading a team, you’ve got to absolutely be very clear about how you are looking at people,” he explains. “Everyone fits into one of those four areas. Very few are champions, to be honest. You’ve got to be very, very special to become a champion. Lots of people can get to a warrior status, but I’ve called very few people a champion.” So, in building a winning team, one of the coach’s skills is to identify where each person fits on that pyramid.

“The most important thing about any winning culture is you have to get the buy-in from every single person in the team. By that I mean it’s got to be a two way thing.” Part of setting a culture is to agree the rules the culture operates in. Woodward gives the example of punctuality as a discussion point. He asks his team to discuss what punctuality means and then discusses it with them. They all agree the rules together.

“We have hundreds and hundreds of things. We create team sheet rules. It can only become a team sheet rule if you’ve got 100 per cent agreement with the team. Once you define what punctuality actually means, everyone’s got to sign up to it. Then you as the leader, you’ve got to lead on it. You’ve got to absolutely make sure it’s adhered to. There’s no excuses then because if every member of the team has an input, one of them can’t say, ‘well actually I don’t like that’ or ‘that rule doesn’t fit with me’.”

Come and see Sir Clive Woodward live at The Best You EXPO on the 27th and 28th of February at ExCel. Click HERE

AT A GLANCE: SIR CLIVE WOODWARD