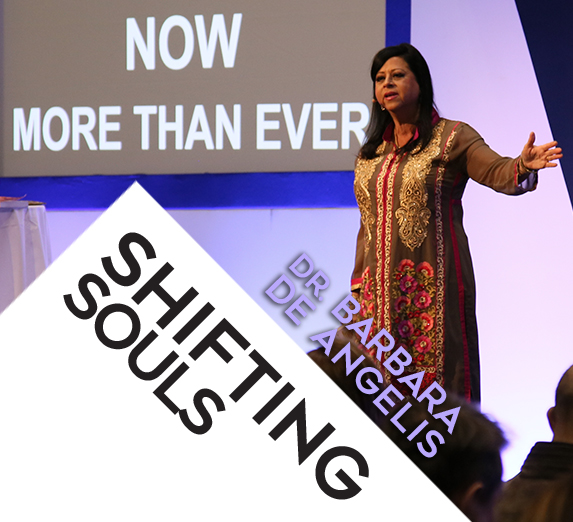 One of the highlights of the first day of The Best You Expo was the powerful talk given by Dr Barbara De Angelis. Her European fans came out in force to meet her, and she did not disappoint, spreading her own brand of wisdom and common sense in her truly unique way

It has been 20 years since Barbara De Angelis was last in the UK and, as she commented, things have changed. She cited the fact that you can now get a decent coffee, and the food has improved – but that wasn’t all that has changed. Throughout the world, people are waking up – and it was the process of awakening that she traced in her two talks at The Best You Expo.

De Angelis is a fascinating figure. Dressed in orange silks, with raven-dark hair, she radiates a timeless spirituality.

But her message isn’t one of vague etherealism, it’s about how advanced spirituality affects your everyday life and the people around you.

“Your own wakefulness, your own consciousness, your own shifting, vibrationally, blesses other people, just as you walk through the world.

So you may think you came here for yourself, but you are an ambassador right now.

The people in the room had answered their cosmic alarm clock and woken up. It made them advanced souls who had started out on a new stage of consciousness. And now more than ever, being aware of that new consciousness was vital, in a period in which the world is in a battle between light and dark.

In many ways her message was about taking responsibility for the thoughts and actions you have and do, and to recognise how that affects the whole world.

Her own role was that of a teacher. She compared herself with the map that you might be given in a giant museum, making sense of so much data, and getting people to see the best routes to take.

She was also clear to say that the path of awakening is open to everyone. No-one is disqualified from becoming more conscious and more aware because of their past.

In fact, “The things you think disqualify you, qualify you.” The very things people have experienced have turned them toward soul-searching. Sometimes, the confusion in a life is the doorway to greater understanding.

De Angelis took the audience through her own life, relating her own journey, and commenting that the very act of seeking for answers was “your inner awakening in action”. In fact, the sense of confusion, of never feeling quite in control, of meeting problem after problem can be a sign of increased spiritual velocity. She called it “divine discomfort.”

The feeling that your life is out of control and you are having to hold on tighter because you are going faster, and the world seems a blur because of it.

Her job, as a mystic and a teacher is to help her students find the answers to questions that spring from divine discomfort.

“Who am I?  What am I doing here? What am I supposed to do in this life? Why, sometimes, can I feel so clear, so connected and other times as if I’ve forgotten everything I know? Why are so many people so cruel? Why am I feeling homesick for some place I don’t even know about, but I keep thinking this isn’t how it’s supposed to be?”

In her case, when she was young, she wondered why people were so often so mean to each other.

It was as if she had been born in the wrong world. When she was 18 she found her first spiritual teacher, the famous Maharishi Mahesh Yogi in the 1960s, when she was attracted by a poster to go to a meditation.

She took many years investing in her own enlightenment, and didn’t start teaching until she was in her thirties, famously touring the US with Wayne Dyer and Deepak Chopra. But though they were teachers, she insists that everyone teaches everyone all the time. People are affected by the way you speak to them, people’s lives are moved, “soul shifts” occur.

So, how to make your soul shift to your highest, and for it to stay with you?

The secret is through cultivating a sense of higher consciousness, in which you see everything you need to see about yourself. You dispose with the illusions, and look at yourself, your life and those around you clearly. To live with the fog of your limitation cleared away.

One way to think about this is to use the soul shifts mantra: the key to awakening in each moment.

“How do we usually think? More like this: Today I’m not going to see anything that upsets me. I’m going to only see things my way.

“What do we usually say? I don’t want to feel anything that makes me uncomfortable.

I don’t want to feel anything that’s going to challenge or make me have to make choices. You know, I’m feeling something, I’m just going to have a few glasses of wine and I don’t really need to feel it.

Today I’m going to feel whatever there is to feel…

“Because feelings are maps; they’re guiding you somewhere. And to know what there is to know, because when you see things and you feel enough, knowing this will happen. Wisdom occurs.

“This soul shifts mantra is so powerful. I’ve received tens of thousands of letters and emails and posts about it. It will shift… and you can do it when you’re faced with a situation. I talk about how to do that in more detail in the book.”

De Angelis’ talk included many more insights and words of advice to her audience, and was divided between a morning and afternoon session. Towards the end of the second session she offered a powerful meditation, full of kind advice. Many delegates spoke of how impressed they were.

Afterwards, she signed books for her followers and students, giving them her attention for three hours. It was a powerful and impressive display of wisdom and knowledge, in which her honesty and authenticity shone through.

A powerful event which made many soul shifts occur.

Dr. Barbara De Angelis is one of the most influential teachers of our time in the field of personal and spiritual development. For the past thirty-five years, she has reached tens of millions of people throughout the world with her inspirational messages about how to create a life of true freedom, mastery and awakening. As a best-selling author, popular television personality and sought after motivational speaker, Barbara is legendary in the field of personal transformation as one of the first people to popularize the idea of self-help in the 1980’s, and as one of the first nationally recognized female motivational teachers on television. Through her sold-out seminars, TV and radio programs, publishing and speaking, she has created her own Barbara De Angelis Brand, and is sought out not only by corporations, celebrities, and entrepreneurs, but by anyone who wants to learn how to transform themselves, their business, and their relationships from the inside out. Dr. De Angelis is the author of fifteen best-selling books which have sold over ten million copies and been published throughout the world in twenty-five languages. She has had an amazing FOUR #1 New York Times Bestsellers, including Real Moments, Are You The One For Me?, Secrets About Men Every Woman Should Know, and Chicken Soup for the Couples Soul, as well as HOW DID I GET HERE? Finding Your Way To Renewed Hope and Happiness When Life and Love Take Unexpected Turns, which received numerous awards and high acclaim. Dr. De Angelis’ television career has been just as far-reaching as her publishing career. In 1994, she wrote and produced the TV infomercial, Making Love Work, which won top honors in the industry, and was seen throughout the world by hundreds of millions of people. Barbara appeared weekly for two years on CNN, and has hosted her own daily television show for CBS TV, and her own popular radio talk show in Los Angeles. She has been a frequent guest on OPRAH, THE TODAY SHOW, GOOD MORNING AMERICA, and THE VIEW, as well as a regular contributor to E Entertainment and EYEWITNESS NEWS in Los Angeles. Barbara also produced and starred in a one hour special for PBS Television. Over the past twenty years, Dr. De Angelis has been in demand as a motivational speaker and is known for being one of the most moving and inspirational female presenters in the world. She has given hundreds of presentations and keynotes to groups including AT&T, Proctor & Gamble, Crystal Cruise Lines, and Young Presidents Organization. She has been a featured presenter at countless conferences along with His Holiness the Dalai Lama, Sir Richard Branson, Deepak Chopra, Wayne Dyer, Louise Hay, F. W. De Klerk, Les Brown, and many others. Dr. De Angelis is the recipient of the highest honor from Toastmasters International as their Golden Gavel Award Winner for 2007—one of only FIVE women to receive this award in Toastmaster’s 50-year history for being one of the most outstanding speakers of the century. Recently Dr. De Angelis was one of the featured inspirational teachers in the new documentary DISCOVER THE GIFT, along with His Holiness the Dalai Lama, Reverend Michael Bernard Beckwith, Sri Sri Ravi Shankar and other spiritual luminaries. Dr. De Angelis is currently president of SHAKTI COMMUNICATIONS INC., dedicated to bringing enlightened messages to the world through all electronic and print mediums. Dr. De Angelis’ remarkable life achievements span over three decades, and she credits her dedication and unrelenting commitment to her own personal journey as the source of all that has come through her to millions of people. She is a serious seeker who has deeply immersed herself in spiritual practice and study from the age of 18, and spent many years in residence with several of the most renowned spiritual masters of our time. It is on the foundation of this profound inner wisdom that she offers her life-changing programs on “TRANSFORMATION FROM THE INSIDE OUT”. Dr. De Angelis lives in beautiful Santa Barbara, California. Her most recent book is SOUL SHIFTS: Transformative Wisdom for Creating a Life of Authentic Awakening, Emotional Freedom and Practical Spirituality, published in 2015, which debuted as an international bestseller.
http://barbaradeangelis.com/