The Man Who Makes The Very Best Cocktails by David Saunderson 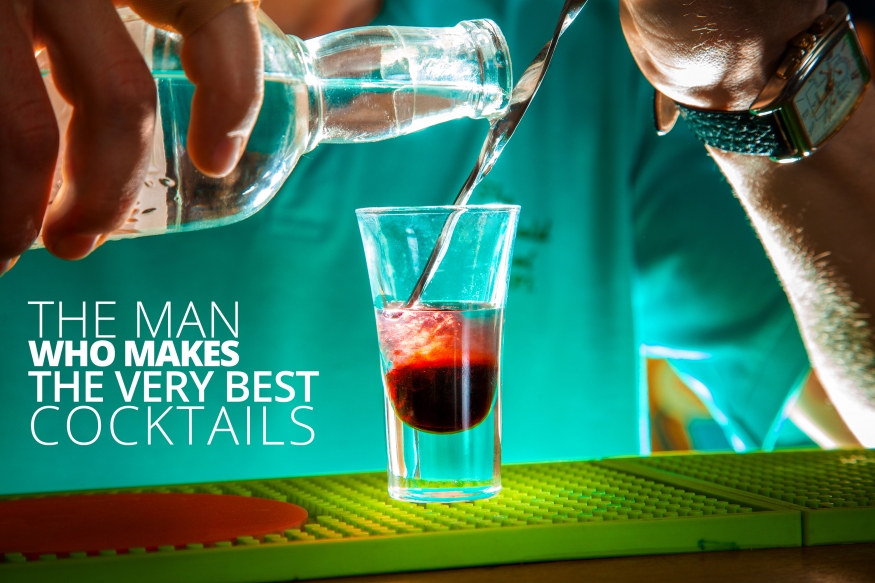 Top cocktail bartender Gorge Camorra believes if you’re going to do anything in life, give 100 per cent and be the best you can be! David Saunderson chats to him about how he implements these beliefs.

Gorge Camorra laughs when he is asked how he refers to himself.

“I call myself a spiritual advisor as I love to advise you on what spirits you should drink. Seriously, I’m just a bartender.”

Just bartender he may be, but the Spanish-born Australian has just returned from placing third in the world’s toughest cocktail mixing contest.

Gorge Camorra came to cocktail pouring later in life. Originally an air-condition mechanic, the people person felt climbing into dusty ceiling cavities wasn’t for him. Instead Gorge decided on an even darker world of nightclubs, when he opened his own bar in Geelong near Melbourne and started mixing drinks.

“I always had a curiosity about alcohol and I walked into a cocktail bar in Melbourne and watched the cocktail bartenders showing their craft and I thought ‘Wow – I want to do that!’ which at 35 years old was a huge change from air conditioning.”

He set about becoming the best bartender he could be. “I was mostly self taught through trial and error, by reading cocktail books and watching YouTube.”

Six years later, he has placed third out of 15 in the Gin Connoisseur Program, an international competition of bartenders in Cognac, France.

Regarded as one of the toughest bartending contests in the world, Gorge joined the best of the best in a range of tests and challenges. The competition concluded with a final challenge where competitors had to serve cocktails to 350 guests within three hours.

“Competing in the GCP was a personal goal of mine and I was on a mission to get to Cognac and represent Australia. I began preparations for the competition six months before I even qualified in the preliminary final so I was very happy that all the time and effort had paid off.

“It was the biggest highlight of my bartending career and competing against incredible bartenders from all over the world and learning as much as I could from them was something that I had only dreamed of.”

It was not the first time that Gorge Camorra had competed internationally for Australia. He competed in the World Open Kyokushin Karate Championships in Tokyo in 2008 where he placed 14th – a stunning feat for a competitor who only started training in martial arts a few years earlier.

“Like everything in life, I believe that if you commit to something you need to give it 100 percent and I guess I was well-trained by fantastic and experienced instructors.

“I believe that karate has taught me to have confidence in your abilities and prepare well for any challenges that you take on whether it be full contact knockdown fighting tournament or even a cocktail competition.

“Trust me though, it is a lot easier on the body training to compete in a cocktail competition!”

Despite coming third in an international cocktail competition, Gorge is quite humble about his cocktail-mixing abilities, especially when it is suggested he is one of the best.

“I would not say I am one of the best as there many bartenders in Australia alone that are more knowledgeable than me, that I look up to and respect. I believe that we can be the best on a certain night in a competition, but I really do have so much more to learn.

“I just want to keep competing and most importantly continue to try to perfect my craft and have as much fun as I can along the way.

“Not until I can create a drink that is good enough to be considered a contemporary classic like a Cosmopolitan or Japanese Slipper and be featured on lists all over the world, will I say that my drinks are great.”

Gorge has always been a big believer in giving back to the community. That’s why he now regularly holds accredited courses at his Cloud 9 Bar & Lounge in Geelong West, where he teaches his students the art of mixing a drink and hospitality.

What advice does he give his student to be a great bartender?

“Have fun and be confident but also be humble. There seems to be There seems to be a huge number of bartenders out there that think they are rock stars – get over yourselves – we mix drinks, we don’t rescue people or cure cancer!

“The most important thing you need to have to be a great bartender is the desire to make sure that the customer has a great time and that they leave your venue feeling better than when they arrived,” Gorge says. “Anybody can create a nice tasting drink but being humble and treating customers like they are number one should be a bartenders main goal.”