Setting the mood by Stephen Doran 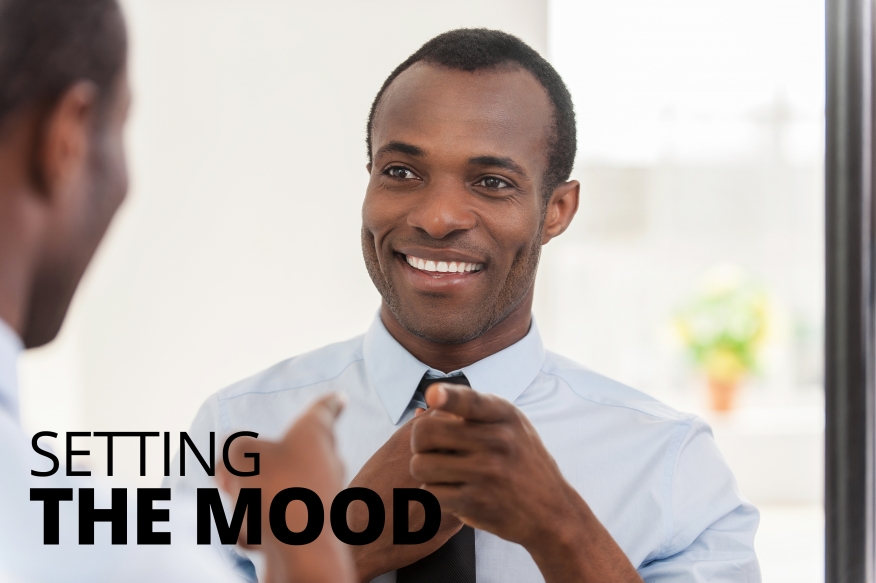 What came first – the frown or the bad mood? We know that one’s internal state is often clearly demonstrated through an overt physiology. Slumped shoulders, drooping head and frowning face. Yet physiology and mind state are not too dissimilar to the chicken and egg paradox. Our tone also tends to run in alignment with our mood; we know when someone is sulking or ecstatic from the way they say what they say. Your body language and tonality don’t merely reflect your internal emotions; they are in fact often the cause. This is great news as it means we can consciously utilise them to influence our emotions. Let’s face it; a happy life is a good one.

When we open our body language and adopt more empowering expressions, we communicate to our mind to also open up. Another added bonus is the way this non-verbal communication is received by others. We have all heard the old saying, extracting (and often misrepresented) from the work of Albert Mehrabian in 1971, that only 7 per cent of our communication is words. The remainder comprises of 55 per cent body language and 38 per cent tonality. Avoiding being pedantic over the precision and context of these statistics, what we can agree on is that what they do indicate is a huge chunk of our communication lies beyond our words alone.

People often say they can hear a smile through the phone; of course what they are in fact referring to is the tonality. Interestingly Mehrabian goes on to say that if there is any incongruence between your words and your tonality, 86 per cent of the time people will trust what they gauged from the tonality over what was handed to them linguistically. This is also true of our inner dialogue; the way in which we say what we say to ourselves.

In NLP this would fall under sub modalities; the difference in tone, speed, volume, pace, analogue marking and so forth that one presents or represents dialogue to oneself is bound to influence the reception.

Try it for yourself and you will see. First try a voice of judgement and anger, shouting the message to yourself: ‘just like that!’ See how it makes you feel to attack yourself in that tone. If you close your eyes and really allow yourself to experience the tonality, what physiological and emotional response do you realise?

Now try the same phrase again but proud, as though you are almost bragging at how well you completed a task, ‘just like that!’ How does this make you feel? What do you notice? I’m sure the two responses are totally different. The responses of course greatly influence the response, which in turn influences the behaviour, which in turn determines our results.

Finally repeat the same phrase in your mind but this time whisper it in an attractive and seductive tone, ‘just – like – that!’ Need I say more?! When it comes to our body language and facial expressions, there has been extensive research done around the link between psychology and physiology. Specific areas of the brain are stimulated by body positioning to create happiness and the value for us lies in knowing how we can better enable this stimulation, in order to instil regular happiness in ourselves.

Smiling is something that has been widely studied; amongst the better known reports is the 1989 work by Robert Zajonc. In this, subjects were not asked to smile, this would have given the game away somewhat, instead it was a blind study, meaning the participants weren’t aware what was being observed. So how do you make someone smile without telling them and without making them happy first? I’m glad you asked.

Zajonc had participants repeat vowel sounds such as a long ‘e’ sound, which stretches the edges of the mouths. Other vowel sounds used were the long ‘u’ which forces the mouth into a pout. In short the results were as follows: subjects reported feeling good after an ‘e’ and feeling bad after a ‘u’ sound. Similar studies have been performed with equivalent results.

One asked participants to hold a pen in their mouth either by pouting and holding the pen with their lips or holding it horizontally within their teeth, forcing a smile-like position with the mouth. Their hypotheses are all that there is a clear cause and effect relationship between the physical performance of a smile and the psychological response.

Zajonc went on to explain not only that there is a relationship between the smile and the mood but also why; with interesting theory of blood flow to the brain dictating temperature of the brain. It’s a very interesting study; the most beneficial part is not the why something is how it is, as much as it is about knowing what it is and most importantly the how, how can we use it to our advantage? As they say, you don’t need to study the root in order to pick the fruit.

Finally, our body language; in short, the poses we adopt to make ourselves confident involve making our bodies bigger and nerves tend to make us smaller. A study conducted by Amy Cuddy, Caroline Wilmouth and Dana Carney from Harvard Business School shows the benefits of adopting ‘power poses’ prior to ‘high-stakes social evaluation’. Amy Cuddy gave a fantastic Ted Talk entitled ‘Your body language shapes who you are’.

In short, they asked candidates to adopt either high or low power poses for a two minute period. They found that when high power poses were adopted prior to a controlled job interview, people achieved greater success and were more likely to perform, the opposite was also true. Again this was a blind study, and again the cause and effect seems clear.

We know then that it is important to adopt particular behaviour in order to elicit desirable emotions, which in turn result in more desirable behaviour. Behaviour of course is the single most important factor governing the results we achieve in the external world. Acting as if we are already confident, happy or otherwise is then bound to influence our ability to become so. The old saying ‘fake it until you make it’ could otherwise be amended by adding to it, ‘fake it until you make it true’. Maybe there is value in turning that frown upside down after all.