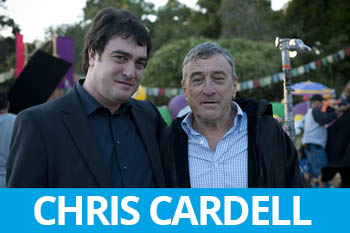 As a child, Chris Cardell dreamt of owning a microphone, so how did a Capital Radio producer become a marketing mastermind? Bernardo Moya found out

Chris Cardell tells me that everyone in business is in marketing. He says it with the confidence of one who has helped numerous businesses succeed. “Everybody asks the question, ‘What should I sell?’” he says. “It’s the wrong first question. The right first question is, ‘Who am I going to sell to?’”

Expressed like that, his clear-sighted marketing approach sounds obvious. That’s because part of his skill is breaking down bewildering marketing options into easily reproduced processes. It works. Cardell’s marketing business, Cardell Media, helps others extend their market reach and build on success.

He certainly didn’t learn these skills at school or college. Marked by a strong rebellious streak his main memory of school is boredom. “I did my O Levels, I did some A Levels. I did okay, but it just bored me… It didn’t seem particularly interesting or relevant… I just didn’t buy into this authority idea.”

He recalls hearing how rock star John Lennon realised at an early age he was smarter than his teachers. “I’m not sure I’d go that far,” Cardell smiles disarmingly, “but it just didn’t inspire me. My main aim at school was to leave.”

Other inspirations hinted at his future career in communication to come, including his deep passion for rock music. When he was six, growing up in Bromley, Kent – “home of David Bowie,” he interjects – he saw a microphone in a music shop window.

“I remember obsessing about this microphone,” he says. “It was £35, which was a lot of money then. I started saving up. I got to about £28 and then somebody told me I would also need an amplifier, so that was my first experience of dreams being shattered,” he recalls.

Something about communication inspired him, but paradoxically he was also very shy. After he fell and lost his milk teeth, no-one could understand him and his mother sent him to elocution lessons. The teacher wrote home to say: ‘Christopher will have a lifetime of problems communicating.’

Thankfully, he grew up feeling different to other kids, and wasn’t swayed by such negative inputs. So, did others influence him more positively? Again, that rock ‘n’ roll influence comes through.

“My big inspiration as a teenager was Paul Weller of The Jam. I was quite shy and introverted, and he just wrote these lyrics about belief in yourself and not buying into authority. He was the first person in my life who said, you can do what you want, you can go and be what you want and all the people around you who are telling you what’s not possible, forget about it.”

One thing that’s clear when Cardell talks about his early days is the way he ‘obsesses’ and commits himself to his goal. That’s exactly what happened with his radio career.

Aged 12, he appeared on Capital Radio on a feature called The Young DJ, in which kids could DJ for 15 minutes. “I remember walking into the studio and deciding this was what I was going to do. It was really weird because it wasn’t even a decision, I just knew.”

After school he joined BRNB radio in Birmingham, then worked for Capital Radio – the top London station. “I ended up working with  Chris Tarrant on his Breakfast Show. I did the news with Chris for three years, so dreams  can come true.”

He says he only realised later that most people weren’t as focussed as him. Which, he adds, is great news for those willing to commit to pursue their dreams. “If you really set your mind on something and you really want to achieve it, you can do it. In a way, it was easier to achieve than  I thought,” though he adds that it took lots of hard work.

After four years with Capital Radio, Cardell launched his own entrepreneurial career. He published a book on the back of a radio documentary he made about Michael Jackson and sold 20,000 copies. Other enterprises were less successful, and he soon realised he needed to understand marketing.

“I went to the States and I learnt from people there. I hopefully got very good at it, thinking it was for me and my business. What happened was some of our clients started asking for marketing help and so I accidentally became a marketing expert.”

When the internet took off, he added web marketing to his expertise. “It allowed us to reach large numbers of people at the same time. Now I have a couple of businesses, but my main business shows entrepreneurs how to do their internet marketing.” He teaches through big seminars as well as smaller classes.

The work has rewards beyond money, such as the businessman who contacted him to say his wife was having a child – and Cardell was responsible.  “He’d been running his business, he’d been struggling. They wanted another kid but didn’t feel they could because of financial reasons.” After Cardell’s tutelage, all that turned around and a new person entered the world.

Nowadays, his attitude to education has completely changed from his schooldays. For him, being taught something useful is the key to motivation. Early in his radio career he was turned down for a job reading the news because he was young and didn’t sound experienced enough. His answer? Contact a former BBC radio announcer and spend a weekend in voice training. The following year he got the job.

“I had a simple belief system in life which I heard articulated later on by people in the field of NLP when they talk about modelling… Go out and find out how they do it and copy and model them.”

Describing himself as “obsessive compulsive”, he admits his media experience has been a huge help. “When you’re in the media, especially if you’re on the journalism side, you discover it’s much easier to get access to people than you think. If you ask nicely and with the right questions, you can get access to pretty much anybody. So I went and found the very best marketing people – not just in my country but on this planet – and I sat down with them and drilled into their brains and found out how they did it.”

In contrast to his childhood, he now talks about the pleasure he draws from education. It never ends, he adds, because there’s constant innovation in marketing. So, what advice would he give to those starting out, and why that question, ‘Who am I going to sell to?’

“There are a couple of decisions people make at the beginning, and sometimes they don’t even realise they’re making them. They will influence literally the rest of their entrepreneurial lives. If you’re having to compete on selling at the lowest price then you’ve got a huge, huge problem. You ideally want a repeat business. Like a hairdresser’s business; you come back again and again, you buy the stuff, the shampoo, again and again, and you refer people again and again.

You want to avoid a business that’s a one-off sale. So those factors: wealthier, high-end buyer, repeat business – I’d start with that. Ask yourself: where can I find those people – and then you insert whatever it is you’re going to sell.”

It’s a great starting point, and one his students have used to build success. After the deep recession of the past five years, it’s certainly one to take on board.