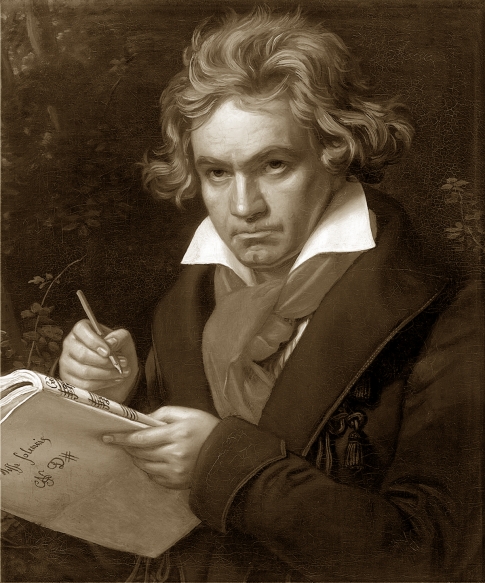 At the time of Ludwig van Beethoven’s birth in late 1770, many children died in infancy. Indeed, four of Beethoven’s infant siblings did not survive. His grandfather already a musician of note during that era, Beethoven had much to live up to. It was suspected by his father, who was his first instructor, as well as by other teachers, that Beethoven was born with prodigious musical talent.

He was quickly rushed into the world of musical preparation, relentlessly studying and practising even as a young child. He became assistant organist to the royal court when he was a teenager, and all appeared to be going well for young Beethoven in his fast rise. After his mother’s death, he took care of his siblings while his father lapsed into depression. Beethoven spent his early adulthood in his hometown, giving piano lessons when he could and making connections in the form of lifelong friends and financiers.

As his home life fell into further disrepair at the hands of his father’s declining health, Beethoven escaped into music, willing his deep well of talent out for the world to see. After his father’s death, Beethoven moved to Vienna, rubbing elbows with and performing for nobility. As the prominence of his name grew, Beethoven’s legend began to form. He was often mentioned in the same breath as Mozart, cementing his elite status.

Enjoyment of his fame and hard fought fortune was not to last, as Beethoven began to go deaf when he was still in his twenties. As was his way since birth, Beethoven fought his way through his cruel-twist-of-fate hearing disease to become one of the most, if not the most iconic musician and composer in history.