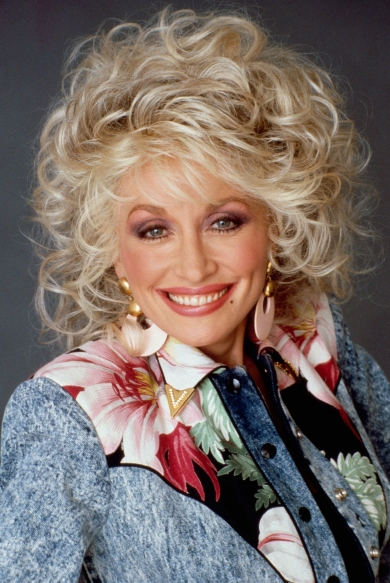 Dolly Parton was born in rural Tennessee in 1946. She was brought up in the rustic Smoky Mountains in a cabin that was really one large room. Parton’s parents did what they could to keep her and her siblings clothed and under a roof; indeed they were known for trading for goods and services because they had no money.

Parton’s natural singing and performing ability became apparent from a young age. She was regularly booking gigs on Tennessee radio stations by the age of ten. When she was barely a teenager she appeared at the legendary Grand Ole Opry. By the time she was 18, Parton was living in Nashville, where she first honed her skills writing songs for other artists. This talent would serve her well in the future.

Parton was soon under contract with her first record label, mostly recording material that she herself wrote, a rare accomplishment for a woman of that era.

After a steady stream of moderately successful singles and a recurring appearance on a country-themed television series, Parton had her first true smash hit in 1973 with the song Jolene. The next year she wrote the song that has perhaps made her most of her fortune, I Will Always Love You. It went to number one on the country charts at the time. It was also famously recorded by Whitney Houston in 1992, bringing the song to a whole new generation. Parton saw her profile grow throughout the 1980s and 90s with appearances in hit films such as 9 to 5.

Dolly Parton remains a force in country music, TV, film, and popular entertainment. She is an entertainment icon who
has demonstrated the power of patience on the road to achieving a dream.