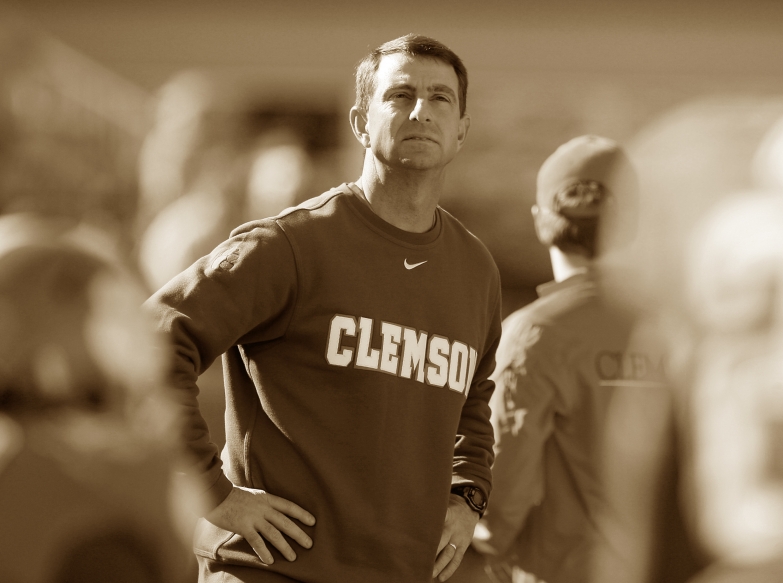 Dabo Swinney is a collegiate American football coach who took a long-shot team to the national championship in 2015. Swinney was born in 1969 Alabama, at a time when American football was gaining exponential popularity. A born hard worker, Swinney from a young age had the fortitude to look past the rough patches his family was experiencing with increasing frequency before he was even ten years old.

Swinney’s father was an alcoholic whose business was failing. A bad combination for anyone, it played hard on a marriage with multiple children. Often returning home from school to loud fights and violence, Swinney would attempt to avoid these confrontations at all costs. The family business finally went under and the end of his parents’ marriage followed shortly thereafter.

High school saw Swinney launch himself into sports so he could distance himself from family life. Amidst the turmoil, he then attended college at the University of Alabama, receiving both undergraduate and graduate degrees. While there, he walked on to the football team and was part of a national championship-winning season. Soon after he would begin his coaching career as an assistant on that same team.

Swinney took a detour into real estate brokerage in the early 2000s after the entire University of Alabama football coaching staff was fired. After a hiatus from coaching, he received an offer he couldn’t refuse from Clemson University. Over more than ten seasons, Swinney worked his way up the coaching ladder there, excelling at every position. Assuming the programme’s head coaching vacancy in 2009, Dabo Swinney steadily turned the team into a winning powerhouse. He had let go of his past’s demons to take the team to an undefeated 2015 season, going on to play for the National Championship.