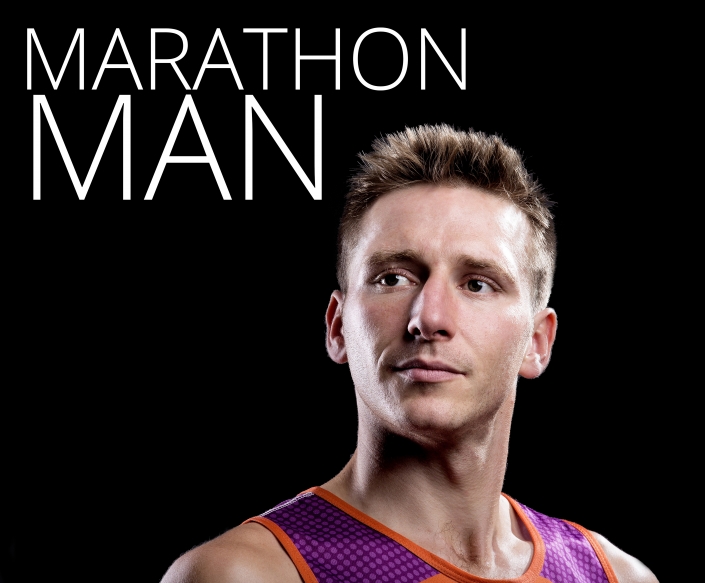 With a world record to break and a plan to transform the lives of disadvantaged children around the globe, Rob Young is a man on a mission

For most people, running a marathon would be a life achievement, a tick on the bucket list. When Rob Young watched the London Marathon last year, he was inspired by the amazing fundraising stories that he heard about. While the physical feat of running 26 miles and 385 yards (42,195km) was impressive enough, the reasons for enduring the gruelling road race were as individual as the whacky costumes that many of the entrants wore to raise £261.4m for charities and good causes.

Young was inspired to run a marathon, but his partner, Joanna, told him he’d never do it. Many of us would have concurred, turned over and moved on to the next thing. Thankfully, Rob Young is unlike most people.

The next day Young set out to run his first marathon, and decided that he would run at least one every day for the consecutive 364 days, to beat the current world record of 366 in a year.

As he was holding down a 9-5 job to support his young family, Young’s running had to fit in around this, and so he often ran from 3-7am each morning before heading off to official marathons around the UK at the weekend, often in a kilt in recognition of his Scottish roots. Sleep was the first sacrifice, and despite being self-funded (refusing to take a penny of the money raised by his challenge to support him and his family) Young has now left his job to concentrate fully on running. Already 7,200 miles into his challenge, he has headed to America to participate – the only European to do so – in the USA Super-Marathon Series, which covers snow-topped mountains and arid desert across 12 states from the Pacific to the Atlantic.

Mentally and physically strong, Young believes the ability to run a marathon lies within all of us. “I think you just have to keep going,” he says. “For the first month there are problems as your body adapts to the amount of activity – your feet blister and go hard – but after that your body gets into a routine, your mental attitude changes and you think, ‘I can do it’.

“I was a non-marathon runner and went into the process without any background on the sport, but from the first day I’ve had help from friends and family. I thought marathon running was an individual sport, but I quickly realised that people will support and advise you, and there’s a strong sense of community.”

Fundraising is central to his race to break the record, and the three charities that he has chosen are integral to Young’s amazing story. As a child, he suffered unimaginable abuse at the hands of his father. Beaten daily, he still carries scars on his body, but his suffering went much further.

Sometimes his father would zip him into a suitcase and push him down the stairs, or dangle him over the bannisters at the top of the stairs by one leg. He was told that if he cried or made a noise, he would be dropped and so he learnt to close his eyes and focus on other things.

One evening, aged six, he heard his father crash into the house. Knowing he was angry, he anticipated a bad beating. The usual insults, beating and dangling ensued, and when Young’s mother tried to intervene, she was beaten and told to stay out of the way. His father then tied a rope to Young’s neck and hung him on an old-fashioned coat hanger near the front door. “It seems strange now,” he says, “but I remember feeling relieved that it was all going to finally come to an end. I remember the sensation of having no air to breathe and struggling as my father held my legs. It then got very scary before he decided to let me down. Needless to say I’m very glad now that he did.”

Later that night, as his mother put him to bed, Young told her that he couldn’t cope anymore, that he was in too much pain. She promised to take him away as soon as he could walk again. Several days later, they left with his sister and were placed in a safe house in Yorkshire, although his father tracked them down. Feeling unsafe, they left by foot to walk south to his grandfather’s house in Hampshire, sleeping overnight in a ditch.

Along the way, a car stopped in front of them on the motorway. A middle-aged man got out and approached them, but Young, just a child, stood in front of his mother and sister to defend them. Seeing they were scared, the man asked his wife to speak to them and explain that they were concerned for their wellbeing, having seen them on the road earlier that day.

The couple offered to drive them the rest of the way, buying them a meal at a service station on the way. “The taste of that cheap roadside burger was like heaven!” says Young. “I had been used to very poor quality food at home, so this was an unprecedented treat. To this day, that burger is still the tastiest thing I have ever eaten (or at least that’s how I remember it). I will never forget that act of kindness from complete strangers and how it gave me the hope of freedom.”

The feeling of gratitude and hope is something that has stuck with Young, and it’s now guiding his life journey to fundraise for children’s charities, the NSPCC, GOSH and Dreams Come True, a commitment that he says will continue long after the last marathon is run.

Although a court order prevented Young’s father from making contact, the toll on his mother left her feeling unable to cope, and so he was placed in an orphanage. Exposed to an unstructured environment with children twice his age, Young endured many frightening experiences and was bullied into doing things that distressed others. Anger became his defence mechanism, and it was only at 11 that he was moved to an orphanage were he felt safe and started to enjoy school.

Young was fostered shortly afterwards by the deputy headmaster of an independent school who taught him traditional values and skills for life, and supported his education. “To this day, I believe he enabled me to become the person I am today,” explains Young. “All my best aspects developed under his watchful eye. If it hadn’t been for him, I wouldn’t have passed my exams and been able to prepare for a good life.”

After school, Young joined the British Army’s Royal Signal Corps, and it was here that his lifelong love of athletics was nurtured. “As a kid, I always loved sport and had a very competitive nature, always giving 100 per cent, always pushing myself,” says Young.

“I enjoyed athletics and I remember turning up to meetings and competing in all kinds of events. If other athletes failed to turn up, I would happily take their spot.” And compete he did – 5km, 3,000m steeple chase, 1,500m, 400m hurdles and flat, 100m relay, shot put, hammer, pole vault, javelin, the list is endless. Alongside he represented Great Britain at the Biathlon event and was selected for the GB junior duathlon team.

From here, Young became a pro-cyclist, although the birth of first his daughter, Olivia, and later a son, Alexander-Lui, with Joanna, meant he was forced to concentrate on looking after his young family.

“I worked as a manager of a motor parts company, but I gave it up about 10 weeks ago to concentrate on running. I don’t have sponsors, and all the money that I raise is going to my charities. My approach is different, I don’t push for sponsorship, but friends are helping us out. Although I am running, it’s equally tough for Joanna, taking care of Alexander and keeping things together back home, particularly while I’m away in the States.”

Midway through the US challenge, Young will fly back to the UK to participate in the Virgin Money London Marathon. “It will be very special,” he says. “I am hugely looking forward to it, and it seems strange that it was watching that day, a year ago, that triggered all of this.”

For a man who has lived on adrenaline for a year, the inevitable question is, what next? Although not bothered by celebrity and stardom, Young has met a number of famous people over the last few months, including Sir Ranulph Fiennes. “We talked about walking across the North Pole for six months, a challenge not previously thought possible,” explains Young. “I would definitely consider it, but I have also thought about the record for the most marathon miles in one go, without sleep, and I reckon I could go for 500 miles.”

Hand in hand with his physical achievements, Young also has plans to continue making a positive difference to the lives of disadvantaged children. “I will always look after my three charities,” he says, “and they fit into my vision. I want to get kids into sport and to let those who have endured hardship or abuse know that they don’t need to be ashamed of the past, they can move forwards and overcome it, it doesn’t have to define their whole life.

“From the age of 10, I wanted to create self-sustaining schools across the world, to take kids off the streets and rubbish tips, get them into education and create their success stories. The reality is that a child on the street is likely to be abused and become seriously unwell if they are neglected. It’s shocking that the world allows children to be treated as rubbish and we don’t consider them as people. I want to create something to change this, where each generation can take care of the next.”

Young’s story is an inspiring one, overcoming extreme adversity to change both his own life and that of others, but he believes that all of us have the power to make a positive difference in the world. “Anyone can do it,” he says. “A good heart and a strong mind will carry you through.”

To learn more about Rob Young’s challenge and to donate to support the work of the NSPCC, GOSH and Dreams Come True, visit marathonmanuk.com