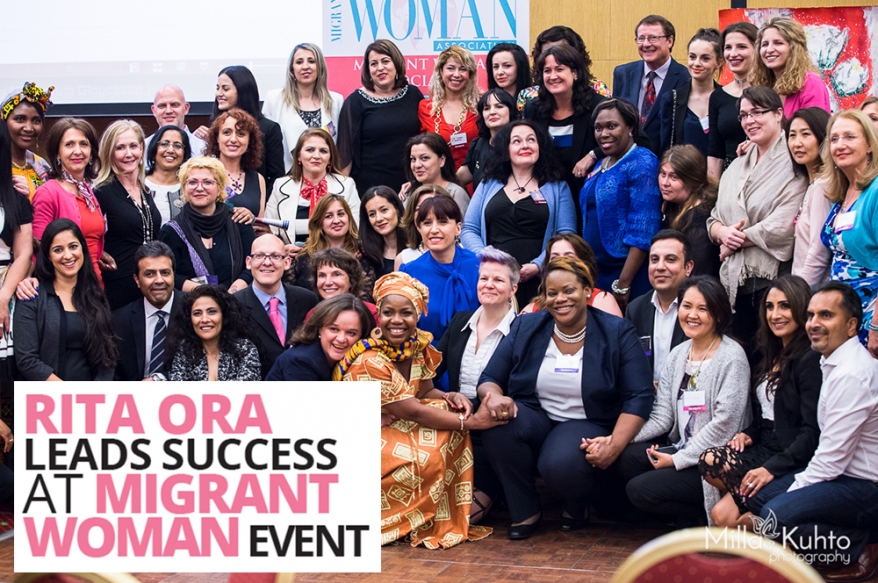 Beauty, diversity and inspiration in abundance, with singer Rita Ora winning the Award for Renowned Female Achiever, The Best You reports from the Migrant Woman Conference and Awards 2016

More than 250 women and men filled the Millennium Gloucester Hotel for the second annual Migrant Woman Conference and Awards in late May. The one-day event focused on migrant women’s stories of overcoming barriers and achieving success in the UK, which brought together representatives from more than 20 countries and six continents.

The conference received huge acclaim from delegates on social media, with one commenting: “It was fast paced and varied. It also had elements of surprise and a lot of fun and laughter woven into the serious and valuable tips and information.” Another wrote, “I found it very educational and inspirational, the gathering of so many inspiring, powerful and highly talented women from many different countries, being able to share their experiences.”

The event featured panel discussions on a range of topics, mixed with cultural and uplifting entertainment including Brazilian singing and carnival dancing, plus Russian and Albanian dancers, culminating with the Migrant Woman of the Year Awards presentations.

The main panel session was chaired by Mirela Sula, founder of Migrant Woman Talks and editor-in-chief of Global Woman magazine; Nazek Ramadan, originally from Beirut, Lebanon, founder and executive director of Migrant Voice; and Zrinka Bralo, chief executive of Migrants Organise, journalist and refugee from Sarajevo Bosnia. They discussed ‘What it means to be a migrant and the role of women in migration’.

Mirela Sula said of the event: “We’re so proud of the achievements of each and everyone involved with this year’s Migrant Woman Conference and Awards. It’s truly humbling to be in the presence of these incredible women from across the world and to celebrate everything they have accomplished in their respective fields. We’ve seen the event grow noticeably since its first incarnation, and we can’t wait to see how it will develop in the years to come.”

Rita Ora – Lirim Greiçevci, Kosovar ambassador in London, received the Renowned Female Achiever award on behalf of Rita Ora, and said, “Thank you to those who voted for her and congratulations to Migrant Woman team for the great work that they are doing to promote the values of migrant women in Great Britain”.

Zenobia Nadirshaw won Inspiring Woman of the Year and was commended by the judges for spending the past 40 years fighting for the rights of vulnerable people – a highly important task that often goes unnoticed by society.

Rehab Jameel, received the award for Community Champion of the Year, for working on a very important women’s and girls’ rights issue, which affect individuals, communities and the integration of women into UK society and is bringing solace and hope to women who are victims of FGM.

Betty Encinales won Entrepreneur of the Year for proving that a will to succeed against all odds is possible. A successful businesswoman and philanthropist, despite all the challenges she has faced, among them the kidnapping of her father, a serious accident and becoming self-taught in the English language.

Adam Strong was awarded Best Man for his contribution to the lives of so many women through Association of Extraordinary PAs (AEPAS), as well as continual motivation, support and much-needed recognition that he provides to them.

Migrant Woman Talks is a platform that has been created in order to inspire and empower migrant women by celebrating successful achievers, to create a growing momentum, and to build a like-minded community that can collectively achieve even greater things. It was the initiative of Mirela Sula, editor-in-chief of Migrant Woman magazine, launched in April 2014. The aim of this platform is not to complain, nor to portray an image of being the victim, or to blame, but to feel proud of what we are, and who we are, and to invite other women to feel positive about themselves and their future.

Global Woman co-hosts monthly networking breakfasts, held in central London, which tap into human emotions through open and frank sharing in a safe environment. They provide a magical form of empowerment that is hard to describe as a scripted formula. See more at https://www.youtube.com/watch?v=MnE2DuutUnc
Global Woman Summit http://www.globalwomansummit.com taking place on 30-31 July 2016 was created by Mirela Sula, in collaboration with the Laszlo Institute of Research and Club of Budapest, through her associations with Ervin Laszlo and Joe St Clair. The main theme of the summit is A new paradigm for changing the world.