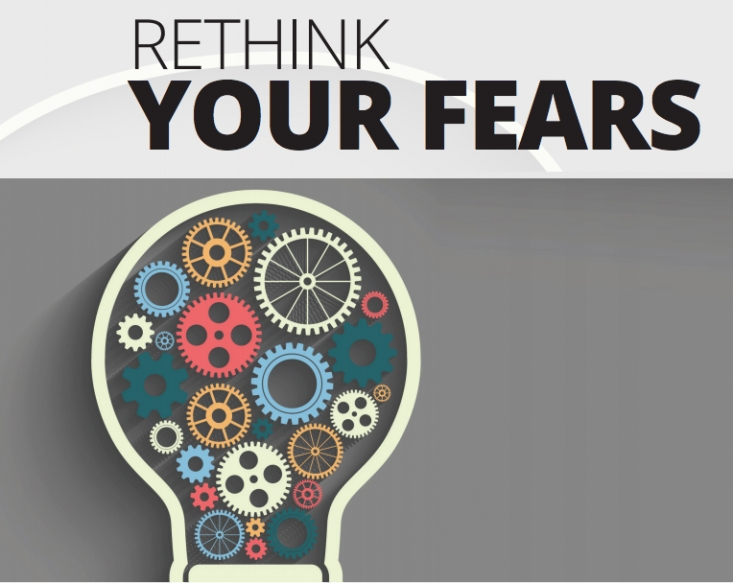 Think of something you really, really like. Something simple like cupcakes, kittens or organising a shelf of books so the spines form a perfect spectrum of rainbow colour (just me?).

Take a moment to consider your particular mental image of that thing (actually do this. I’ll wait). Is that picture in colour or black and white? Where exactly on your internal screen of representation is it (left, right, top, bottom, dead centre…)? Is it big or small? Is it near or far? Moving or still? Light or dark?

Now think of something you really, really dislike. I’m talking cockroaches, spiders or clumps of slimy hair in the plughole… Take a look at the image you have of that thing and ask yourself the same questions. The two images will appear differently to you in some way.

The subtle and automatic difference between those visual representations is largely responsible for the different ways in which you’d be likely to act when confronted with those things. This mental coding system is ever-present and immensely powerful yet most of us have no idea it’s even going on until we’re asked to analyse our thoughts.

Everything you experience and every thought you have is categorised and unconsciously tagged with a specific combination of sense properties like those you just came up with. Your mind does this so that you’ll remember how you should feel about that thing in the future. The example above looked at visual representations, but all your sense experiences can be broken down into sub-categories in a similar way. It’s like a personalised symbolic language that you speak fluently and instantaneously. In neuro-linguistic programming, we call these properties submodalities (or SMds).

The modalities are the senses: visual (seeing), auditory (hearing), kinaesthetic (feeling), olfactory (smelling) and gustatory (tasting). The word submodalities refers to the ways in which you can divide and categorise information from each of the sense modalities. In essence, SMds are the properties of your thoughts; the particular way in which you see the image, hear the sound, or feel the feeling.

The reason this information is so useful to elicit (either as a therapist or for yourself) is that you can manipulate SMds to help the mind feel differently about things. If, for example, I could start seeing my inner representation of cockroaches in my fluffy kitten SMd recipe, then I might be able to write this article without a little grimace appearing on my face every time I write the word cockroaches.

This doesn’t just apply to our internal imagery; it’s also being used unconsciously to filter and determine our experience of the external world. Submodality encoding is something that happens before information acquired through the senses reaches your conscious awareness. This means that by the time you know you’re looking at a kitten, your unconscious has already decided to package the incoming information in your kitten SMd recipe.

This, in turn, means that you don’t need to decide how you feel about a kitten each time you see one. You instantly know what your pre-programmed feeling and response is, so unless something happens to interrupt your normal pattern of behaviour, you just go ahead and do it. The SMd system saves us a great deal of time and energy in assessing and then relating appropriately to the world around us.

In solving someone’s emotional or behavioural problem, SMds can be invaluable information. Our problems are patterns. They happen in a set order which repeats in exactly the same way each time we go through them. It goes like this: first there’s a trigger (this is usually environmental, so something we see/hear/feel/smell/taste); then there’s a matching process where our mind decides what type of thing it is experiencing based on our past experience (’this is the same as that other thing that happened’); this produces an emotion (a ’gut instinct’) about the thing based on the match; finally, all this determines the behaviour we end up producing.

Let’s use an issue with authority figures as an example. Picture someone who finds himself anxious and unable to speak intelligently every time his boss asks him a direct question. It’s only afterwards, once he’s reached a safe distance from his boss, that he returns to his senses and kicks himself for acting like an inarticulate idiot (again). This all happens because his unconscious is packaging the boss in a SMd combination that says ‘fear this’ or ‘danger!’.

It’s likely to be doing so because it’s matching the current environmental content (the boss) to a nasty memory from childhood; something like a particularly mean teacher at school. Although his boss is not exactly the same as that teacher, the unconscious mind is helpfully lumping them into the same category of things to steer clear of, just to be on the safe side.

There are literally hundreds of different ways that one can utilise or manipulate their submodality recipes in order to create positive change. They form the basis of all thought, so the possibilities extend much further than simple likes and dislikes. The SMds of bodily sensations can be adjusted to reduce the experience of unnecessary pain in people with chronic illness (or just with a stress headache); belief systems can be influenced; values shifted, so that a different level of importance is unconsciously placed on things (this means you can find yourself naturally doing things you previously avoided, or not doing the things you wished you didn’t). Submodality manipulation is commonly used to let go of negative emotions (such as anxiety or anger) in the moment. It’s a fantastic tool for performers and athletes.

I think that understanding this coding system should be taught in primary schools. It’s so simple and so powerful, yet most of us are completely unaware that we can influence the way we feel about things as easily as we can.

In order to change your SMd recipes, you first need to identify and analyse the problem pattern you want to change, discern the modality it presents itself within, and then elicit the submodalities of those thoughts in order to alter them.

This comes up time and time again in sessions with sports people. In many cases, just before an athlete makes an unforced error, such as sending a golf ball into the trees, playing a double fault in tennis or missing a penalty in football, they might hear a voice in their mind saying something like: ‘you’re going to mess this up’, or perhaps: ‘this is really important so don’t mess it up!’ (which, of course, usually brings about the same disastrous outcome). I should be clear that we won’t all hear a voice before we screw things up, for some it’s just a feeling, for others it could be a mental image. Sometimes it’s a combination of all these things. If, however, an inner voice is a factor, then the SMd recipe will be partly to blame for the resultant behaviour.

Since problem patterns fire in a their own set order, interrupting that order –  like introducing a circuit breaker – can stop the remainder of the pattern from firing. This means a different outcome becomes possible. An intentional SMd change is one of the options available to create this diversion.

The most obvious element to alter in the case of the golfer would be that voice (you could also look at the SMds of the sinking feeling, but as the voice comes first, by targeting that you’re killing two birds with one stone).

Step one is to elicit the voice’s SMd recipe by answering these questions.

Once she has the combination of variables, she can try changing them, one at a time, to see which differences affect the feeling triggered by the voice. Typically, one or two of the submodalities will make a substantial difference, whereas the majority may make little to no difference at all. Those that change things dramatically are called ‘drivers’.

Location is a common driver. Let’s say our golfer notices a big shift when she chooses to move the source of the voice from the left to the right-hand side of her head. Typically, when you change a submodality driver of your negative self-talk, the first thing you’ll notice is that the voice seems to lose its power. It might seem inconsequential or perhaps even silly in its new position.

You may find that other SMds change automatically when a driver is altered. For example, once on the right, our golfer might notice the voice also sounding more distant, or quieter. At the end of the day, all that really matters is that it feels different (specifically, that it feels better).

Armed with this information, the athlete can counter the old negative voice by taking a moment to move it to the right-hand side should she hear it. Had the driver been a variation in pitch, she could choose to hear it in a higher or lower tone to change the outcome; had it been tempo, she could speed it up or slow it down accordingly. There really are no rules, you can just keep trying different things until you notice a difference. Then you have your process.

What the SMd change does is temporarily suspend the self-doubt that was at the root of the problem. It opens up a window of freedom from old limitations which can be used to focus on something more beneficial like a visualisation of the ball going where it should (which, by the way, she could choose to see with an SMd recipe associated with success or ease, to really up her chances of doing well).

You can use this language to let go of a problematic feeling, a disturbing visual or a distracting sound. Sometimes making the change becomes a tool that you continually use, at others it’s something that only needs to be done a few times before your unconscious chooses to make the change more permanent and automatic.

Part of the potency of a process like this is that it gives you back a sense of control, even mastery of your feelings. We tend to feel as though we’re at the mercy of our emotions, so introducing a regular practice which proves the opposite can be enormously empowering

Hazel Gale is a cognitive hypnotherapist, mental coach and world champion athlete. Connect with her at hazelgale.co.uk