Recipe for success: an interview with Perween Warsi by Bernardo Moya

Home Recipe for success: an interview with Perween Warsi by Bernardo Moya 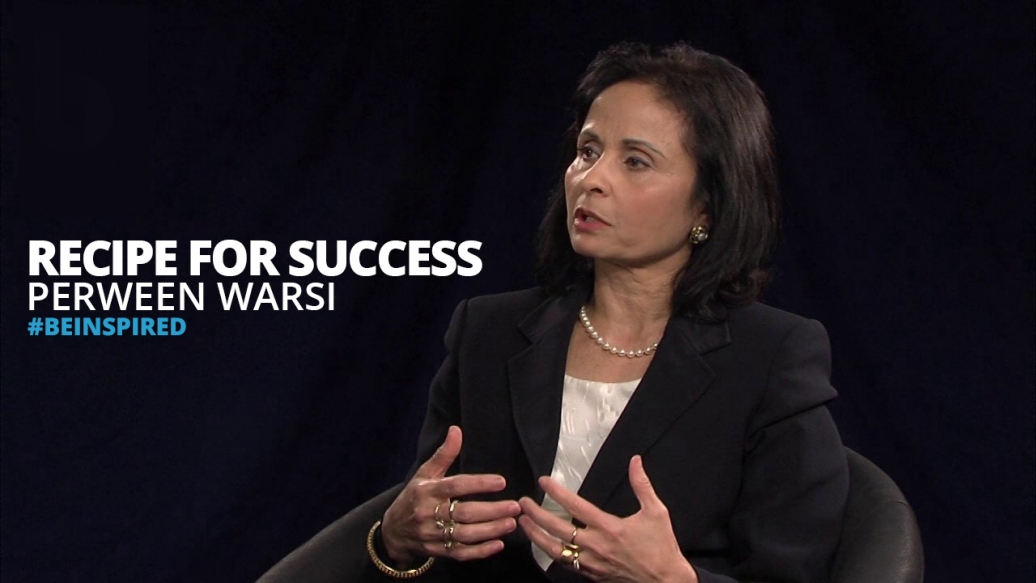 Described as Britain’s “Curry Queen”, Perween Warsi came to the UK aged 19 knowing nothing about Britain, but plenty about good food. Nearly 40 years on she owns a hugely successful food manufacturer, S & A Foods and her net worth is estimated at £70 million. Bernardo Moya asks her to share her recipe for success.

I notice as soon as Perween Warsi sits down that she has a smile that puts me immediately at ease and eyes that twinkle with quick-thinking intelligence. Perween’s story of success is an impressive one. From an initial outlay of £2.50 making food on her kitchen table, she went on to become a major food producer in the UK. So, what nourished her confidence and vision to make that happen?

“I had the most exciting time as a child,” she tells me. Her father was a civil engineer who was frequently transferred to different parts of India. “It was a headache for my mum because of the packing and unpacking,” she says. “But for us it was absolutely great fun.”

The constant moving taught her three things: “One, learn to make new friends; accept, embrace and enjoy change; and also learn to adapt to new situations.”

These attitudes were vital to her later business life.

Another ingredient lay in having a very close family – parents, five children and maternal grandmother (or nana), who would always be there for one another. And her nana added another part of the mix – the all-pervasive presence of food.

“She was a treasure. She was full of wisdom.” A fantastic cook, despite being disabled, Perween recalls: “Every morning her cook would bring all the ingredients to her, the herbs, the spices, whatever and she would spoon it out to make sure that the dishes were absolutely perfect.” This obsession with food was passed on to Perween.

“So we were a foody family. And a very close family as well. And the closeness in family has been our greatest strength… it was a wonderful childhood.”

Her schooldays also reveal something of the attitude that has guided Perween through life. She was ambitious and keen to improve herself from early on, wanting to learn English from an early age, and dreaming of going to boarding school rather than the local school. Her inspiration she puts down to two particular drives which she defines as “action” and “reaction.” The action side is personified by the people who inspired and influenced her. For Perween, these were her parents.

“My parents were my heroes,” she recalls. She admired her father for his commitment and passion for his work as well as his integrity and commitment to family. She admired her mum for her “daring attitude, speaking her mind and challenging the norm.”

“They both taught me one thing, and that was just think about others and help others who are not as fortunate as you are. So they were my heroes, they are the ones who inspired me.”

She was also inspired by her own reaction to the people she saw for whom she felt sorry. “I saw poverty around me. I saw dependent women. I saw uncut diamonds, that I called them, who had the capability and ability and… were very creative, who were not given the opportunity… I just wanted to be different so I can do something for those people and stand on my own two feet.”

Perween’s opportunity came when she moved to England. Coming from a conservative muslim background, Perween married her husband by arranged marriage when she was 17. He later travelled to the UK to train as a doctor, and Perween joined him in 1975 with her first young child when she was 19.

“I was a young girl who had never been even to a corner shop on my own. And then one day I find myself at the international airport with her one-year-old child in my arms and £3 in my handbag. I was travelling 4,000 plus miles away from Delhi to Heathrow to meet my husband all on my own, no help, no support… And when I came everything was different. There was nothing familiar. The culture, the people, the language. The food.”

That last became a bugbear for Perween. She settled in thanks to her early experiences of constantly relocating, but the food was a problem.

“Missing my family was tough enough, but missing my coriander, my chillies, aubergines all the wonderful fruit was just heartbreaking. And all I could get was cauliflower, potatoes and peas.”

It was when she tasted a supermarket samosa and was appalled with the experience that she decided to do something about it.

“I wanted to change the perception of Indian food from being bland and boring, poor quality, uninspiring to really amazing Indian food that people can fall in love with. That’s the food I was used to. What I saw here was just not good enough. It wasn’t like mum’s cooking… And literally, that’s why I started the business.”

Though she had no plan, she had a vision – seeing the whole nation enjoying her food. She started selling into a local takeaway and deli and then into local shops. But Perween wanted the whole of the UK to taste great Indian food, and that’s when she approached the major supermarkets. She made hundreds of calls before Asda agreed to include her offer in a blind taste panel.

After weeks of waiting, Asda awarded her the business. “It was fantastic news, absolutely wonderful, something I had been waiting for. But then very quickly I realised that whoops I was still in my kitchen, I didn’t have a factory.

But I believe that in life, in relationships, you have to be honest and up front. That’s the way to build relationships… So we told the Asda team… You can imagine the silence in the room! But they appreciated the honesty and openness so the relationship has built on those fundamentals. We came back, quickly set up a small unit and started producing snacks from that factory.”

Later, Perween expanded the business into the ready-to-eat meals market, and today her company produces a variety of ethnic foods; Indian, Oriental, Caribbean, and Mexican. From five ladies and her husband helping her at home, she now has 500 people working in her Derby factory.

Along the way, she sold shares in the company to venture capitalist group 3i, to raise funding. But when 3i went bust in 2003, she was able to buy the company back. Today, it’s a massive business with a £65 million annual turnover.

So, what is the secret recipe for her success?

“I wish there was a magic answer. Obviously the vision, the passion for the business and the product that you sell. You’ve got to believe in it. Knowledge is absolutely key. Knowledge about your product, about your business. I know the ins and outs of my business because I’ve worked my way up and done everything. Really knowing your people because their motivation, their engagement is vitally important. Knowing your customers and your market. Knowing your facts and figures, because they tell you a story which direction the business is going. And then obviously determination, focus. Those are the ingredients.”

And her drive? What makes it all worthwhile?

“Designing, developing, creating wonderful food.” She smiles again, with those bright eyes conveying the passion that in the end is at the heart of her success: “Taking a handful of ingredients, putting my magic spices and flavours and making it tasty. Wow!”